Bret Baier was trying so hard to win, he forgot to ask any real questions 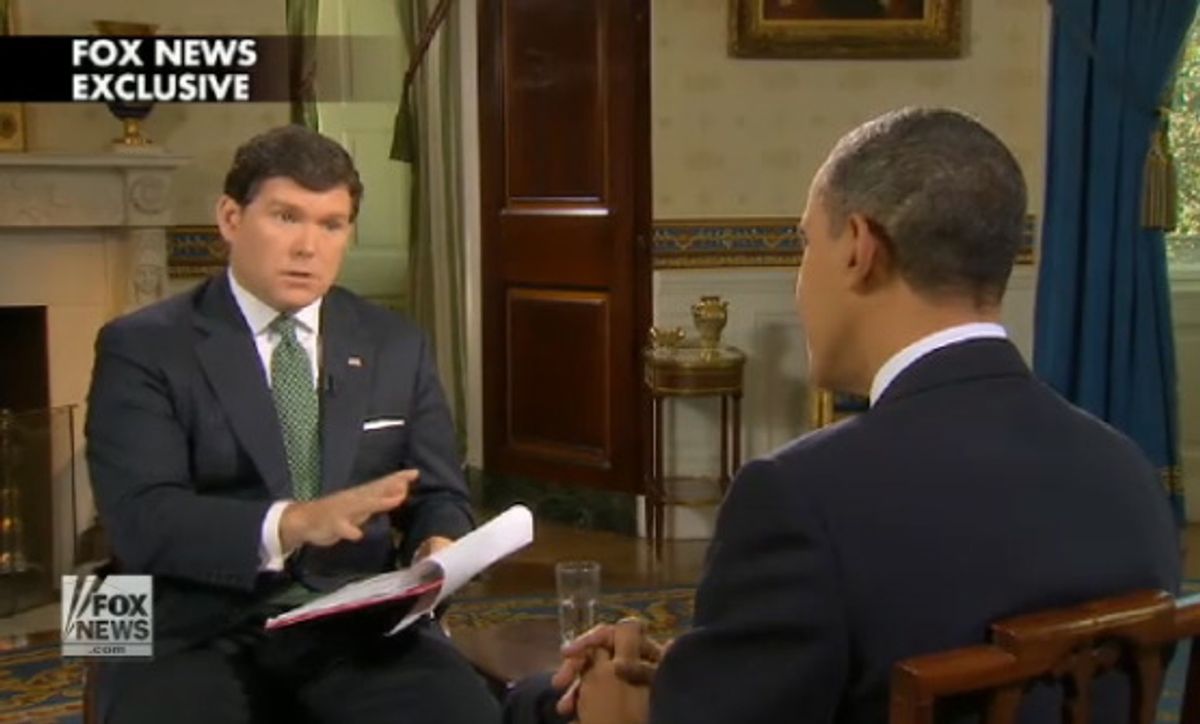 It’s a pretty special thing to get the chance to sit down with the president of the United States, in the White House, and ask him hard questions about his decisions and ideas. But when Fox News’ Bret Baier did it yesterday, he seemed to think he was doing one of those football sideline interviews, or possibly quizzing a tearfully apologetic celebrity burnout. Baier seemed not to be expecting a president who was not only able to answer questions fluidly, but was largely uninterested in the peripheral garbage that obsesses broadcast journalists like himself.

The reporter leapt in at one point by quoting an e-mail to Fox, which asked, "If the bill is so good for all of us, why all the intimidation, arm twisting, seedy deals, and parliamentary trickery necessary to pass a bill, when you have an overwhelming majority in both houses and the presidency?"

As with each instance, Obama explained that he cared about the substance of the bill, not the procedure by which it passed. This exchange followed.

BAIER: OK, back to the original question.

OBAMA: The key is to make sure that we vote -- we have a vote on whether or not we're going to maintain the status quo, or whether we're going to reform the system.

BAIER: So you support the deem and pass rule?

BAIER: You're saying that's that vote.

Here I’m cutting out a lengthy response from Obama, who patiently explains again that, while it’s reasonable to oppose the healthcare bill on the merits, it’s silly to talk so much about House rules. What follows:

BAIER: Monday in Ohio, you called for courage in the health care debate. At the same time, House Speaker Pelosi was saying this to reporters about the deem and pass rule: "I like it, this scenario, because people don't have to vote on the Senate bill." Is that the kind of courage that you're talking about?

This exchange pretty much showcases the tone of the whole interview. Baier refused to let the president pin him down on substance. When Obama tried to talk about the content of the healthcare bill, Baier would cut him off. The president repeatedly had to ask his interviewer to be allowed to finish, but it all seemed a little fruitless. His interviewer just wanted to dance around the edges of the issues at stake.

It's more fun, generally, to make fun of bad journalism than to shake one's head and cluck at it. But Baier really did blow an amazing opportunity. The truth is that it doesn't take a tea partier, or even an opponent of the healthcare reform bill to see that it is indeed riddled with flaws. These should be perfectly identifiable to someone on the right just as well as someone on the left. Baier's inability to move in from Sean Hannity-type canards about healthcare reform toward a genuine conversation is deeply revealing. The guy just doesn't seem interested in what works or doesn’t, or how the law might affect various people. (An exception here might be the conversation he had with the president about carve-outs from Medicare, except that all he was able to do was quote various experts without engaging on the substance.)

Instead, he wanted to talk about how healthcare is "one-sixth of our economy" -- as if the president is organizing a mass-scale collectivization of a major industry like Chairman Mao or Stalin. He chose to air the frequently heard complaints about "special deals," which, whether they are slightly unsavory or not, are fundamentally trivial. He wanted to talk about healthcare, in other words, however he could without talking about healthcare.

But possibly the most revealing moment came in the brief follow-up interview on foreign policy. Amid standard fare about how the U.S. is getting along with Israel, Baier tossed in a question about Iran. But he didn’t ask how the president thought he could prevent nuclear proliferation there, or even the typical, tired questions about whether the president would engage or rule out the use of force. Instead, Baier asked, "If Iran gets a nuclear weapon before the end of your term, will your foreign policy be a failure?"

Get that? The reason Iran is important isn’t geostrategic. It’s not about the security of the United States, or of Israel, or the human rights of people in the country or around the region. It matters because it's another area where the president can be assigned a grade by the pundit class.

Maybe the Fox folks got so used to George W. Bush that they don’t know how to take any president seriously. Or maybe their problem is with the basic format, which they view as a competition, rather than a conversation. As Brit Hume complained afterward about the reporter’s position in presidential interviews in general, "You really can't win."