The 1-year-olds, whose trash-raiding mother was killed last summer, were taken to dens in the Carson Range 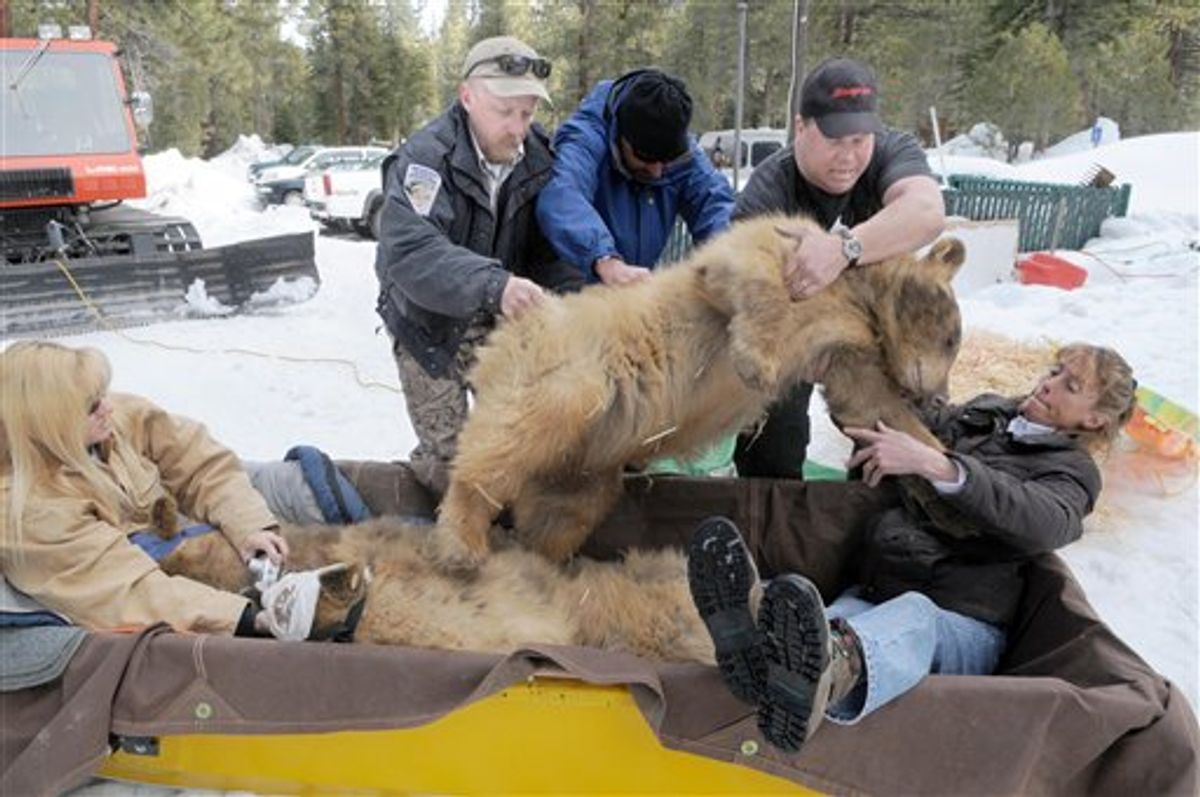 In this March 17, 2010 photo, a yearling brown bear cub weighing close to 200 pounds is placed on the lap of Linda Sugasa, right, while Wendy Nelson cradles two others in a toboggan en route to their new home in the Marlette Lake area near Lake Tahoe, Nev. The cubs, triplets, were orphaned when their mother had to be put down. (AP Photo/The Gazette Journal, Marilyn Newton) (AP)
--

Three bear cubs orphaned by their mother's life of crime have been given a new lease on life in the Nevada outback.

Biologists and volunteers used snowmobiles and sleds Wednesday to haul the 200-pound, 1-year old bears to artificial dens in the Carson Range along the eastern Sierra southwest of Reno.

After the snow melts, experts hope the bears will emerge as natural backcountry wanderers, not the trash-raiding troublemakers they were learning to be when wildlife officials were forced to kill their mother last summer.

"I'm glad they're out and where they need to be," said Lynda Sugasa, who with her husband, David, raised the orphaned cubs for nine months at the Safe Haven Rescue Zoo in a remote area near Winnemucca.

Mother bear had a long history of trouble, beginning in 2006 by breaking into homes in the Stateline and Kingsbury Grade areas, said Carl Lackey, a biologist and bear expert with the Nevada Department of Wildlife.

"She was a very big troublemaker," he said.

As she had done with previous litters, she was teaching the three cubs to break into homes and raid bear traps for food.

Safe Haven Rescue Zoo handlers were careful to minimize any contact between the animals and humans, hoping to maintain the typically skittish attitude bears have toward people. The cubs were fed natural vegetation, deer carcasses, "anything they would find in the wild," Sugasa said.

Hauled 7 miles into the snowy mountains, the tranquilized bears were placed in partially buried dog kennels packed with a little straw and surrounded with piles of snow.

"They'll probably come out of the den and wonder what the heck happened. Then, they may crawl back in or go into another den," Lackey said. "There's no rules."

In a month or so, the bears should be out wandering the woods. They were tagged for identification, and their movements will be tracked as part of ongoing studies.

Lackey said there's a good chance the bears will adapt to a life in the wild and avoid their mother's fate. Since the late 1990s, the wildlife agency has placed 15 orphaned cubs in dens, and only two came back as habitual nuisance bears.

"History shows very few of these cubs return to cause problems," Lackey said. "I'm optimistic they're going to be good little bears."