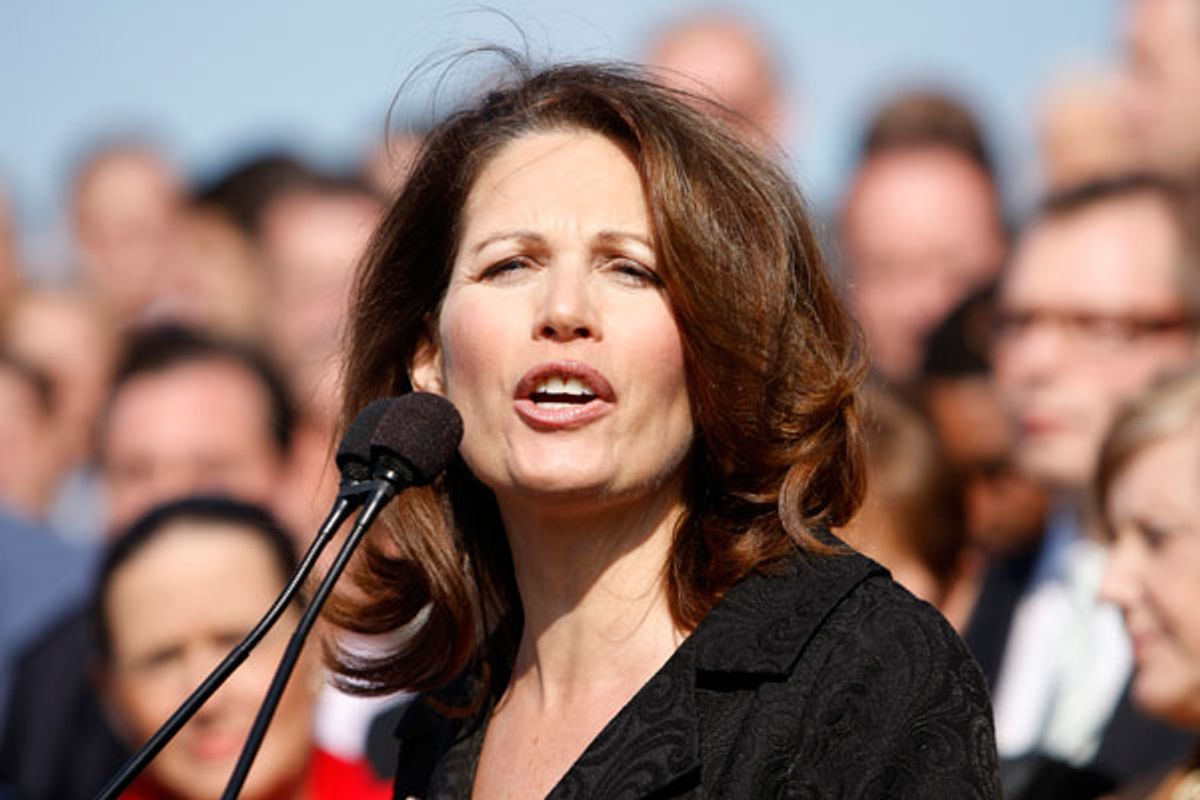 If someone came up to me one day and said, "Alex, I want to run the worst possible Op-Ed I can find. It has to be just totally pointless, misleading, free of actual facts or evidence and based solely on ideology, and it also has to be co-authored by two members of Congress -- who should I get to write it?" I would answer, without hesitating, "Reps. Michele Bachmann, R-Minn., and Steve King, R-Iowa." (Truth be told, I probably wouldn't include the IDs in spoken form, but indulge me on this.)

Then I'd start laughing, and I'd say, "But no one would ever be crass enough, or irresponsible enough, to run that Op-Ed."

And I'd be wrong. Because on Friday, Politico ran an Op-Ed by Bachmann and King about healthcare reform, and it is just as bad as you could expect it to be -- worse, maybe. So there's one very simple question to be asked here: Why the hell would Politico run this? Sure, I understand the traffic argument, but it's nice to think that even in this day and age media outlets have higher standards than traffic alone -- and the piece doesn't meet any of them. It contains not a single original argument, it does nothing to inform Politico's readers, it's often misleading or just plain wrong. It's totally predictable.

Take, for example, a small portion of the Op-Ed in which Bachmann and King argue that the Democrats' healthcare reform bill is unconstitutional because it contains an individual mandate. Their sole evidence for this claim is this quote from a 1994 Congressional Budget Office memorandum:

A mandate requiring all individuals to purchase health insurance would be an unprecedented form of federal action. The government has never required people to buy any good or service as a condition of lawful residence in the United States. An individual mandate would have two features that, in combination, would make it unique. First, it would impose a duty on individuals as members of society. Second, it would require people to purchase a specific service that would be heavily regulated by the federal government.

That's it. Not mentioned? The CBO memo was about how to score an individual mandate -- not whether it would pass constitutional muster. (The CBO doesn't deal with those questions in the first place.)

Then there's this paragraph from the Op-Ed, my personal favorite:

In addition to these legal issues, one group will be hit especially hard – our senior citizens. Always the wisest folks, seniors have been against this bill from the beginning. And for good reason. Obamacare cuts a half-trillion dollars in health care for seniors to lay the foundation for socialized medicine.

Of course, what Bachmann and King didn't mention is that those cuts would come from, yes, a government healthcare program, Medicare, which just happens to be the kind of thing the pair would normally decry as socialistic. And Politico let them get away with that.

That, ultimately, is the real problem here. It's not about the position that Bachmann and King are taking here; obviously, their side deserves as much of a voice in the press as the Democrats do. But that doesn't mean that Op-Eds this shoddy should run, or that media outlets should so completely abdicate their responsibility to ensure that what they publish is factual and informative. Actually adding something to the debate would be nice, too.