If there is a meaningful link between an acting Oscar and divorce, it's the men who should be worried 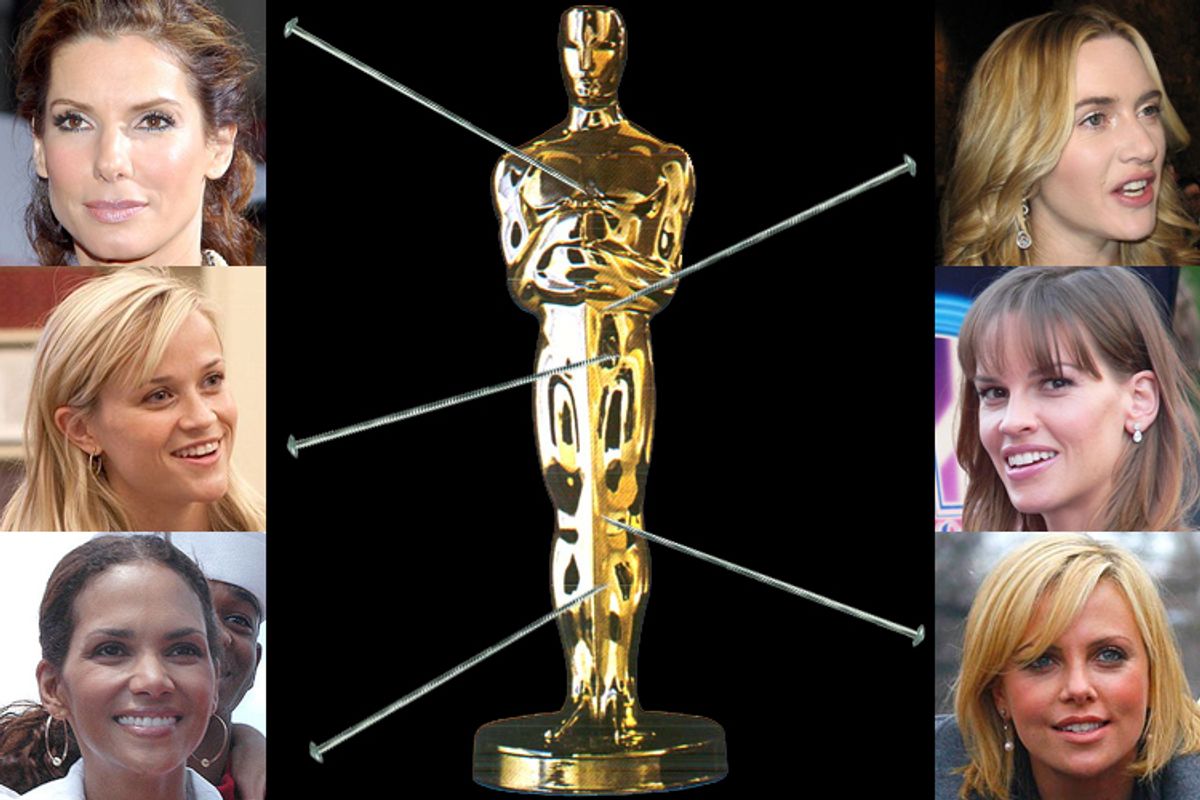 Poor Sandra Bullock and Kate Winslet. Just moments -- or in the latter case, a year -- after winning Best Actress Oscars, they've lost their marriages. Why, it's almost as though there's a curse on the women who take home that statue! Or perhaps it's something a little more down-to-earth; Nicole LaPorte at The Daily Beast wonders, "Is the ultimate honor for women in Hollywood the ultimate castration for men?"

Consider: In addition to Bullock and Winslet, Jane Wyman, Reese Witherspoon, Halle Berry, Hilary Swank and Helen Hunt all got divorced within a couple years of winning Academy Awards -- and Julia Roberts broke up with Benjamin Bratt not long after she did. (Also, although Sarah Jessica Parker and Matthew Broderick have been married for over a decade, and she's never been nominated for an Oscar, LaPorte would like you to know that Broderick was "glumly trailing his wife" on the red carpet this year, as she "was fawned over by the paparazzi and fashion police." Beverly Hills psychiatrist Carole Lieberman agrees that "He was looking miserable the whole time" and her success "may well doom that marriage." So there's that.) Since at least three of these break-ups famously involved the male partners cheating -- and we all know that never happens unless a guy is feeling threatened by a woman's success -- what more evidence do we need that the fundamental problem in each relationship was men suffering "the ultimate castration"? (Aside from, you know, actual castration, which I imagine would feel somewhat more definitive to the man experiencing it.)

But just to be sure, maybe we should compare this data to what we know about Best Actor winners. Writes Jessica Grose at Double X, "The implicit (sexist) idea behind the 'curse' is that men are so uncomfortable with their wives and girlfriends' mega-success, they are driven to cheat or flee." She's referring only to the first "curse" article, by the way; the Daily Beast piece makes that quite explicit. "But if you take one look at the list of best actor nominees and winners, you'll see that their relationship track-records are not much better: 2008 winner Sean Penn's relationship with Robin Wright broke up about seven times; when Russell Crowe won in 2000, he was busy breaking up Meg Ryan's marriage to Dennis Quaid."

Grose also mentions nominees George Clooney, Bill Murray and Mickey Rourke -- but wait, there's still a lot of ground left to cover just among Best Actor winners! For starters, let's not forget Penn's first win, in 2004 -- Wright filed for divorce between the two and after the second. (Contrast this with Hilary Swank, whose marriage to Chad Lowe lasted six years after her first Best Actress Oscar, but who landed on the Daily Beast's "ultimate castration" list because they divorced after her second. And that was the one she thanked him for!) Also, not long after Crowe won, Meg Ryan was busy breaking up with him. William Hurt and Marlee Matlin called it quits somewhere around the time of his win for "Kiss of the Spider Woman," and Dustin Hoffman was both divorced and married in 1980, the same year he won for "Kramer vs. Kramer." Because I have access to a top secret journalistic database known as "Wikipedia," I can tell you that men who were divorced within two years of winning a Best Actor Oscar also include: Clark Gable, Jose Ferrer, Ernest Borgnine, Yul Brynner, Sidney Poitier, Lee Marvin, Rod Steiger, George C. Scott, Art Carney and Robert Duvall. If we expand our parameters to include divorces within six years of an Oscar -- and if Swank counts, I don't see why we shouldn't -- we can throw in Marlon Brando, and I think a couple more I didn't write down. If I had the patience to dig into the romantic histories of Jack Nicholson, Al Pacino, Jamie Foxx, Adrien Brody, etc., the list might grow longer.

That's fifteen confirmed Best Actor winners who were splitsville not too long after taking home their awards -- one of them twice -- versus eight Best Actress winners making LaPorte's case for a curse. That is, in fact, double the break-ups attributed to Best Actress Oscars. So why aren't we more worried about the poor men? Jeff Bridges may have been married to the same woman for over 30 years, but you'll also note that he never won a Best Actor Oscar before this year. Given the bleak history associated with that award, who knows what could happen now? Poor Jeff Bridges.

On the other hand, despite the well-documented presence of a Best Actress curse, Helen Mirren's been with Taylor Hackford since 1986 -- even though she's been nominated twice, won once, and racked up four Emmys along the way; Frances McDormand's been married to the same guy since 1984, Jessica Lange since 1982; Susan Sarandon stayed with Tim Robbins for more than ten years after "Dead Man Walking"; and curse victims Helen Hunt and Julia Roberts have been hitched to new guys for most of the last decade -- all indications that there are, in fact, men who do not view their partners' possession of a gold statuette as symbolic castration! Hell, Marion Cotillard got married just before she won, even, and there's so far no news of a split! So perhaps it's possible that some of these women who won Oscars but lost loves were just, I don't know, with the wrong people at the time? Kind of like all those men presumably were?

I mean, for all I know, maybe every last one of those guys really did flip out at such an unequivocal symbol of their wives' success, scream, "Ow, my balls!" and hit the road. But given the number of Best Actress honorees whose marriages didn't founder immediately after their wins, and the number of much less successful people who end relationships every day, I'd be wary of reading too much into it even then. Especially since such interpretations always seem to be framed as as cautionary tales for high-achieving women, rather than exhortations to men to suck it up and support their partners' ambition. Do you see what happened to Sandy, gals? You've got to ask yourself: Do you want to be at the top of your field, or do you want to be loved? Put your career ahead of your man's ego, and he'll be banging a neo-Nazi tattoo model before you know it. Don't say we didn't warn you. (And psst, Sarah Jessica, we know you've worked really hard to earn so much attention, but oh my god, look behind you!)

When a supposed trend is used to send yet another message that women had best put relationships before careers -- by the way, have you given any thought today to how many eggs you have left, missy? -- I'm always skeptical. But this one is even more ridiculous than most. Grose already made the point a lot more efficiently than I have here: "Needless to say, the notion of a such a curse is a load of bull."

Personal note: This will be my last post as a regular Broadsheet contributor. I'll still be around doing occasional features, but I'm giving up the daily ladyblogging grind for the forseeable future so I'll have more time to work on other projects. I have no doubt that some commenters will be busting out the champagne over that news, but to those of you who have been reading and sending positive feedback over the two years I've been here, thanks so much.