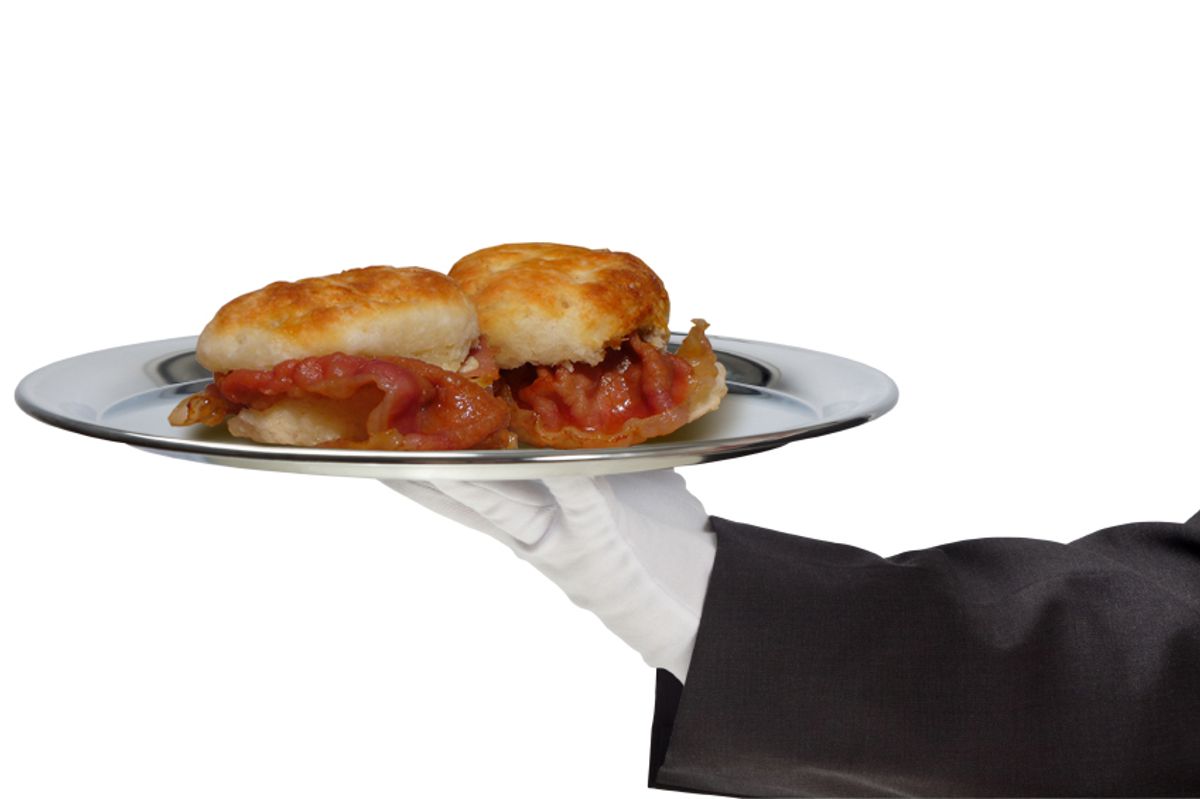 Bacon has been the apple of food nerds' eye for so long that the backlash to it already had a backlash, its fans an impenetrable phalanx of fatty warriors. So what is it about bacon? Is it the salty goodness? The smoke? Or the way lard delivers these flavors in wallops? Either way, bacon is the cook's sledgehammer. But it's time to make way for country ham, the cook's ... er, well, whatever counts as the more elegant version of a sledgehammer.

Like prosciutto -- or the currently more ballyhooed Spanish jamón serrano -- American country ham is the uncooked, salt-cured leg of pig, hung to mature for months and sometimes years. The long curing was originally meant to let the salt work into the meat and preserve it from rot, but for eaters in the age of refrigeration, time-consuming chemistry is where the action's really at. Slowly, enzymes naturally in the meat will break proteins down into our coterie of tasty friends, the amino acids, which give us the satisfying, blooming taste of umami. The fats in the meat slowly change, too, creating beautiful compounds that Harold McGee describes as "characteristic of the aromas of melon, apple, citrus, flowers, freshly cut grass, and butter." Wait, did you catch that? Pork fat that tastes like butter.

But there are two vital distinctions between country ham and its European relatives. One, it's often smoked, giving it different layers of flavor. But even more important is the stark difference in the culture of its fans. Americans have learned to savor European hams, acknowledging them as delicacies -- the finest examples can command well over $100 per pound. But country ham in America doesn't have the same kind of reputation among gourmets, and it remains a deeply democratic food. Allan Benton, who makes one of the true gold-standard country hams, charges $6.50 for a 15-ounce package.

John T. Edge, one of the great food ambassadors of the South, told me that he once took a superb chef to breakfast in the Mississippi Delta. Blown away by his plate of country ham and eggs, the chef asked the waitress where they got it, expecting a romantic story of the artisan ham curer down the way. "The Sysco truck brings it by," she said. Even Waffle House serves it.

Salt-curing meat for preservation is nearly as old as raising animals for food, but American country ham was almost certainly "invented" in Smithfield, Va., where colonials took the pigs they brought from England, fattened them on peanuts slaves brought from Africa, and salted and smoked them according to local Indian methods. According to another of the great Southern food ambassadors, John Egerton, in "1737, William Byrd complained in his Natural History of Virginia that the people of that colony ate so much pork that they were becoming 'extremely hoggish in their temper ... and prone to grunt rather than to speak.'"

Smithfield ham became one of the world's most famous, but it eventually ran with the wrong profit-mongering crowd, and is now made in the typical industrial fashion -- fast, cheap and not nearly exciting enough to be out of control. And, as Peter Kaminsky points out in "Pig Perfect," "the fine old Smithfield Company has the biggest operation in the country of environmentally ruinous hog factories."

Happily, the tradition of country ham spread throughout the South, and is still being made today by a handful of traditional curers, though they are, admittedly, aging. Allan Benton is (deservedly) a darling among hamficionados, but others, including Colonel Newsom's in Kentucky and Burgers' Smokehouse in Missouri, are doing amazing things.

This is where the cultures of high and low cuisine get interesting. Country ham has never left the Southern table, whether soaked overnight and then baked like a fresh ham or sliced, fried and served with biscuits and redeye gravy at breakfast.

But as high-end chefs around America have fallen for it, many have taken to presenting it through the European ham-filter. At the super-sleek Modern in New York, Gabriel Kreuther makes food of uncommon finesse, and uses Allan Benton's ham in his beer-based Alsatian Country Soup, infusing it with deep, funky, smoky complexity. Having grown up near the French-German border and therefore no stranger to amazing pork, chef Kreuther said to me, "I grew up on a farm, and this ham ... it reminded me of the hams that we made when I was growing up. These are the tastes you remember."

Taking cues from the culture of prosciutto, David Chang's ever-fawned-over Momofuku Ssäm Bar opened in 2006 with a country ham service, slicing it paper thin and serving it raw, highlighting the meat's silky texture and subtly sweet complexities. (Remember: pork fat that tastes like butter.) DG Strong, Salon's own Nashville boy and a bit of a country ham himself, was beside himself with the news: "Lawzy! (putting cool compress to forehead) The thin ham thing will certainly get purists' dander up."

But purism or no, high-end chefs are hooked. As Edge said, "We're in the third generation of country ham obsession among chefs. First they fell for it. Then they lionized Allan and the other honest curers of hams. Now they're curing their own. At the City House in Nashville, I saw Tandy Wilson hugging a 27-month-old ham like the proudest kid in the world. Sean Brock and his sous chef at McCrady's in Charleston, S.C., trotted out their ham like it was their child's bride."

Country ham is one of those foods that is endlessly romanticized but, in the wailing ballads of its partisans, seemingly no one ever eats anymore. Like so many traditional, time-intensive crafts, the bells have been tolling for country ham since at least the '70s., when James Villas wrote "Cry, the Beloved Country Ham" for Esquire. It's always about to be ground under for good by modern industry. But the culture of American country ham has fought the good fight and kept it alive for this many centuries, and it might just be bourgeois foodie culture that's going to sweep in and save it for good.

Rejuvenated by the respect of chefs and food media, and inspired by the artisan- and heritage- food movement, master curers like Allan Benton are making their hams even better, experimenting with heritage pigs and better sourcing. As chefs take to curing their own product, some of their acolytes will likely branch off and specialize in the craft. And, given the bacon fad's vampire-like ability to just ... never ... die, it's not hard to guess that Americans will always like themselves a touch of cured pig. "This art's got legs," John T. said to me. "Two hind legs, at least."