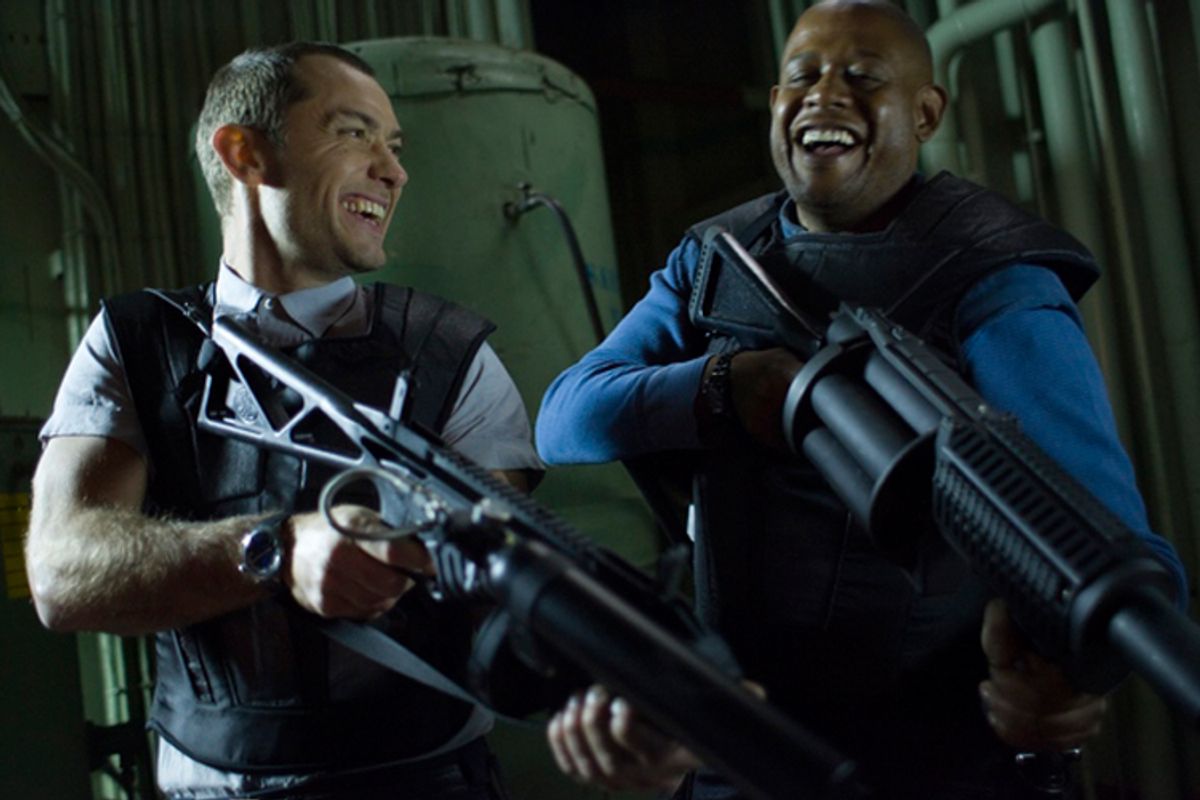 It's sad when a bit of grim futuristic silliness like "Repo Men" falls short on all counts, down to the most basic level of entertainment value. A tawdry little tale set in the world of tomorrow, "Repo Men" -- directed by newcomer Miguel Sapochnik -- details the antics, and the anguish, of Remy (Jude Law), a tattooed, muscle-bound toughie who works for a powerful corporation known ominously as the Union, which sells artificial organs to people who desperately need them. The company charges exorbitant fees for these shiny metal thingamabobs, though its magnanimous figurehead, Frank (Liev Schreiber), reassures clients that they can pay on the installment plan. If they miss too many payments, however, the Union's "skilled and licensed technicians" -- those would include Remy and his partner, Jake (Forest Whitaker) -- will show up to reclaim the unit in question.

Very early in the picture we get a sense of just how skilled and licensed these technicians are: First, Remy locates one of these poor deadbeat schmoes, who is then tasered and sliced open with a gleaming stainless-steel blade. After the company's property is retrieved -- which might take a bit of rooting around in the offender's gooey insides -- it's popped into a baggie, nice as pie, and returned to company headquarters.

Remy knows this isn't a particularly savory way to make a living, and he's trying to find a way to transfer into the much tidier sales division: His wife (Carice van Houten, of Paul Verhoeven's "Black Book," in a small, thankless role) disapproves of his vocation and wants him to set a better example for the couple's young son. But after a series of setbacks, Remy finds himself beholden to the Union himself. He also tumbles into an unlikely partnership with a drug-addled torch singer, Beth (Alice Braga), and the two join forces to fight back against, you know, the man.

The first third or so of "Repo Men" is good-natured, albeit in a sick way, and the movie works so hard at having a style that you might be momentarily distracted from the fact that there's no real story here -- at least not one worth following. The script, by Eric Garcia and Garrett Lerner (adapted from Garcia's novel "The Repossession Mambo"), devolves into a ho-hum narrative of deception and betrayal, with a handy surprise twist at the end. If you squint hard enough, "Repo Men" might be read as a treatise on the ruthlessness of the American healthcare system -- but that's a stretch. Mostly, Sapochnik borrows gimmicky editing techniques from movies like "Trainspotting" (he was, incidentally, a member of that movie's art department) and in general betrays a fanboyish enthusiasm for pictures like "Fight Club" and anything made by Guy Ritchie.

But "Repo Men" isn't even flashy enough to be engaging: Its action sequences are disjointed and dimly lit. There's no passion in them -- they clank but never dazzle. Sapochnik tosses in some camp touches for fun, scoring one of Remy's ruthlessly efficient organ-harvesting forays to Rosemary Clooney's "Sway," for example. But he doesn't have the light touch this kind of grisly-funny violence requires. Everything in "Repo Men" feels belabored and overworked, except, perhaps, the performances. Those have been pretty much tossed off: Law squints, scowls and flexes his exceedingly obvious muscles, but he barely seems connected to the story Sapochnik is trying to tell, much less committed to it. And while Schreiber might have made a devilishly slick bad guy, he has so little to do here that his presence barely registers. "Repo Men" could have been a sick little number laced with disreputable thrills. Instead, it's a self-conscious exercise that keeps advertising its stylishness without actually having any. All of its vital organs are missing in action.