"The Runaways" is the (cherry) bomb

There's plenty of sex, drugs and groupies, but this film is really about the transformative power of rock 'n' roll 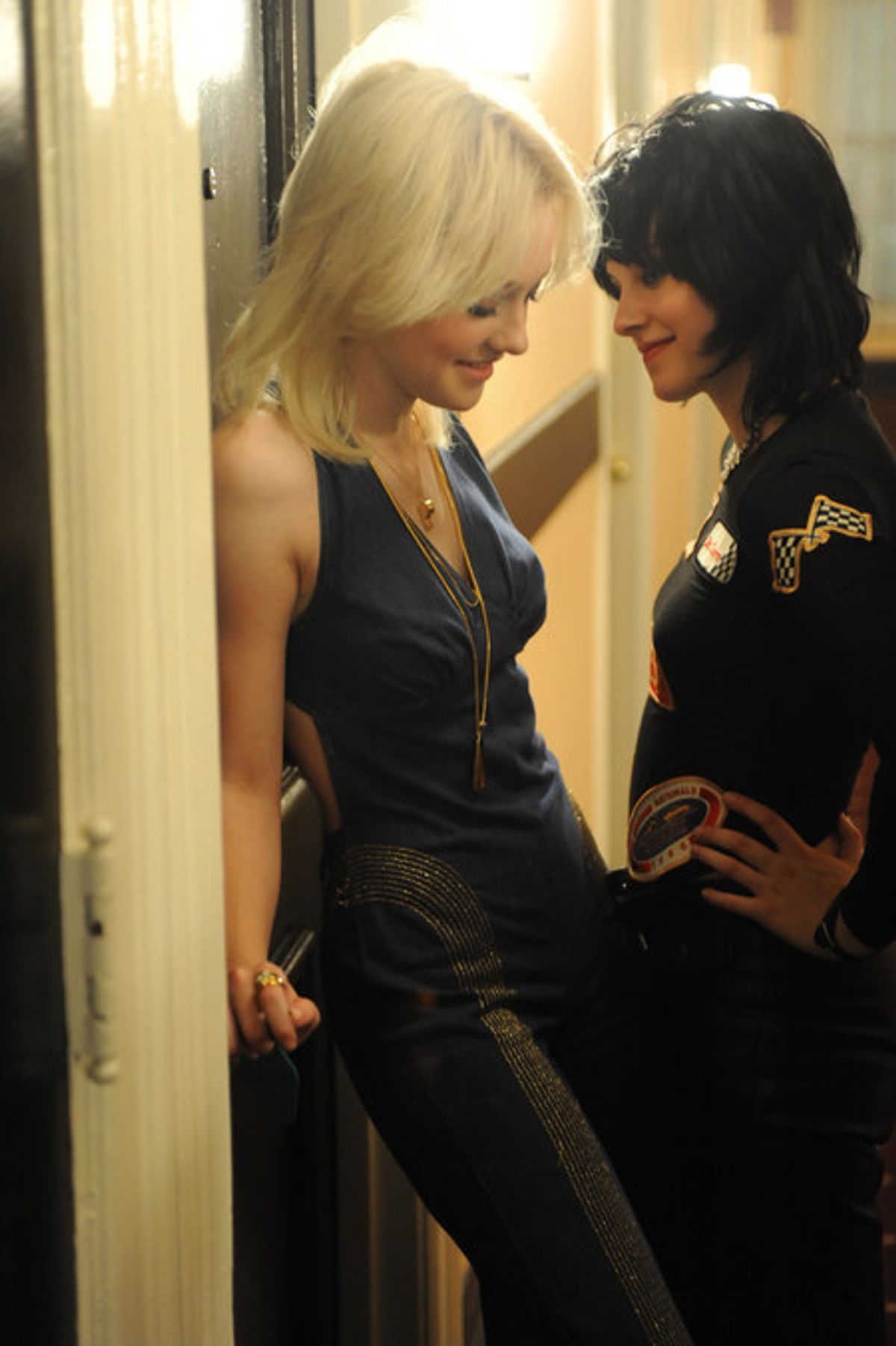 Kristen Stewart and Dakota Fanning star in The Runaways, a Sundance Films production.
--

It was entirely possible to be a teenage girl in 1975 and have no idea who the Runaways were. But even if you'd never heard them, you wouldn't have had any trouble understanding what the Runaways were about: This was a bunch of tough-looking Los Angeles girls who may have been brought together by a sleazy, exploitative impresario named Kim Fowley. Nonetheless, their raggedly sensuous sound was a "no" rather than an acquiescent "yes," the sound of not waiting around for life to happen. They were neither the first nor the last all-girl outfit to refuse to wait around -- the Shangri-Las had gotten there before, and Sleater-Kinney would come later, to name just two. But the Runaways' brash charisma was specific to its era: With their jagged feathered hair and satin jumpsuits, they were girls you wanted to be, less sugar and spice than glamour and sweat.

Floria Sigismondi's "The Runaways" tells a somewhat fictionalized version of the band's story. But even though there's always some rock 'n' roll wanker -- usually a guy -- on hand to volunteer, "I was on the scene, and that's not how it went down," the best rock 'n' roll movies are less about strict authenticity than about capturing a vibe. And "The Runaways" gets the vibe just right, from its opening shot: As the girl who will become the Runaways' lead singer, a superfoxy, Bowie-loving 15-year-old sunshine-blonde named Cherie Currie (Dakota Fanning), sneaks around with her twin sister, Marie (Riley Keough), to meet up with some boys, a drop of her menstrual blood hits the pavement. Shortly thereafter, the girls change from their schoolgirl knee-socks and wedgie sandals into glittery, neck-breaking platform shoes they've "borrowed" from their mom. These are girls who, to borrow a line Paul Westerberg put into a song many years later, are aching to be.

From there, Sigismondi -- who also wrote the screenplay, partly adapted from Currie's candid and entertaining memoir "Neon Angel" -- traces the band's rise and inevitable implosion, including a scene in which the young Joan Jett (Kristen Stewart) totes her guitar to see the school music teacher (played by Robert Romanus, Damone in "Fast Times at Ridgemont High"). After unsuccessfully trying to get her to strum a few chords of "On Top of Old Smokey," he informs her that girls don't play electric guitar, and you can imagine how well that goes over. Jett, obviously, persists, but the members of the band -- including lead guitarist Lita Ford (Scout Taylor-Compton) and Sandy West (Stella Maeve); a fifth character named Robin (Alia Shawkat) was invented for the movie, as a way around legal restrictions surrounding the portrayal of the band's real-life bassist, Jackie Fox -- find their way to one another only with the help of skeezeball genius Fowley. As Michael Shannon plays him -- almost too well -- Fowley is a greasy, lizardlike operator whose single facial expression is a half-sneer, half-scowl. He rules the band by abuse: He calls the girls his "dogs" and sends them out on grueling tours without giving them enough money for food, let alone paying them an actual wage.

But even though Sigismondi doesn't exactly gloss over Fowley's creepitude -- and even though it goes without saying that in real life, the Runaways made far too little money off their brief but blazing run, which included a deal with Mercury Records -- she recognizes that focusing too much on Fowley's exploitation of the girls would turn the movie into his story instead of theirs, focusing on their victimhood rather than their triumph. "The Runaways" is, as you'd expect, a portrait of excess, including lots of sex, drugs and rampaging groupies. But its bigger focus is on the transformative powers of rock 'n' roll. When Fowley strides up to Cherie in a L.A. club and croons, "I like your style," he's picking up on the exact out-of-sight radio signal she's striving to send: Cherie looks great in her satiny outfit and homemade shag haircut, but it's her attitude -- her half-bored, half-expectant pout -- that pushes the look into the stratosphere. Fanning's Cherie has a "don't mess with me" aura, but with a great deal of softness around the edges. Sigismondi is extremely conscious of the line between dewy teenage innocence and the hard-edged, used-up look that can take its place seemingly overnight.

Sigismondi -- who has directed music videos for the White Stripes and Marilyn Manson -- elides some parts of the band's story and compresses others, but she keeps deft control of the picture's overall tone: She doesn't downplay young Cherie's suffering, caused partly by family problems and partly by just growing up too fast, but she doesn't waste time playing junior shrink, either. Benoît Debie's cinematography is L.A.-tawdry when it needs to be and exuberantly glossy when the story calls for it. It is also, in places, beautifully moody and tender, particularly in the affectionate sex scene between Currie and Jett. In her book, Currie writes very simply, and with great protectiveness, about her relationship with Jett: "It ran deep, and at times she was the only one that kept me sane ... How do I explain about a person that was my best friend, someone I would confide in like a sister, someone who to me became a strong, sexual attraction? Well, it's easy ... I can leave it by saying that I had moments with a friend that quake me to this day." In the film, there's no explicit seduction scene, not even a muted one: Sigismondi instead shows Jett and Currie almost literally drifting toward each other, bathed in low light. The sequence is brushed with tenderness and a druggy, blissed-out eroticism. Sigismondi doesn't infantilize her subjects by making it look as if they're merely cuddling, like coy schoolgirls. And the fact that Currie is wearing roller skates makes the moment even more touching: They're one last vestige of little-girl innocence.

My hunch is that a lot of viewers who have watched Fanning grow up in the movies -- many, but probably not all, of them men -- are going to feel uncomfortable seeing her in a role that eroticizes her so frankly. But I think that discomfort speaks to the noisy shout of freedom that the Runaways sounded themselves: At what point is a little girl allowed to be not just a young woman, but her own person? Someday she's going to demand the keys to the car, and not just literally.

That unspoken restlessness is everywhere in "The Runaways," in the way Stewart captures Jett's slightly hunched, long-legged stride, and in the way Fanning's Cherie takes the stage during a show in Japan, wearing a creamy satin bustier and stockings, to sing the band's jailbait-heartbreaker anthem "Cherry Bomb." As the real Cherie Currie did, Fanning (who does her own singing in the film) wraps the microphone cord around her leg, only to unwrap it and whip it around again, a snake-charmer routine that's also an obvious challenge: You think you want this, but can you handle it? That challenge isn't just a sexual come-on: It's a basic question about how to move forward the business of living. Teenagers aren't ready for life, which is exactly why they want to jump in and get on with things. "The Runaways" is all about taking that leap -- and being OK with the bruises after the inevitable fall.

Movies Our Picks The Runaways