As House vote nears, more and more members are announcing their positions -- get the latest news here 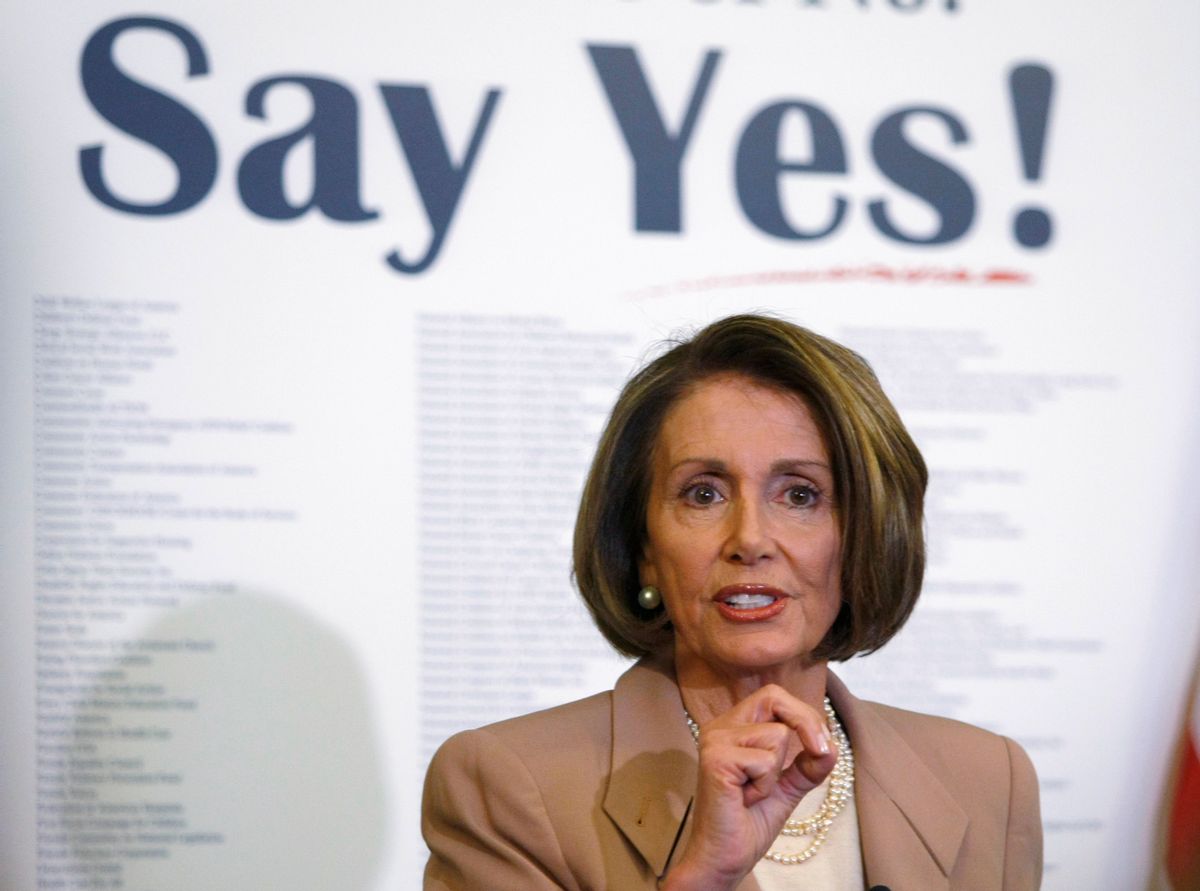 U.S. House Speaker Nancy Pelosi (D-CA) gestures as she addresses her weekly news conference with Capitol Hill reporters in Washington, March 19, 2010. Pelosi on Friday said that when the House of Representatives votes on the healthcare bill, lawmakers will have assurance that the legislation will also be passed by the Senate. REUTERS/Hyungwon Kang (UNITED STATES - Tags: HEALTH POLITICS) (Reuters)
--

Update, 5:20 p.m. EDT Friday: Another big win for the bill's supporters: Rep. Suzanne Kosmas, D-Fla., will vote yes. She was a no last year. That's three no to yes flips so far today.

Update, 5:14 p.m. EDT Friday: Rep. Brad Ellsworth, D-Indiana, is a yes. Ellsworth voted yes last year, too, but he was a supporter of the Stupak Amendment's restrictive language on abortion funding, which isn't in this bill. Add that to the fact that he's currently running to replace Sen. Evan Bayh, who's retiring, and his vote was a real toss-up. Good news for Democrats.

Update, 4:33 p.m. EDT Friday: Rep. Mary Jo Kilroy, D-Ohio, who voted for the House bill but has been publicly undecided this time around, has just announced that she'll be voting yes again.

Earlier this week, demonstrations outside Kilroy's office by people looking to influence her vote were the scene of what became an infamous video of anti-reform protesters berating a man who suffers from Parkinson's Disease.

Update, 4:04 p.m. EDT Friday: Democrats just scored big. Rep. Allen Boyd, D-Fla., has reportedly said he will vote for the bill. This is a pick-up: Boyd was a no last year, and he'd been expected to stay a no.

Update, 2:50 p.m. EDT Friday: Rep. Tom Perriello, D-Va., a yes vote from the fall who'd been wavering, has reportedly decided to support the bill -- though he apparently wants assurances from at least 50 senators that they'll vote for the planned fixes to the Senate bill. Perriello is a freshman in a conservative district, so this vote does make him more vulnerable than he already is -- he's a top Republican target this year -- and he'd been shying away from his party earlier this week, voting for a GOP resolution that would have forbidden the use of a House procedure that might be used to get the full final package approved.

Update, 11:05 a.m. EDT Friday: Rep. John Boccieri, D-Ohio, has announced he'll be voting yes. That's a gain for the Democrats, since he voted against the House's bill.

As we get closer to a vote in the House on healthcare reform -- it could come as early as Sunday -- we're starting to get a clearer picture of how that vote will shake out. Several members who've been on the fence announced their decisions on Thursday, and there are likely to be a few more on Friday.

On Thursday, House Speaker Nancy Pelosi got a couple yes votes in her pocket, thanks to Rep. Bart Gordon, D-Tenn., and Rep. Betsy Markey, D-Colo. But Reps. Michael Arcuri, D-N.Y., and Stephen Lynch, D-Mass. -- both of whom voted yes on the House's bill last year -- wiped out those gains by deciding to vote no this time around. (Even a lobbying effort by President Obama couldn't sway Lynch.)

Meanwhile, on Thursday we learned that a few Democrats who voted in favor of the House bill last year but who had been undecided about this version of the legislation will support it. Those members are Reps. Raul Grijalva, D-Ariz., Luis Gutierrez, D-Ill., Dale Kildee, D-Mich., and Dan Maffei, D-N.Y.

There's already been one announcement on Friday: Rep. Charlie Wilson, D-Ohio, who voted yes last fall, will do the same now. Later in the day, Rep. John Boccieri, D-Ohio, who voted no last year, is slated to announce his position.

To pass the bill, Pelosi needs to cobble together 216 votes, which constitutes a majority in a body that's currently a few members short. At this point, the consensus is basically that she's already gotten more than 200 votes, but after that, there are varying whip counts out there -- some as low as just 200, some as high as 211.