"Breaking Bad," "The Sopranos" and the fall of the Dark Cable Drama 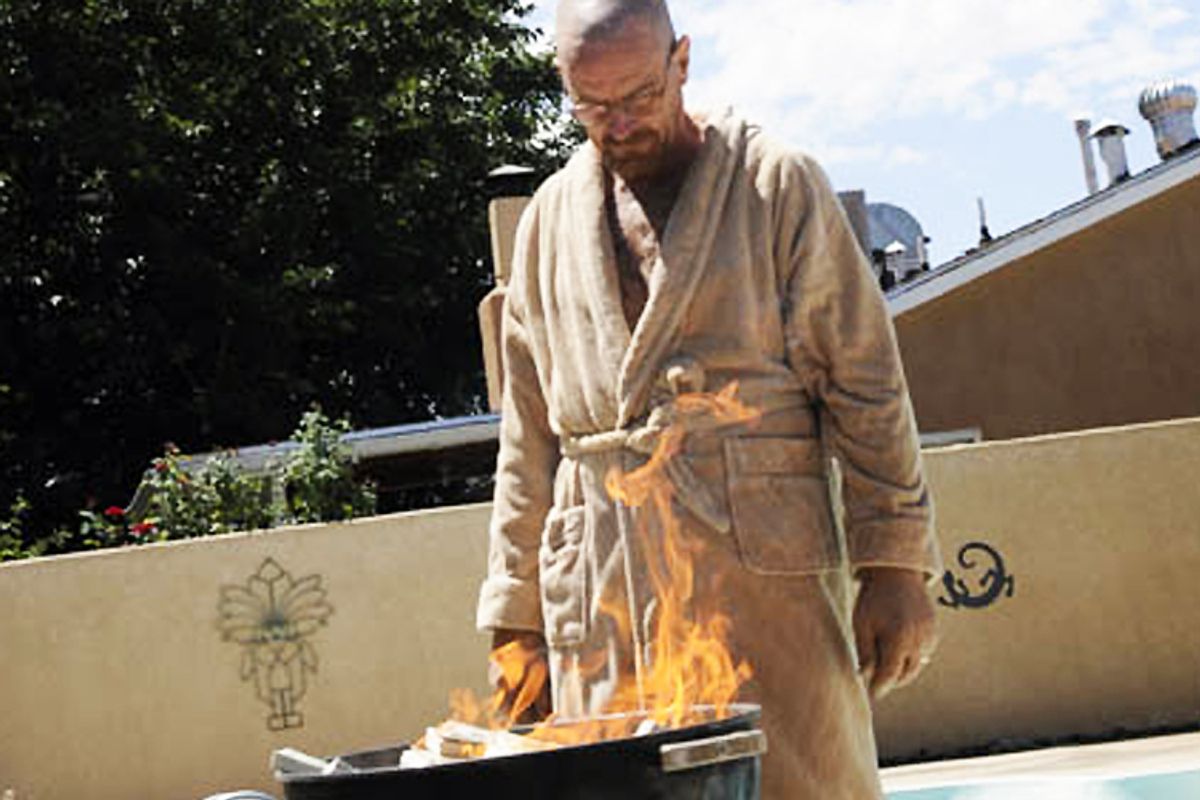 [Spoiler Alert! This article contains spoilers for the 4th season of "Dexter" and the 2nd season of "Sons of Anarchy." Do not read this if you're planning to watch those shows.]

During these dark times, do you prefer TV that plumbs the impoverishment of modern culture for comic relief ("30 Rock") or twists it into a horrific narrative in which every character is doomed to suffer until the final curtain call ("Breaking Bad")? Do you enjoy your gloom and nastiness softened by sly humor and nostalgia ("Mad Men"), or splattered with several gallons of fake blood ("Dexter")? Would you rather watch heartless lady lawyers trying to hurt each other with a subtle game of disconcerting gestures and veiled insults ("Damages"), or witness biker gangs plotting to blow each other's heads off as soon as possible ("Sons of Anarchy")?

Personally, as much as I once craved a dark tragidramedy back when every channel was filthy with hugging and learning, these days I find myself repelled by the unrelenting nihilism of a handful of the darker-than-thou cable shows: "Dexter," "Sons of Anarchy," "Breaking Bad," all well-written, imaginative dramas with wonderful casts that nonetheless present us with the same scenario, week after week: Things go from bad to worse to unthinkable, lead characters flinch and cringe and sweat and sigh deeply and then dig themselves in deeper, and everyone around them suffers.

And that's not to mention the bad guys. Since these shows revolve around likable but deeply flawed, not-very-good guys, the actual bad guys have to be very, very bad, indeed, straining during most of their time on-screen to embody pure evil. In fact, the narrative arc of these shows is propelled mostly by the looming threat of what these Very Bad Guys are capable of: We see them torturing their underlings or their wives or their dogs; we watch as one Very Bad Guy forces a woman to jump off the side of a building to her death, then witness another Very Bad Guy verbally taunting the man whose wife and daughter he stole, hinting that he might molest the girl. Then, as the tension mounts, the Very Bad Guys make spectacular displays of their cruelty: One decapitates his enemy, then uses explosives to blow his head to smithereens when the DEA finds it; another slits the throat of a pretty wife and leaves her baby sitting in a pool of her blood; another pulls a knife on a baby then absconds with him as he cries piteously and his father panics and then crumples into a heap.

See how, in the fallout of these hideous acts, we're meant to gasp and shake our heads at the unthinkable cruelty of it all. I can't wait to see how our Not Very Heroic Hero will respond to this one, we say to ourselves and each other.

Now that the Dark Cable Drama season is just beginning, we can look forward to the same opening scene on each show: Stunned, shaken, guilty, devastated Not-Very-Good Guys sit around, staring into the middle distance, trying to come to terms with the wreckage around them. We can guess that Jax (Charlie Hunnam of "Sons of Anarchy") will be despondent over the loss of his baby son, shaking his head and wondering how he could've let it happen, then snapping unnecessarily at Tara (Maggie Siff). Presumably Dexter (Michael C. Hall) will stumble, aghast and detached, through his new reality in the wake of his wife's murder, struggling to figure out how to take care of his baby and explain to his stepkids the nightmare that their waking lives have just become. Likewise, Walter (Bryan Cranston) spends the third season premiere of "Breaking Bad" (10 p.m. Sunday, March 21, on AMC) reeling from his wife's discovery of his gig cooking meth, not to mention the midair jet collision that he basically caused -- you know, the one that sent bodies flying to the ground in his neighborhood?

Oh, but don't worry, there's comic relief ahead! Walter goes to a high school assembly where the kids are asked to share a few words about the horrible tragedy they endured when the jets crashed over their heads. After listening to the kids say emotionally tone-deaf kid things, Walter takes the microphone and tells everyone to look on the bright side.

"First of all, nobody on the ground was killed and that ... I mean, an incident like this in a popular urban center? I mean, that's got to be a minor miracle. Plus, neither plane was full." This is exactly the sort of thing a scientist who doesn't know himself and walks around in a state of confused alienation might say, of course. This contrast between Walter's circumstances as a meth "manufacturer" and his polite, professional manners, the gap between his lying and ethical lapses as a husband and his insistence that he loves his wife and that they have a great marriage, form the tension that gives "Breaking Bad" its unique spark. But the intelligence and cleverness of this picture doesn't make up for an overriding feeling that creator Vince Gilligan and the other writers are hell-bent on torturing us with maximum bleakness and horror. After each blow to the gut, we wonder, Must I endure this purgatory, just to find out what happens next?

And if we aren't bothered by this running habit of serving up the most spectacularly devastating, soul-crushing moments possible, if we aren't unnerved by the fact that we're meant to chuckle or marvel at clever moments as the human suffering is at an all-time high, if we can still appreciate the artful, sly approaches to people fucking up their lives flatter than hammered shit (as "Deadwood" creator David Milch might put it, always leavening his particular flavor of darkness with so much charm and flair that you found yourself drawn into the picture rather than continually repelled by it), then that must mean that we're just as confused, alienated and detached as Walter himself is.

I'm not suggesting that blood and gore and tragedy and darkness don't form the core of plenty of dramatic works of art. From Hamlet to "The Sopranos" to Charles Dickens' novels, tragicomic explorations of the human condition have always helped us to navigate our own tragicomic lives. Nonetheless, there's something different about the Dark Cable Drama: Maybe it boils down to shocking CGI effects, or the supreme alienation of its lead characters, or the ways that the misery sustains itself over the course of several long, drawn-out seasons, or those peculiar strains of ironic distance and macho posturing, which insist that, despite making one messed-up choice after another, despite actively cobbling out his hellish fate, our distinctly UnHeroic Hero is a hero, just the same.

And in the context of a culture that loves its horror movies and savors two hours of creepiness and gore and pained screams, maybe the Dark Cable Drama can be viewed as a relatively thoughtful and richly layered and suspenseful exploration of the darkness that lives in human souls.

Nonetheless, there's an enormous difference between, say, "The Sopranos," and "Breaking Bad" or "Dexter." Even though all of the Unheroic Heroes of these shows, just like Tony Soprano, are constantly struggling with their humanity, always trying to find some way around their hideous responsibilities, always trying to emancipate themselves from the ignorance and cruelty of their worlds, the grim core of the Dark Cable Drama is pure agony, where escape is futile and hope is a mirage. There is no wider perspective offered, there are no insights into regular, everyday life reflected in these depraved scenes, there's nothing to learn about hubris or ignorance or greed here.

Or, as Jesse (Aaron Paul) tells Walter in the third season premiere of "Breaking Bad," "You either run from things, or you face them, Mr. White. I learned that in rehab. It’s all about accepting who you really are. I accept who I am."

"And who are you?" Walter asks him.

This is the heart of the Dark Cable Drama, the rotten core of its swooning love affair with horrific murders and big flashy plane crashes and splintered marriages and traumatized children and a cascade of terrible mistakes piled on top of more mistakes: In the end, no matter what glimmers of humanity or sweetness you might encounter, you're a fool to do more than surrender yourself to your own worst instincts.

No one is aching for another Big Moral Lesson, but the slightest hint of a wider perspective beyond bewilderment and learned helplessness would go a long way. Simply training a camera on heartbreak and gore and destruction and never pulling back, except to tease out the inept and uncomfortable and utterly insufficient ways that human beings handle despair? As Livia Soprano would say, "It's all a big nothing."