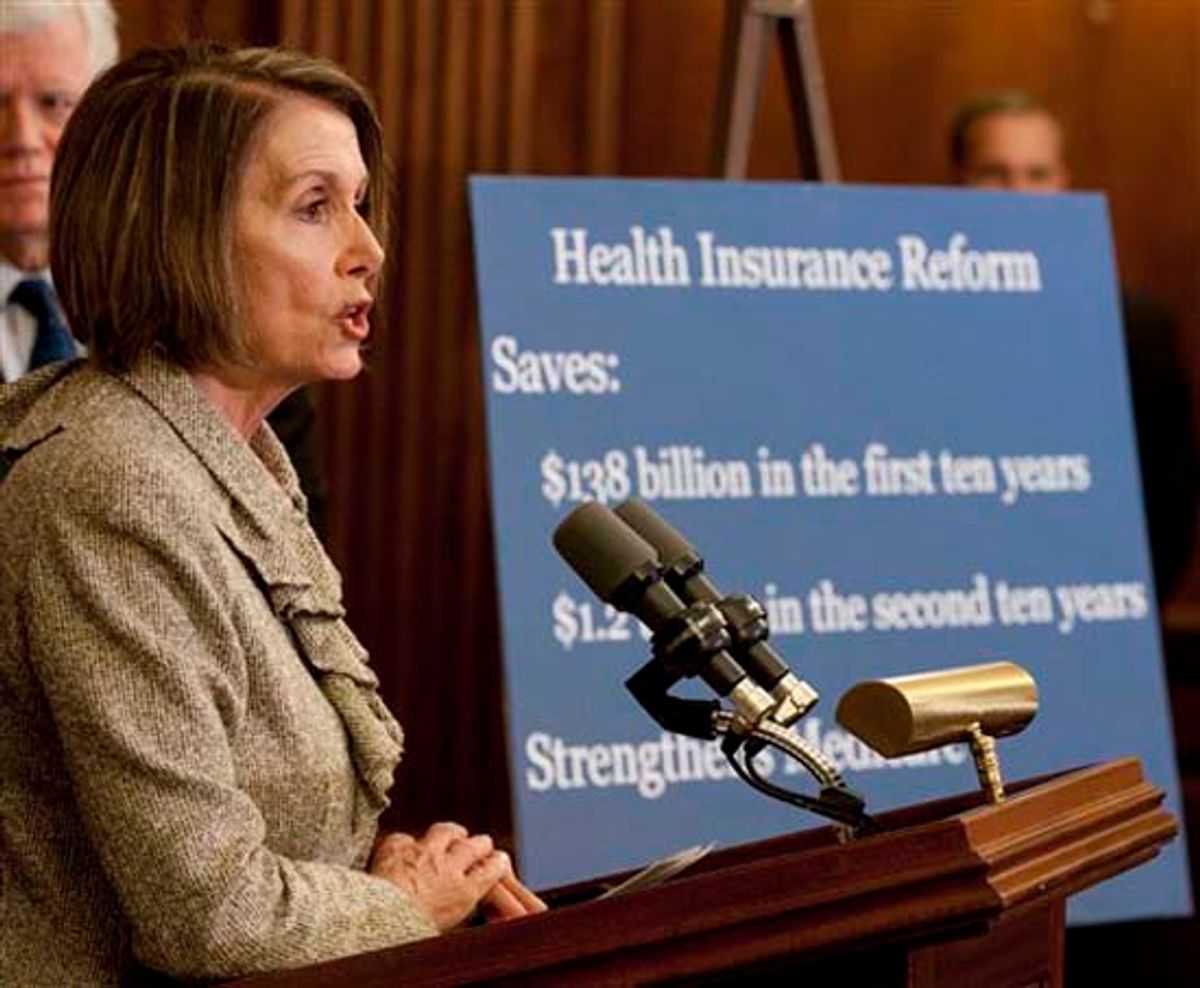 Ever since Thomas Frank published his book "What's the Matter With Kansas?" Democrats have sought a political strategy to match the GOP's. The healthcare bill proves they've found one.

Whereas Frank highlighted Republicans' sleight-of-hand success portraying millionaire tax cuts as gifts to the working class, Democrats are now preposterously selling giveaways to insurance and pharmaceutical executives as a middle-class agenda. Same formula, same fat-cat beneficiaries, same bleating sheeple herded to the slaughterhouse. The only difference is the Rube Goldberg contraption that Democrats are using to tend the flock.

First, their leaders campaign on pledges to create a government insurer (a "public option") that will compete with private health corporations. Once elected, though, Democrats propose simply subsidizing those corporations, which are (not coincidentally) filling Democratic coffers. Justifying the reversal, Democrats claim the subsidies will at least help some citizens try to afford the private insurance they'll be forced to buy -- all while insisting Congress suddenly lacks the votes for a public option.

Despite lawmakers' refusal to hold votes verifying that assertion, liberal groups obediently follow orders to back the bill, their obsequious leaders fearing scorn from Democratic insiders and moneymen. Specifically, MoveOn, unions and "progressive" nonprofits threaten retribution against lawmakers who consider voting against the bill because it doesn't include a public option. The threats fly even though these congresspeople would be respecting their previous public-option ultimatums -- ultimatums originally supported by many of the same groups now demanding retreat.

Soon it's on to false choices. Democrats tell their base that any bill is better than no bill, even one making things worse, and that if this particular legislation doesn't pass, Republicans will win the upcoming election -- as if signing a blank check to insurance and drug companies couldn't seal that fate. They tell everyone else that "realistically" this is the "last chance" for reform, expecting We the Sheeple to forget that those spewing the do-or-die warnings control the legislative calendar and could immediately try again.

Predictably, the fear-mongering prompts left-leaning establishment pundits to bless the bill, giving Democratic activists concise-yet-mindless conversation-enders for why everyone should shut up and fall in line ("Krugman supports it!"). Such bumper-sticker mottos are then demagogued by Democratic media bobbleheads and their sycophants, who dishonestly imply that the bill's progressive opponents 1) secretly aim to aid the far right and/or 2) actually hope more Americans die for lack of healthcare. In the process, the legislation's sellouts are lambasted as the exclusive fault of Republicans, not Democrats and their congressional majorities.

Earth sufficiently scorched, President Obama then barnstorms the country, calling the bill a victory for "ordinary working folks" over the same corporations he is privately promising to enrich. The insurance industry, of course, airs token ads to buttress Obama's "victory" charade -- at the same time its lobbyists are, according to Politico, celebrating with chants of "We win!"

By design, pro-public-option outfits like Firedoglake and the Progressive Change Campaign Committee end up depicted as voices of the minority, even as they champion an initiative that polls show the majority of voters support. Meanwhile, telling questions hang: If this represents victory over special interests, why is Politico reporting that "drug industry lobbyists have huddled with Democratic staffers" to help pass the bill? How is the legislation a first step to reform, as proponents argue, if it financially and politically strengthens insurance and drug companies opposing true change? And what prevents those companies from continuing to increase prices?

These queries go unaddressed -- and often unasked. Why? Because their answers threaten to expose the robbery in progress, circumvent the "What's the Matter With Kansas?" contemplation and raise the most uncomfortable question of all:

What's the matter with Democrats?