It started as a dumpling party. But ribs always steal the show 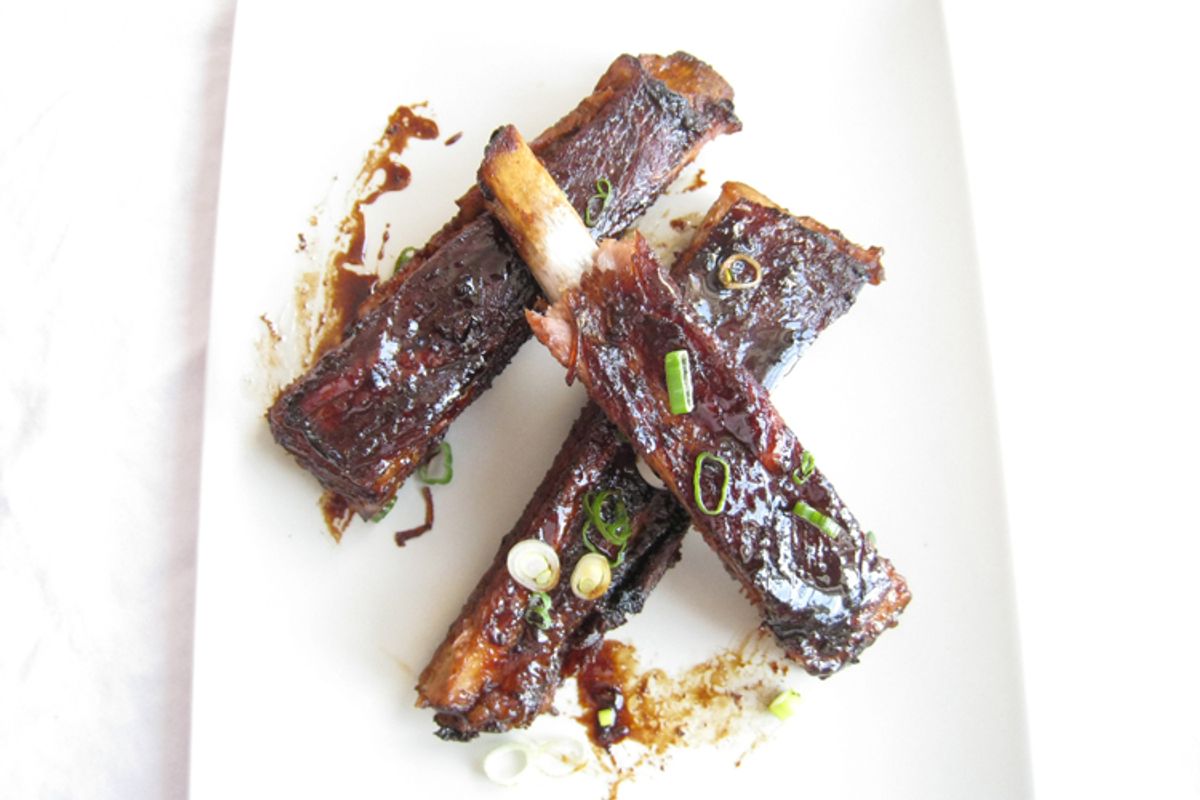 For the ultimate in panicky cat-herding experiences, try this: invite a bunch of friends over for a dinner party and teach them to make your mother's Taiwanese dumplings. And then wait, two-thirds starving, for even a handful of passable dumplings to emerge. Feel that slow, sinking feeling as you realize your guests have been there for three hours and dinner is looking a long, floury way away. For added effect, make sure that your mother's dumplings happen to be your absolute favorite thing in the world, less a favorite food than thousand-mile stand-in for a nuzzle in her bosom.

I looked up from the wrapper-rolling table, around my friend Winnie Yang's kitchen, hearing the wine glasses clinking and the teeniest sound of Winnie's teeth gnashing with every busted dumpling. I was horrified. I brought this upon her, cajoling her to teach me her mom's food, and inviting along some fat-fingered friends for the ride. Luckily, she prepared for this contingency. She had Mom's ribs in the oven. And eventually, when there were finally enough dumplings to anchor the table, we all sat around our proud, slightly lopsided handiwork ... and immediately devoured the ribs. Soy sauce black and sticky with honey, they were so good, so simple, so stridently home-style, they announced themselves as the kind of food you want to come home to every night.

So the dumpling how-to I planned for today will have to wait until I figure out how not to rip them apart while trying to put them together. But luckily I, too, planned for this contingency. I cadged Winnie's rib recipe.

First, a few words on buying ribs and marinade ingredients

The timing guidelines (and remember, they're always just guidelines -- you gotta get acquainted with your meat!) here are for baby back ribs; spare ribs are a little bit of a different game. (Depending on your philosophy, you can cook them longer to get them tender, or blast them quickly in a broiler to accent their pleasant chewiness and fattiness.)

So what's the difference between the two? Baby back ribs come from -- shocker! -- the back of the pig, that is, near the spine and the top of the animal. Ever have a rib chop? Those are the back ribs. They're attached to the loin meat, which is lovely stuff, but can be somewhat lean, more meaty and less fatty. Spare ribs are those same bones, but cut from underneath, near the belly. That means they're primarily belly meat; that means they are fat-tastic. (The belly is where bacon comes from.) For a good discussion of pork cuts, check this out.

By the way, if you're getting your ribs shrink-wrapped from a grocery store, check the label to see if it says something about containing up to X percent super-duper flavor solution or something along those lines. I'm a big fan of brining pork for flavor and juiciness, which is, in fact, a super-duper flavor solution that the meat absorbs, but these industrial brines always skeeve me out a little - for me, the meat becomes unnaturally tender and tastes weirdly tinny and artificial.

Finally, since the recipe is so simple, the quality of your marinade ingredients can make a dramatic difference -- try to use nice honey, and really try to get some good soy sauce (ditch that La Choy stuff!). Even really good soy sauce only costs a little more per use than the cheap stuff, and if you are near an Asian market, ask around for the best stuff. Really good soy sauce tends to be darker, a bit thicker than water, but not necessarily saltier. Its true magic is in the complex, fermenty, umami flavors. Japanese tamari-style soy sauce tends to be nice, and reasonably available. Kikkoman and Yamasa brands are nice.

Serves ... well, only you know in your heart how many ribs you can eat; this recipe easily multiplies