Too much tea party racism

As protesters call Dem leaders "nigger" and "faggot," it's time for Republicans to denounce them. Updated 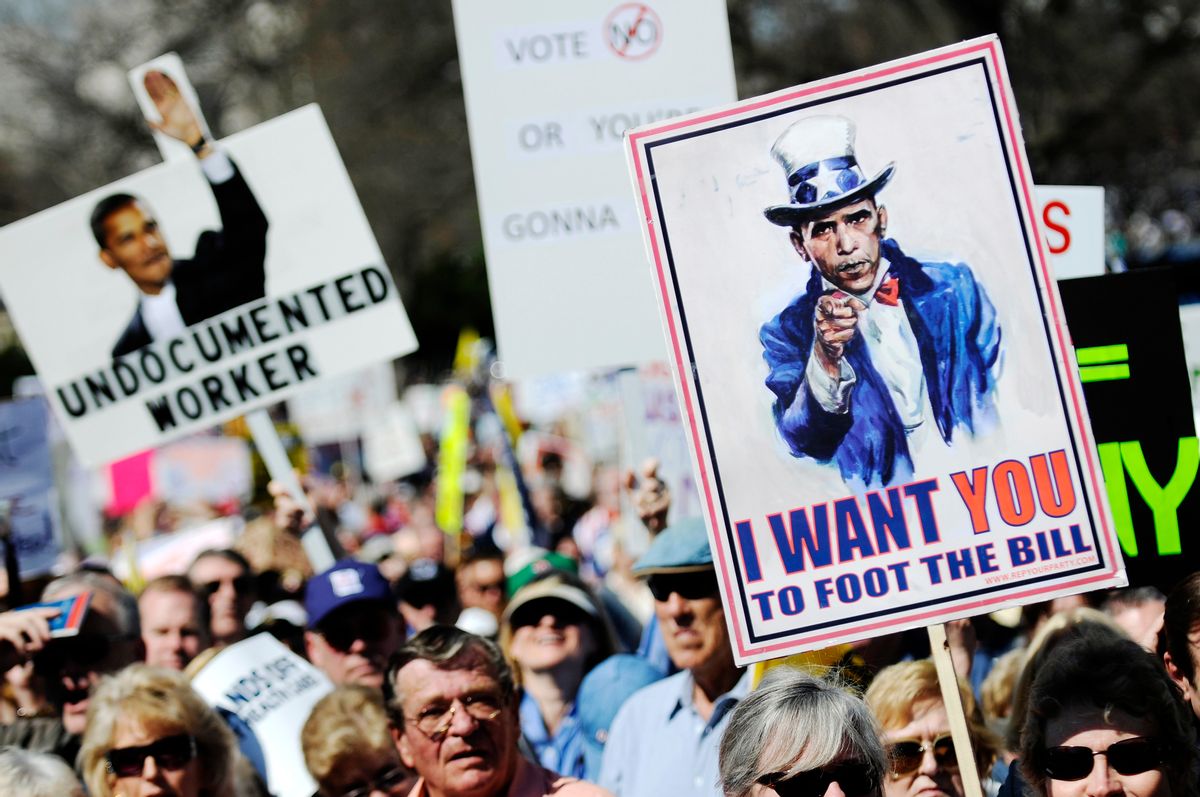 When the tea party movement began last year I saw it as right-wing reaction, but given the economic turmoil across the country, I tried to understand it. Maybe there was populism within the movement that the left needed to recognize. I attended a local tea party last April 15, tax day, and while I didn't find folks whose minds seemed mutable by liberal populism, at least it seemed possible to have a conversation. I wrote about a former banker and a Democrat who made common cause with some of the protesters around the bank bailout and Goldman Sachs's overall influence on government. She had some good conversations. I saw closed minds, but I didn't see violence or overt racism. Of course I was in San Francisco, so it probably wasn't representative of the tea party movement, but I still think the effort to understand the economic anxiety that's part of what's motivating the tea partiers was worth my time.

A year later, though, it's worth more of my time to say what many resist: The tea party movement is disturbingly racist and reactionary, from its roots to its highest branches. On Saturday, as a small group of protesters jammed the Capitol and the streets around it, the movement's origins in white resistance to the Civil Rights Movement was impossible to ignore. Here's only what the mainstream media is reporting, ignoring what I'm seeing on Twitter and left wing blogs:

On Thursday MSNBC's "Hardball" host Chris Matthews grilled tea party Astroturf leader Tim Phillips of Americans for Prosperity about supporters who taunted a man with Parkinson's disease at a tea party gathering in Ohio last week. Phillips insisted the bullies just didn't represent the tea party movement. But such demurrals don't cut it any more. At the Nashville tea party gathering last month, a proponent of the kinder, gentler tea party movement, Judson Phillips, tried to distance himself from crazed and racist elements – but later endorsed racist speaker Tom Tancredo even after he told the convention: "People who could not even spell the word 'vote', or say it in English, put a committed socialist ideologue in the White House. His name is Barack Hussein Obama." Tancredo blamed Obama's election on the fact that "we do not have a civics, literacy test before people can vote in this country." He got some of the loudest cheers of the weekend.

So I'm having a hard time tonight trying to believe almost uniformly white tea partiers are anything other than a racist, right-wing reaction to the election of an African American president who brings with him feminists and gays (even if he doesn't do as much for them as they would ideally like). I'm having a hard time seeing the tea partiers as anything other than the spawn of George Wallace racism – the movement Pat Buchanan bragged to me that Richard Nixon made his own. Of course, in that same "Hardball" segment, Buchanan denounced me for condescending to and "demonizing" the tea partiers. I still find that rich: I grew up in lower middle class Long Island, with a first-generation Irish father, going to public schools and universities, while the wealthy Buchanan grew up in Washington D.C. with professionals as parents and attended Georgetown University. How is he the supposed working class troubadour while I'm somehow emblematic of the pointy-headed liberal elite?

Democrats are lame about fighting stupid class-based slurs like that, which is part of why this health care fight has dragged on and become so bitter. But I think a lot of Democrats were horrified by the ugliness they saw today, and I'm hoping that helps pass health care reform on Sunday.

I'm going to close with statements issued by the offices of Emanuel Cleaver and House Majority Leader Steny Hoyer (no firebrand lefty, by the way), which I found on the New York Times: Cleaver (who didn't press charges against the loser who spit at him) is first:

For many of the members of the CBC, like John Lewis and Emanuel Cleaver who worked in the civil rights movement, and for Mr. Frank who has struggled in the cause of equality, this is not the first time they have been spit on during turbulent times.

This is not the first time the Congressman has been called the “n” word and certainly not the worst assault he has endured in his years fighting for equal rights for all Americans. That being said, he is disappointed that in the 21st century our national discourse has devolved to the point of name calling and spitting. He looks forward to taking a historic vote on health care reform legislation tomorrow, for the residents of the Fifth District of Missouri and for all Americans. He believes deeply that tomorrow’s vote is, in fact, a vote for equality and to secure health care as a right for all. Our nation has a history of struggling each time we expand rights. Today’s protests are no different, but the Congressman believes this is worth fighting for.

Today’s protests against health insurance reform saw a rash of despicable, inflammatory behavior, much of it directed at minority Members of Congress. According to reports, anti-reform protestors spat on Rep. Emmanuel Cleaver, yelled a sexual slur at Rep. Barney Frank, and addressed my dear friend, Rep. John Lewis, with a racial slur that he has sadly heard far too many times. On the one hand, I am saddened that America’s debate on health care — which could have been a national conversation of substance and respect — has degenerated to the point of such anger and incivility. But on the other, I know that every step toward a more just America has aroused similar hate in its own time; and I know that John Lewis, a hero of the civil rights movement, has learned to wear the worst slurs as a badge of honor.

America always has room for open and spirited debate, and the hateful actions of some should not cast doubt on the good motives of the majority, on both sides of this argument. But Members of Congress and opinion leaders ought to come to terms with their responsibility for inciting the tone and actions we saw today. A debate that began with false fears of forced euthanasia has ended in a truly ugly scene. It is incumbent on all of us to do better next time.

Asked about the racist and homophobic shouts from the crowd at Democrats Saturday, he was pretty blunt. "I crossed the bridge in Selma with [civil rights leader and Democratic Rep.] John Lewis a couple weeks ago," Pence said. "I denounce, in the strongest possible terms, the kind of language and statements that have been reported." But he said the GOP wasn't responsible for inciting the anti-government movement to the frenzy that it's reached. "I think we've reached a tipping point here," he said. "I think the American people are rising up with one voice and saying, 'Enough is enough.'"

It's nice that Pence isn't endorsing the shouts of "nigger" John Lewis heard Saturday. But he continues to blame the anti-government frenzy on Obama and the Democrats and ignore the role of GOP racism. Shortly after Pence's remarks, his colleague Geoff Davis (great name!) of Kentucky actually hung a tea partier's "Don't Tread On Me" sign over the Capitol Balcony. You'll all remember Davis as the guy who referred to Obama as "that boy." On Sunday Davis insisted the tea partiers are merely expressing "their fear of their own government" (now that it's led by "that boy"?) No racism there, none at all.

Oh, and Barney Frank was called a "faggot" again. Frank later demanded that his GOP colleagues stop applauding the tea partiers who were heckling House Democrats. "That's why you get this kind of virulence and hatred," Frank said, according to the Huffington Post. If Pence and other GOP leaders wanted to stop the hate, they'd stop encouraging the vicious rowdies who are behind it.