As Lady Gaga puts glitter back in the spotlight, a much-maligned genre gets another look 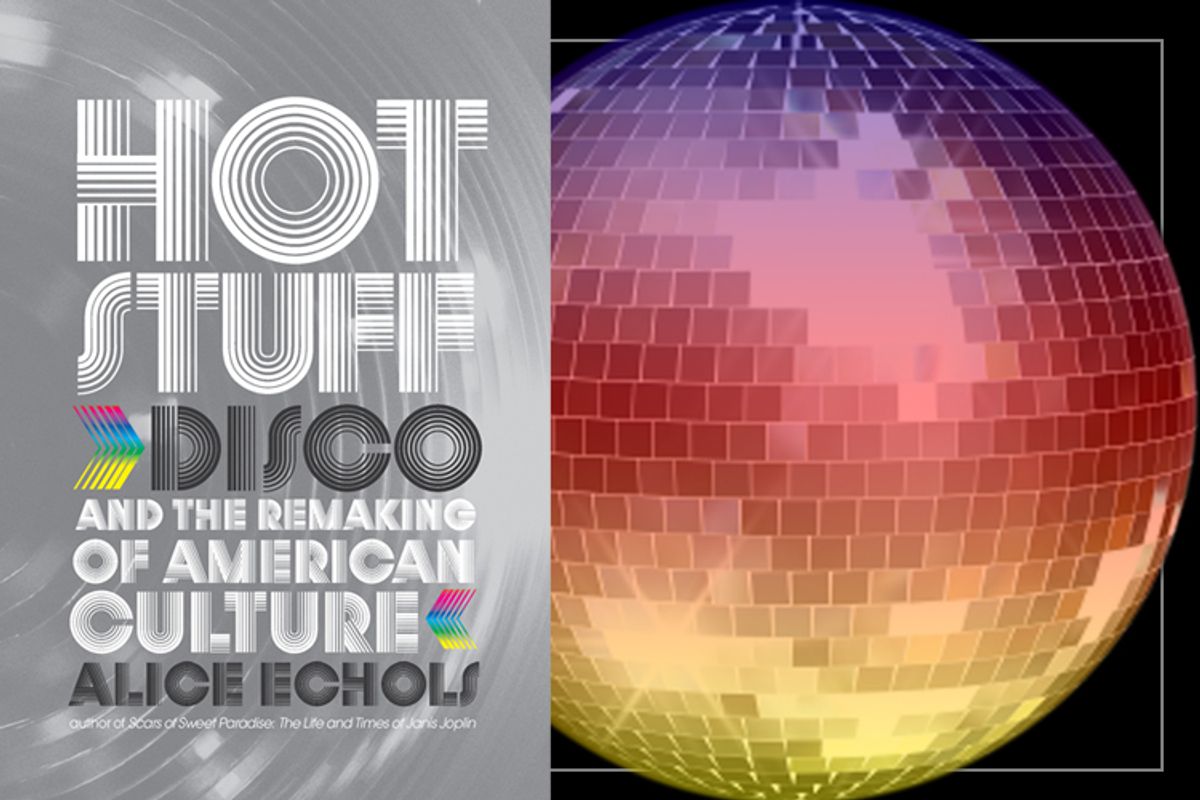 If you've been near a computer screen or a teenager over the past week, you've probably seen Lady Gaga's new "Telephone" music video. In the epic 10-minute clip, which has already garnered an extraordinary 21 million YouTube views, the pop singer is dragged into women's prison dressed as Klaus Nomi, kisses a woman while wearing cigarette sunglasses, and, after going on the road, commits mass murder while wearing a hat made of telephone dials.

Yes, Lady Gaga is gender-bending, joyously synthetic and unabashedly fun, and after a decade in which hip-hop dominated pop music, she's bringing glitter back into the American mainstream. As Alice Echols argues in her new book, "Hot Stuff: Disco and the Remaking of American Culture," she also signals a resurgence of disco -- and that the dance music trend that brought us Donna Summer's "Love to Love You Baby" and the Village People's "YMCA" is being repackaged for a new generation.

Echols, a former disco DJ and professor of American studies and history at Rutgers University, also believes that disco, which emerged from Motown and funk in the late '60s, deserves far more respect than it's received. As Echols explains in her readable and thoroughly entertaining book, disco played a crucial role in giving voice to female desire in American pop music, racially integrating the American dance floor and defining gay culture.

Salon spoke to Echols over the phone about Lady Gaga's outfits, how dancing caused the Stonewall Riots, and why the '60s are overrated.

Why do you think Lady Gaga signals a resurgence of disco?

I take a very expansive definition of disco. People who love rock music call everything from heavy metal to Little Richard rock. It's just assumed that it's a genre that can take in a lot of different styles. One of the things that annoys me about so much writing on disco is this idea that disco can only be talked about as the classic disco sound that lasted a few short years. Lady Gaga is disco to my ears. She's so great and conceptual, like disco David Bowie with a vagina. Plasticity is understood as a cool thing by Lady Gaga, and I think disco is the taproot source for this.

Why do you think disco is making a comeback?

The disco wars are long over for young people. They don't remember it. This music probably doesn't even sound like disco to them. One of the innovations of the '80s after the crash was that you don't call it disco, you call it dance or club music.

It's a much more queer-friendly scene these days. With Obama we haven't moved into a post-racial period, but it's possible that there's less racial characterization and less pressure on black musicians to conform to white expectations of what their music sounds like. As [New Yorker writer] Sasha Frere-Jones wrote, rap has made the turn to dance music in a very obvious way.

You argue that the '70s, which have been maligned as the "Me Decade," got an unfair shake compared to the '60s, which was supposedly this time of transformation and great art. What are people missing about the '70s?

Honestly, if you were to look unflinchingly at some of those rock performances of the '60s today, like Joe Cocker at Woodstock, they're really kind of cringe-making. Obviously, there was great music at that moment, but the '60s have gotten the lion's share of attention both in popular and in scholarly histories, and it's been so outsized that it's made it hard for scholars to see what was unique about the decades that bookended it.

People have this idea that in the '60s everything happened at once, but it depends on the group we're talking about. There was change happening for gay people, but they were still being entrapped by undercover detectives in '69 and '70 and beyond that. Gay bars were places of surveillance and harassment and danger. Feminism doesn't hit its stride until the '70s, and in terms of the racial, ethnic mix, disco made nightlife much less segregated. It was really unprecedented.

You also argue that dancing was instrumental in causing the Stonewall Riots, and touching off the gay rights movement. They weren't playing disco at the Stonewall Inn, obviously, but it had a similar vibe to the discos that emerged shortly thereafter. Can you explain that?

In some ways, it's not surprising that the Stonewall Inn became the birthplace of what many people consider the modern gay liberation movement: It was a dancing bar. The Stonewall had two dance floors, and it was unusual because most bars in New York City did not allow gay men to dance. The one in the back was often filled with black men and Latinos, and the jukebox was soul. There was a lot of getting down on that dance floor, and that led to a kind of sexual expressiveness.

There's this great quote I have in the book, that at other bars you could only get into the longing for a particular person -- and think, "Oh, he's cute" -- but you couldn't do anything about it. At the Stonewall, the dancing forced a kind of physical intimacy and, I think, gave the men there a sense of wanting more and yearning for more, which then got expressed in the Stonewall Riots.

It's very telling that when the Gay Liberation Front and the Gay Activist Alliance started up in New York, one of their key activities was to organize dances where many of the movers and shakers of the disco world were first exposed to disco. I think it's very hard to disaggregate dancing from protest. Dancing is a protest especially from men who were surveilled and harassed. That's one of the reason why disco featured music that didn't stop. You didn't want it to stop, because that in itself was a kind of rebellion.

One of the most interesting things that I took from the book is the extent to which disco is responsible for creating much of what's now considered mainstream gay culture -- the emphasis on muscular bodies, for example.

Once gay bars became decriminalized, the mafia pulled back somewhat and you saw these different venues cropping up, like private clubs. Dancing became a part of what Richard Goldstein calls the "psychic intifada." The music was so damn loud that the reticence and inhibition that characterized the gay piano bar could no longer be had. You had to dispense with the chitchat, which led to greater sexual explicitness.

Most discotheques had sweat-box conditions, which encouraged men to take off their shirts and led gay men to be the pioneers of the Nautilus and develop these "dancing machine" bodies. It really permitted gay men to become sexually legible. It allowed them to reject the idea of gay masculinity as automatically failed, and led to the development of gay macho. As the novelist Edmund White said, it enabled gay men to feel like they -- not straight, rough trade -- were men they'd been looking for.

Disco has been criticized for being anti-feminist and reducing female singers to "kewpie dolls" -- but you think that it was actually empowering to women. Why?

Disco is women's music, for sure. Disco foregrounded female pleasure in a way that most rock 'n' roll didn't. There was a fear that disco was a kind of Cosmo version of feminism, but for many of us it was very liberating to hear the women of Labelle sing "Lady Marmalade" -- "Voulez-vous coucher avec moi?" -- or Nona Hendryx writing incredible songs about female desire.

Rock music just didn't afford many opportunities for that, except for Patti Smith and a few stray voices. I definitely think there are criticisms to be made of the way women were treated in disco. Over time there came to be this kind of disjuncture between disco and funk and increasingly as disco became popular, record companies and managers pushed women [who made funk music] into disco, and disco became more feminized. As it became more feminized it became seen as more pop-ish, less legitimate.

Disco continued to be ridiculed and reviled by rock fans long after it disappeared from mainstream culture. Why has anti-disco sentiment lasted so long?

Rock music imported a lot of the ideas of musical authenticity from folk music, who really believed music should be natural and spontaneous and raw and filled with sincerity, and should not be commercial. If this is your standard, then disco flies in the face of that. It embraces artifice and the synthetic. People who love disco aren't going to say, "Oh man, can you believe the way Donna Summer sold out?"

I think there were different reasons why people hated disco, and it depended on the context. Because of disco's success and popularity, a lot of the local rock clubs closed down and became discos, which annoyed many people; disco appealed to a different constituency than the Rolling Stone crowd: women, gays and blacks. One of the reasons many men didn't like it, especially white guys, was that disco involved dancing.

And among some working-class whites in Detroit, for example, which was one of the epicenters of anti-disco, there was this idea of, "Hey, what happened to us and our music? It's being taken over by a bunch of black people!" Not everybody who hated disco was racist, obviously, but I think racism did inform the feelings of some people. There were white guys dressing up like the KKK at anti-disco rallies. There was also homophobia, and disco was the soundtrack of feminism, which was upsetting many men's lives.

There are so many, but one of my very favorites is Diana Ross' "Love Hangover." I love it because it starts out slow so it's really challenging for the DJ. It's this incredibly lush-sounding song. She sounds so uninhibited for Diana Ross and so happy! There's just a kind of pleasure, and joy and infectiousness to that song and you really get the sense that she's somebody who's just had sex. I still remember so clearly dancing to it.