Boehner and friends parrot the same alarmism that Gingrich and cronies used about the '93 Clinton budget. Watch 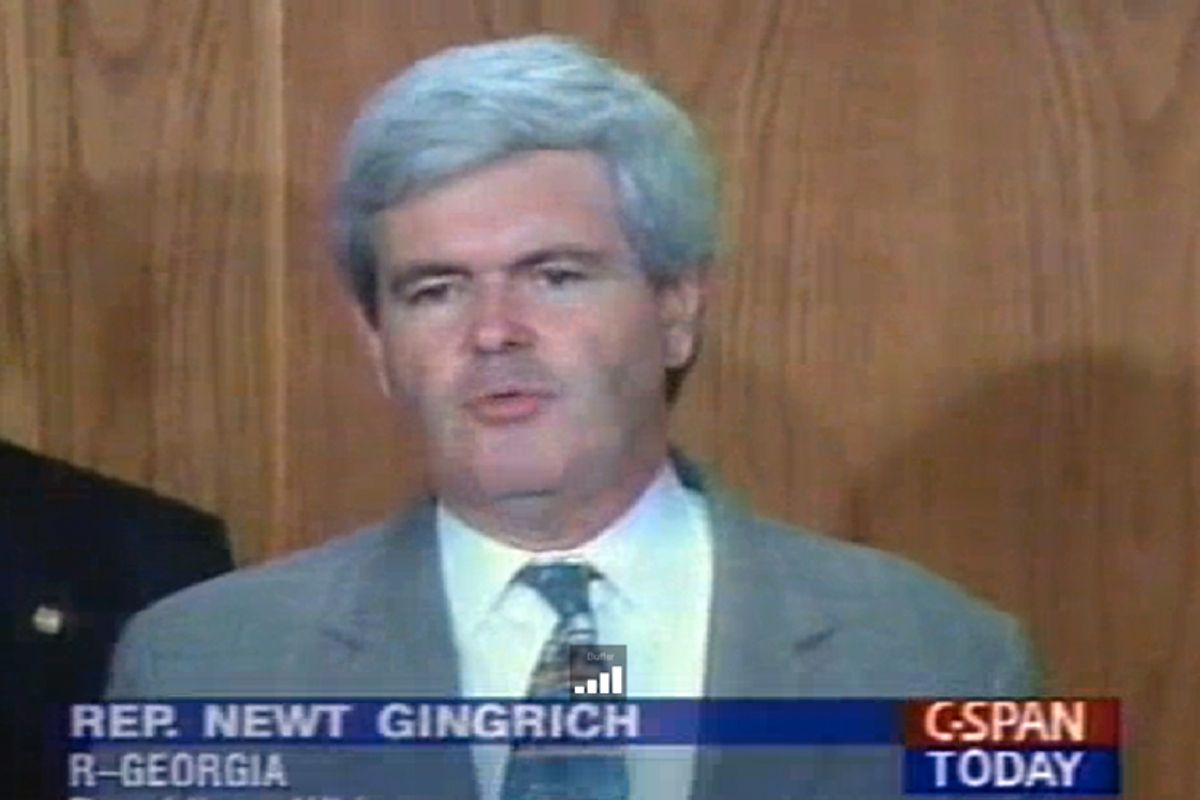 Nobody's asking Yogi Berra what he thinks of the health care reform debate, but he'd probably say it's déjà vu all over again. Listening to the hysteria coming from Republicans, who are claiming the Democrats' reform efforts will destroy not only our health care system but the economy, it's hard not to notice echoes of apocalyptic GOP warnings after President Clinton's budget passed in 1993.

All day Sunday the always entertaining Kagro X was Tweeting hysterical (in both senses) quotes from Republicans in 1993. (Example: The always wrong Dick Armey claiming "The economy will sputter along. Dreams will be put off and all this for the hollow promise of deficit reduction and magical theories of lower interest rates. Like so many of the President's past promises, deficit reduction will be another cruel hoax." Of course Mr. Freedom Works is peddling similar insanity as the Tea Partier-in-chief. Why is anyone listening to him? (Paul Waldman collected many more silly GOP warnings about the 1993 deal, and earlier Democratic social legislation, here.)

Now we all know what the Clinton budget did: The budget, including tax increases, by most accounts set up the economic boom that followed. We all remember that the last Democratic president left a projected $5.2 trillion dollar ten-year budget surplus in 2000, which was squandered by Republicans on a tax cutting, overspending bender in the last eight years. We all know 22.3 million jobs were created during the Clinton administration, compared with 5.3 million during the reign of George W. Bush.

That doesn't stop Republicans from making similar shrill warnings about health care reform today. My colleague Steve Kornacki found this great clip in CSPAN's newly accessible archive: It's Newt Gingrich, John Kasich and other House GOP leaders warning of economic collapse for the country and political disaster for the Democrats after Clinton's budget passed. Gingrich called it "a great victory for the Democratic machine and a great defeat for the American people," and accused Democrats of voting against their own districts. Kasich warned that the bill would stifle investment and cost jobs and predicted working class folks would be hit the hardest, because "people won't want to invest more, and they're going to lose their jobs." He went on to decry "the job killing effects of this program," which is pretty hilarious now that we know the Clinton record on job creation.

Sadly, Gingrich was right that some Democrats would pay for their courageous vote politically (one of them, Marjorie Margolies-Mezvinsky, has had a new day in the political spotlight lately, urging Democrats to vote for health care reform no matter what the immediate political consequences). But maybe because the GOP was proven so wrong last time around, Democrats will be better able to fight the lies this time.

At any rate, if John Boehner and friends are pressed for time tonight when prepping their apocalyptic remarks after healthcare reform almost certainly passes, they can crib from Gingrich, Kasich and friends in this video. No need to thank us.