The 10 most courageous (and 10 most cowardly) House Democrats

Voting for healthcare was much easier for some Democrats than others on Sunday night. Who showed the most courage? 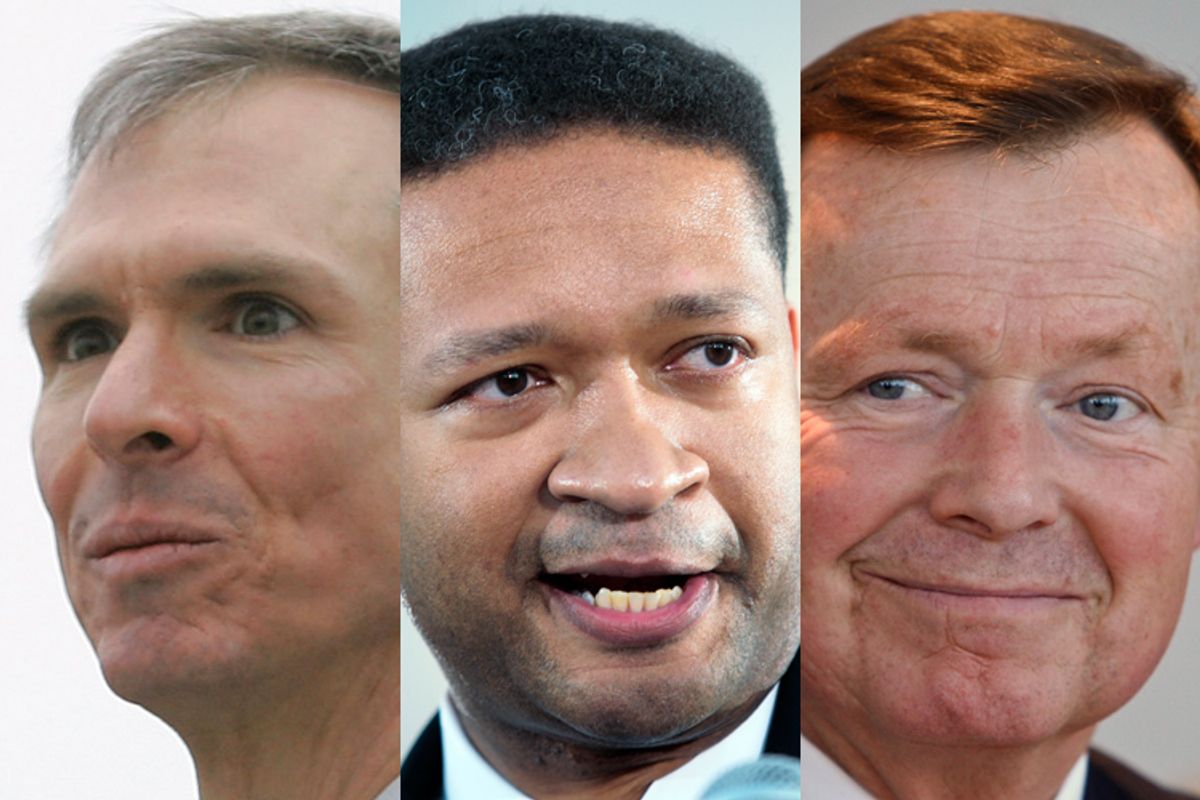 Of the 34 House Democrats who voted against the Senate healthcare bill on Sunday night, there really weren’t that many surprises. The more conservative members of the Blue Dog Coalition -- the ones who are most likely to be found opposing other Democratic big-ticket items -- make up the bulk of the no votes.

But not all of the Democrats who voted against reform come from Republican-friendly districts or face tough opposition in November. Several of them actually come from solidly Democratic urban districts. And not every Democrat who voted yes hails from a safe seat.

The chart below seeks to identify the 10 most courageous and the 10 most cowardly healthcare votes from House Democrats. The formula is simple: The courageous list is composed of pro-reform Democrats from districts with the least Democratic-friendly PVI ratings (which measure a district's partisan tendencies). The cowardly list is of anti-reform Democrats from the most Democratic-friendly districts. (An explanation of PVI ratings can be found here.)

Alabama’s Artur Davis has the most Democratic-leaning district of any no vote. His 7th District gave Barack Obama nearly 73 percent of the vote in 2008. Davis, who ousted an incumbent Democrat (Earl Hilliard) in a primary in 2002, has spent the last few years as the least liberal member of the Congressional Black Caucus. But his departures from the party line have intensified this year as he runs for governor of Alabama -- a much tougher task than running in his safely Democratic district. Whether voting no will help him with his state’s electorate remains to be seen.

Two other eyebrow-raising no votes were cast by Stephen Lynch, from South Boston, and Dan Lipinski, from Chicago’s Southwest Side. Lipinski was part of Bart Stupak’s antiabortion bloc, but apparently wasn’t satisfied by the compromise that brought Stupak aboard in the end.

Lynch is rumored to be interesting in challenging Scott Brown in the 2012 Massachusetts Senate race and seems to be gambling that Brown’s surprise victory in January was rooted in opposition to healthcare, and not simply Martha Coakley’s inept campaign. Of course, his vote could haunt him in a Democratic primary.

(Interestingly, both Lipinski and Lynch voted against the Senate bill but then voted for the reconciliation fix, potentially leaving no one happy.)

In fairness, it should be noted that Davis, Lynch and Lipinski are the only no-voting Democrats to represent truly safe seats. The others on the "cowardly" list hold seats that could be in danger this fall.

On the flip side, there are some Democrats from Republican-leaning districts who were willing to take a real political risk by voting yes.

North Dakota’s Earl Pomeroy and South Carolina’s John Spratt, in particular, may face the toughest races of their careers this fall because they supported reform on Sunday night. Indiana’s Brad Ellsworth also took a gamble; he’s not running for reelection, but he is running to succeed Evan Bayh in the Senate. It probably took less courage for Tennessee’s Bart Gordon, another red district Democrat, to vote yes -- he’s retiring this year.

The Democrat who may have taken the biggest leap of faith, however, just missed the cut for the top 10: Colorado’s Betsy Markey, also at R+6 and widely regarded as one of the most vulnerable Democratic freshmen. She was one of the few who switched from a no to a yes.

The Ten Most Courageous

(Democrats from GOP-friendly districts who voted yes; member name and each district's PVI rating are listed)

The Ten Most Cowardly

(Democrats from the most Democratic-friendly districts who voted no; member name and each district's PVI rating are listed)