Why Boehner is angry -- and Republicans should worry 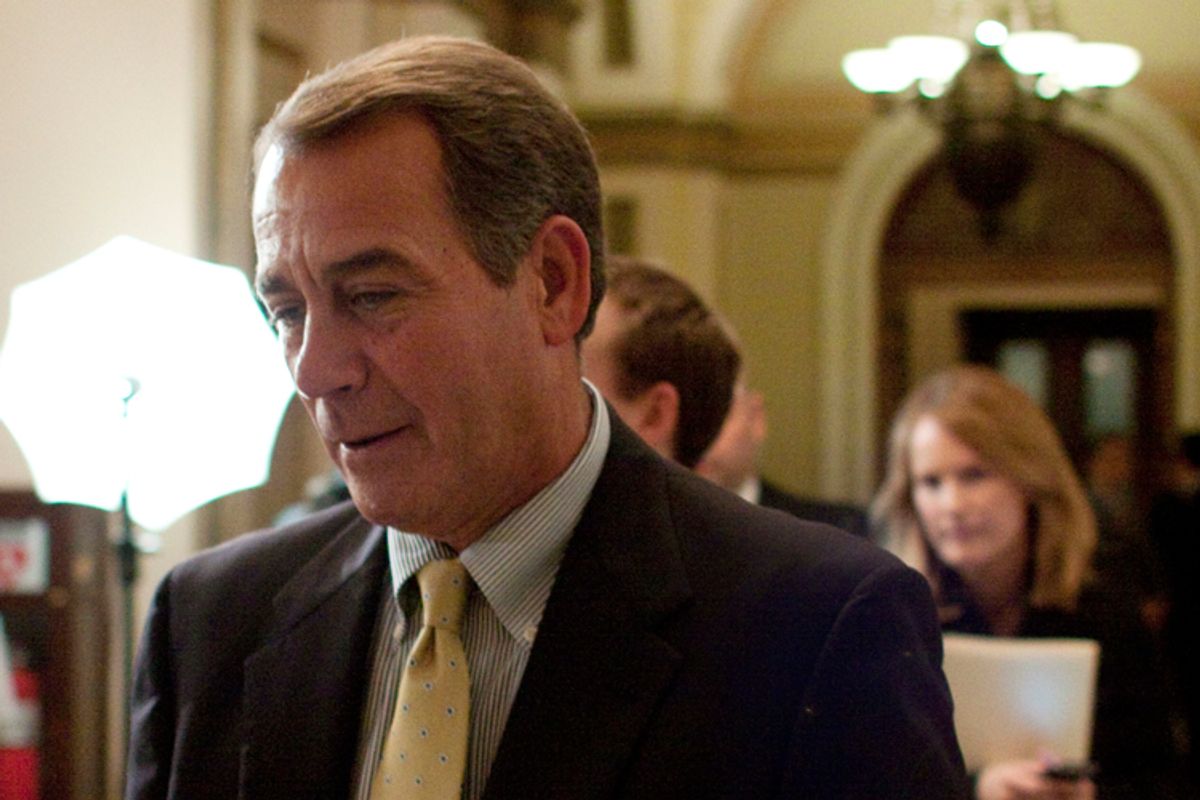 What is the reward for acting with courage and principle, confronting the worst slurs, threats of violence, waves of falsehood, major monied interests, and widespread predictions of electoral defeat? As President Obama said in his remarks to the House Democrats on the eve of their vote for healthcare reform, the only certain compensation for doing what is right will be history’s judgment. Yet perhaps all the forecasts of doom will prove wrong -- as they so often do in Washington -- and voters will honor lawmakers who finally stood up for the core values of their party.

A few days before Sunday night's vote, Dan Balz noted in the Washington Post that the electorate sounds even angrier at Congress than usual -- a threatening portent for incumbents in November. Even in that poll, however, the lowest status was reserved not for the Democratic congressional leadership, whose numbers have indeed dropped, but for the Republican leaders.

No doubt John Boehner is well aware of that public contempt. Watching the minority leader speak on the House floor, pretending to be a populist demagogue rather than a corporate stooge, his anger seemed less provoked by the specifics of the healthcare legislation than with its likely political impact. If he feels so confident that the people will massively repudiate this bill in the midterm election -- and thus make him speaker --why was he so furious? Why did the bill’s imminent passage turn his usual orangey-tan complexion almost incandescent red with rage?

An informed public was always the ultimate peril for the Republicans in this process, so distorted during the past year by wild propaganda about death panels, government takeovers, and the entire mythology of the Obama administration’s socialist-communist-Nazi-totalitarianism.

Creating those crazy expectations was a strategy that depended on the bill never passing. If and when people learn what is actually in the legislation, many of them will realize that they were misled, and will end up appreciating most of what the Democrats have passed, after all.

Certainly that possibility is what  troubles David Frum, who expressed his fears yesterday evening in a post titled “Waterloo” (after the triumphal predictions of Sen. Jim DeMint of the consequences for Obama if healthcare reform were to be defeated). Before he became notorious for writing war-mongering speeches for President Bush, Frum was admired among conservatives for uttering unvarnished criticisms of his own movement, notably in a 1995 book titled  "Dead Right" (a passionate screed that urged the party toward deeper ideological consistency -- much the opposite of his current complaint).

The Republicans bet on killing healthcare reform and lost, says Frum -- and by November, voters will come to understand the appealing aspects of the legislation, even as the broader economic and political environment improves for Democrats. Now he warns, “It's a good bet that conservatives are over-optimistic about November -- by then the economy will have improved and the immediate goodies in the healthcare bill will be reaching key voting blocs.”

Frum is harshly realistic about the chances to reverse this historic step forward: “No illusions please: This bill will not be repealed. Even if Republicans scored a 1994 style landslide in November, how many votes could we muster to re-open the ‘doughnut hole’ and charge seniors more for prescription drugs? How many votes to re-allow insurers to rescind policies when they discover a pre-existing condition? How many votes to banish 25 year-olds from their parents' insurance coverage? And even if the votes were there -- would President Obama sign such a repeal?”

Then the pollsters described major aspects of the bill -- the insurance exchanges, the strict regulation of insurance company policies, the requirement for insurance with government assistance to those who need help, the tax on expensive plans, the fines on those who don’t get insurance, and the public option. Not only did most of those aspects of the bill poll favorably, but the overall legislation ticked up by 8 points when the pollsters asked the same people again whether they support or oppose it. The second time reversed the initial results: 48 percent in favor, 43 percent opposed, 9 percent unsure.

That sharp turnaround in opinion occurred in a matter of minutes during a telephone call with a stranger. Now the president and the congressional Democrats have seven months to make the same argument, and smart Republicans are properly terrified that they will.