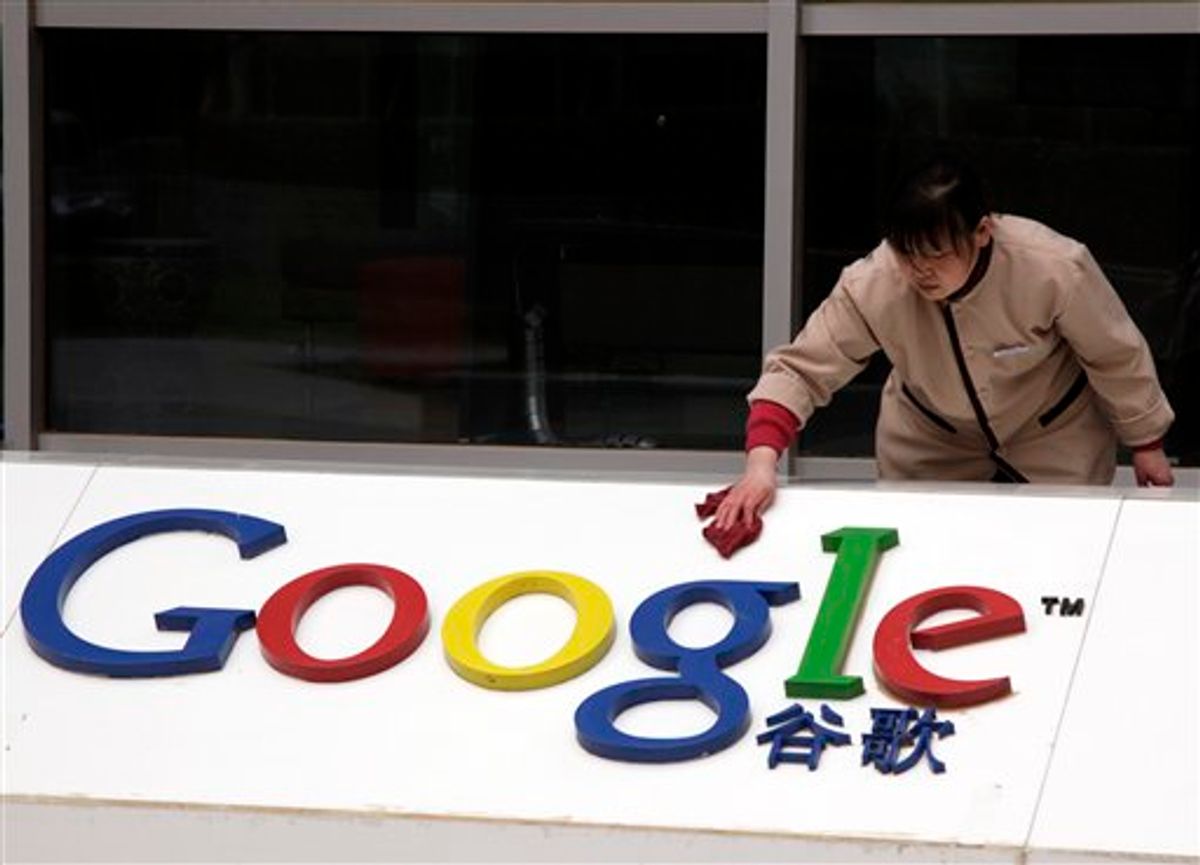 A worker cleans the sign in front of Google China headquarters in Beijing, Monday, March 22, 2010. Google Inc. will shift its search engine for China off the mainland and maintain other operations in the country. It's an attempt to balance its stance against censorship with its desire to profit from an explosively growing Internet market. (AP Photo/Ng Han Guan) (AP)
--

You know things are getting serious when Chinese editorial writers start invoking the specter of the infamous Brtish East India Company in the context of Google's decision to withdraw its search engine services from China. As a symbol of oppressive imperialism, the British East India Co. is hard to beat in a nation where the scars from the Opium Wars still linger, raw and tender.

Despite the colonial era when a foreign company such as the British East India Company could assume an overriding power over a sovereign state, in modern times an individual foreign company never gains the upper hand when it's in trouble with a country's laws.

I'm sure some developing nations would dispute that assertion but let's posit that it is true in the Chinese case. In any event, Chinese state-owned media outlets have been spitting mad all week after news reports suggested that Google was going to make good on its threat to exit China. But one can only imagine the rage that party commissars are feeling now, after Google's announcement via its own blog that it has decided to redirect all search queries originating from the mainland to Google's Hong Kong servers.

We believe this new approach of providing uncensored search in simplified Chinese from Google.com.hk is a sensible solution to the challenges we've faced -- it's entirely legal and will meaningfully increase access to information for people in China. We very much hope that the Chinese government respects our decision, though we are well aware that it could at any time block access to our services. We will therefore be carefully monitoring access issues, and have created this new web page, which we will update regularly each day, so that everyone can see which Google services are available in China.

Google is fooling itself if it thinks that the move to Hong Kong will in any way ease the tensions between the search giant and China. Sure, under the convoluted "one country, two systems" arrangement in which China exerts sovereignty over Hong Kong but allows it is own nominal autonomy, Google may be technically correct that it is "entirely legal" to serve up search results in simplified Chinese characters (the preferred writing system in mainland China) on topics such as the Tiananmen massacre, Tibet, and Taiwanese independence, but symbolically speaking, the strategy is sure to be seen as a yet another obnoxious Western affront.

Hong Kong! Territory seized from China by Britain after the end of the first Opium War -- which itself was a direct result of the East India Company's determination to sell as much opium to Chinese consumers as possible, against the direct wishes of China's rulers. If Google wanted purposefully to adopt the mantle of the Britain's most notorious symbol of colonially arrogant capitalism, it could have done no better than to announce it was setting up shop in Hong Kong, there to broadcast its search results to all and sundry.

I don't want to be misunderstood here -- I am not equating search results with opium, (although some days, after a long day of hitting the search button, one can feel dulled into a narcotic haze). I don't buy the theory that uncensored search results imply an indoctrination in Western values that is similar in heft to extraterritorial conessions. I think Google has the moral authority here and China is in the wrong, which is not something I would ever say about the English presence in East Asia in the 19th century. What surprises me is that Google could imagine that this was any kind of a solution to the stand-off. Given the fact that China already sees the entire dispute in the framework of unwonted Western interference in Chinese domestic affairs, the company's decision to move across the border to the site of one of the most egregious historical embarrassments for China is unlikely to go over well.

China Google How The World Works