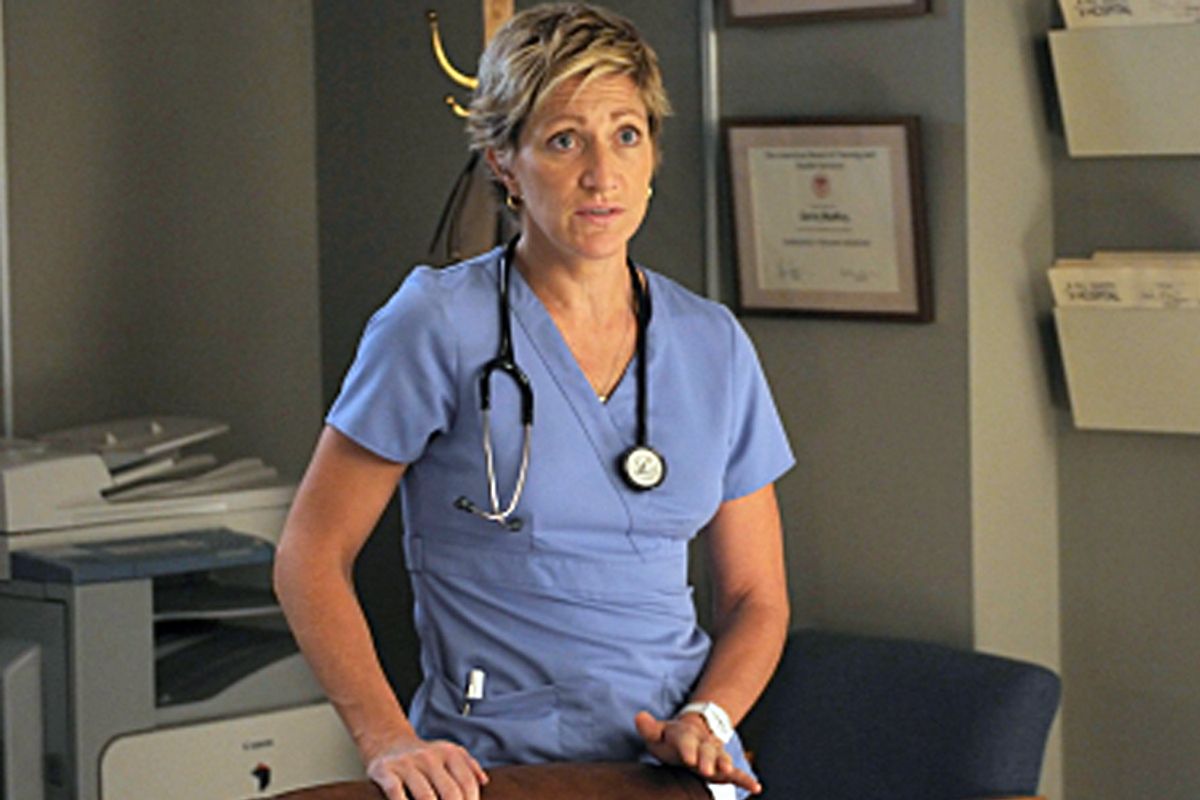 "Nurse Jackie" may be the first show ever made about a drug addict who's very good at her job while high.

A bold central premise, to be sure, made even bolder by the fact that Jackie (Edie Falco) doesn't start the second season (premieres 10 p.m. Monday, March 22, on Showtime) in rehab, which is what you might expect after her world almost comes apart at the end of the show's first season. But then, the show's first season finale was filled with almosts: Jackie's lover Eddie (Paul Schulze) almost told her husband, Kevin (Dominic Fumusa), about their affair; Jackie's boss Gloria Akilitus (Anne Deavere Smith) almost discovered Jackie's habit of breaking rules (both on behalf of her patients and on behalf of her addiction); Jackie's older daughter, Grace (Ruby Jerins), almost had a nervous breakdown.

All of which almost made the first season a little disappointing, when taken as a whole. What did we learn about Jackie by the finale that we didn't know within the first few minutes of the show? There wasn't much character development -- or much of a complete season-long narrative arc for that matter. But the real issue may be that this show is almost a comedy, but not really, because it's too dark and not funny in the ways traditional TV comedies are. The show is almost a drama, but not really, because the characters aren't fleshed out enough and the show's storylines don't end conclusively the way that a drama's plotlines would.

Considering, though, that this is a show about an efficient, effective, on-the-job addict, considering that Jackie doesn't start Season 2 either in a 12-step program or in church, repenting for all of her sins, there may be a reason we should tolerate the close-but-no-cigar style of this story. Thwarting the expectations of the modern dramedy could be part of the point here. When Dr. O'Hara shows up to the hospital on ecstasy and comes on to the new RN, Sam (Arjun Gupta), when Zoey (Merritt Wever) befriends "God," the man who yells insults at people from his apartment across the street from the hospital, when Dr. Cooper (Peter Facinelli) develops a huge crush on Jackie and Jackie tells him he's an idiot for the 50th time, that's the show's writers telling us that they're going to choose the paths that they find entertaining or evocative, standard TV storytelling be damned. And when it comes to ridiculous conversations like this one, between Coop and Jackie, you sort of have to admit that they're on to something:

Cooper: It would be good for us to spend some time ...

Jackie: What us? There is no us. I thought we got past this weeks ago.

Jackie: But there is no "Come here." It's all go away. Go away. Just go away!

Cooper: What do I care? Try to do something nice for a nurse, you know, who's a little bit older than me, by the way.

Jackie: Ok. Thanks a lot. I'm gonna head back to work.

"Nurse Jackie" is like that funny, bad boyfriend who you know will never pop the question. Even though you'll never get exactly what you want or expect, he's just too charming and addictive to kick to the curb. Not only is Falco irresistible as the no-nonsense, occasionally aggressive, wildly avoidant woman whom we haven't come close to understanding yet, but the rest of this clown show bounces along with breathtaking dynamism, teetering precariously between giddiness, rage and existential angst. When Dr. Cooper files a complaint against Jackie to a stern Mrs. Akilitus (who thoughtfully scribbles "World's Biggest Asshole" on her pad of paper as he's talking), then he breaks down crying in her office? When Jackie's lover Eddie shows up at Jackie's husband's bar (again) and manically incites an uneasy friendship with him? These are good, tense moments. We may not laugh that much or cry that much, but if that were the whole point, Jackie would've entered and left rehab, filed for divorce, quit her job and lost custody of her kids by now.

"Nurse Jackie" walks a more subtle path than that. And really, the second season of this show feels more like the second half of the first season. The same tensions are still growing: Jackie is still addicted, Cooper is still full of love/hate for her, and Eddie is still threatening to blow her double life out of the water by exposing their affair to her husband, and Grace is showing signs of needing more help than her parents, who have a shared interest in denial, are willing to admit that she needs.

Most of all, though, "Nurse Jackie" is a show that, through the patients who show up in Jackie's emergency room, focuses on the daily slices of joy and sadness that make up a life. Some days are fun, some days are heartbreaking, and it all adds up to a big picture that's sometimes difficult to look at closely without a hefty dose of pharmaceuticals.

We understand why Jackie needs those pills to get through her day, we just don't know who the real Jackie is yet. Maybe this season we'll find out.