Republicans like to ridicule her as a clueless liberal. But her legislative mastery just put them to shame -- again 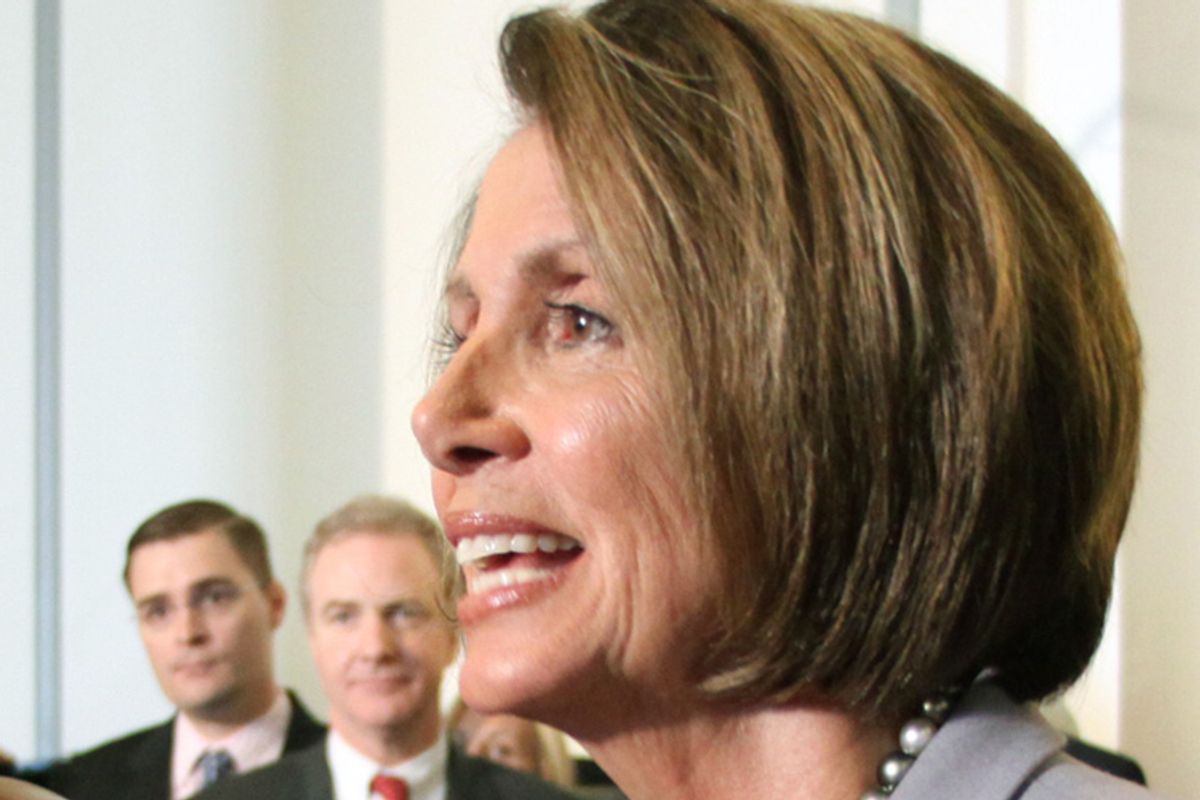 The seeds of Sunday night’s historic House vote were planted not by Barack Obama’s election in 2008, but by a little-noticed internal House leadership contest nearly a decade ago.

Back in the fall of 2001, two Democrats were vying for the vacant position of House minority whip. But the election wasn’t really for the caucus’ No. 2 leadership spot. It was for the top job.

Richard Gephardt, then the Democrats’ House leader, would be stepping down after the next election, so the winner of the whip’s race would be in line to replace him – and to become the House Democrats’ public face for the next decade, at least. Which is why there was trepidation – to put it mildly – among more than a few Democratic members about the race’s front-runner: Nancy Pelosi.

The knock on Pelosi was simple: To anoint a “San Francisco liberal” as a party icon would simply affirm the caricature of Democratic leaders that Republicans had been peddling for years – to devastating effect. Better to pick her less strident, more pragmatic rival, Maryland’s Steny Hoyer, their thinking went. But Pelosi had the votes and won what remains the longest leadership campaign in House history (more than three years of starts and stops) by a 118-95 count.

That verdict led directly to Sunday night. Because the ideological ambition that separated Pelosi from Hoyer is probably what saved the concept of wholesale healthcare reform when it seemed destined for the trash heap just two months ago.

Pelosi, we have learned in recent days, was instrumental in prodding the White House to press ahead with its push for large-scale reform after January’s special Senate election in Massachusetts – even as Rahm Emanuel, once a House man himself, urged the president to radically pare back his vision. And it was Pelosi who then somehow struck a deal with the Senate and found a way to convince 219 of her fellow Democrats to vote “yes” on a bill they hated.

It’s impossible to know for sure how Hoyer, had he been the speaker, would have responded to Scott Brown’s Massachusetts triumph. But his political history shows him to be much more of an incrementalist than Pelosi. It’s hard to imagine his instincts would have been any different from Emanuel’s – and that Democrats, under a Speaker Hoyer, would on Sunday night have been able to boast of expanding coverage to more than 30 million uninsured Americans.

Fittingly, just minutes after the final vote, Hoyer himself hailed Pelosi as “the single most responsible person for this night’s success.”

The passage of healthcare reform is not just a triumph of Pelosi’s liberal idealism, though it is partly that. It’s just as much a triumph of her underappreciated legislative savvy – mastery, really. In the ’01 leadership race, Hoyer was supposed to be the skilled tactician. Pelosi was supposed to be the clueless ideologue. But as speaker, she’s adeptly mixed her idealism with the deft touch of a seasoned congressional insider.

You need look no further than the healthcare saga for confirmation of this. Who else could have pulled off what Pelosi just did? For more than a year, she carefully balanced the wildly disparate interests of her caucus’ various coalitions – the progressives who demanded a “robust” public option, the Blue Dogs who cared mainly about deficits, the pro-lifers who made abortion their make-or-break issue, and on and on. She gave away just enough to each group to keep reform alive – without sacrificing her own bottom line of near-universal coverage.

She also went to war with the Senate after the Massachusetts special election – and won, forcing that chamber’s leaders to embrace the reconciliation process they’d been shunning.

Since Obama’s inauguration, Pelosi has racked up an impressive list of achievements. She pushed the stimulus bill through, then cap-and-trade, and now healthcare. And those are just the headline items. For a woman who supposedly hails from her party’s left-wing fringe, she sure has a knack for winning over moderates when it matters.

Her tenure, of course, is not without its flaws. She badly miscalculated, for instance, when just days after the Democrats won their majority in 2006 she began pushing for John Murtha to supplant Hoyer as the party’s No. 2 leader. Hoyer, humbled by his ’01 defeat (and Pelosi’s success in freezing out his allies from most other prominent caucus slots), had long since given up on the idea of challenging her again. But her paranoid side got the best of her, and she sought to marginalize him once and for all. She failed and was herself humbled.

Politicians like to tell voters that they believe in always doing the right thing – no matter how unpopular it is. But they rarely mean it. As speaker, though, Pelosi has lived it.

For the last three years, Republicans have done exactly what all of those centrist House Democrats worried about in 2001, wasting no opportunity to portray Pelosi as Jane Fonda with a gavel. They’ve certainly had some success. Pelosi’s approval rating is low, especially among independents. (Of course, any other Democratic speaker would probably be in about the same position; that’s the price of being the most visible figure in a body that everyone loves to hate.)

And mostly, Pelosi has shrugged it off. A different speaker looking at the same poll numbers might have been tempted to go along with Emanuel’s scaled-back healthcare vision in January. But Pelosi ridiculed it as “kiddie care.” She knew what was right (at least in her mind), she knew how to make it a reality, and on Sunday night she did just that.

Public opinion is a funny thing. By any standard, Pelosi’s healthcare achievement is significant. But it might not alter her poll numbers at all. She’ll probably still be a Republican punching bag this fall. Republicans, for instance, will probably torment the embattled Harry Reid over the praise he heaped on Pelosi this weekend – when he called her “the greatest speaker the House has ever had.”

Those words just might do Reid in with Nevada’s electorate in 2010. But history just might smile on them.