"Dancing with the Stars": The art of the comeback

A clumsy Kate Gosselin, a vampy Pamela Anderson and Buzz Aldrin rub elbows on the most confusing TV show ever 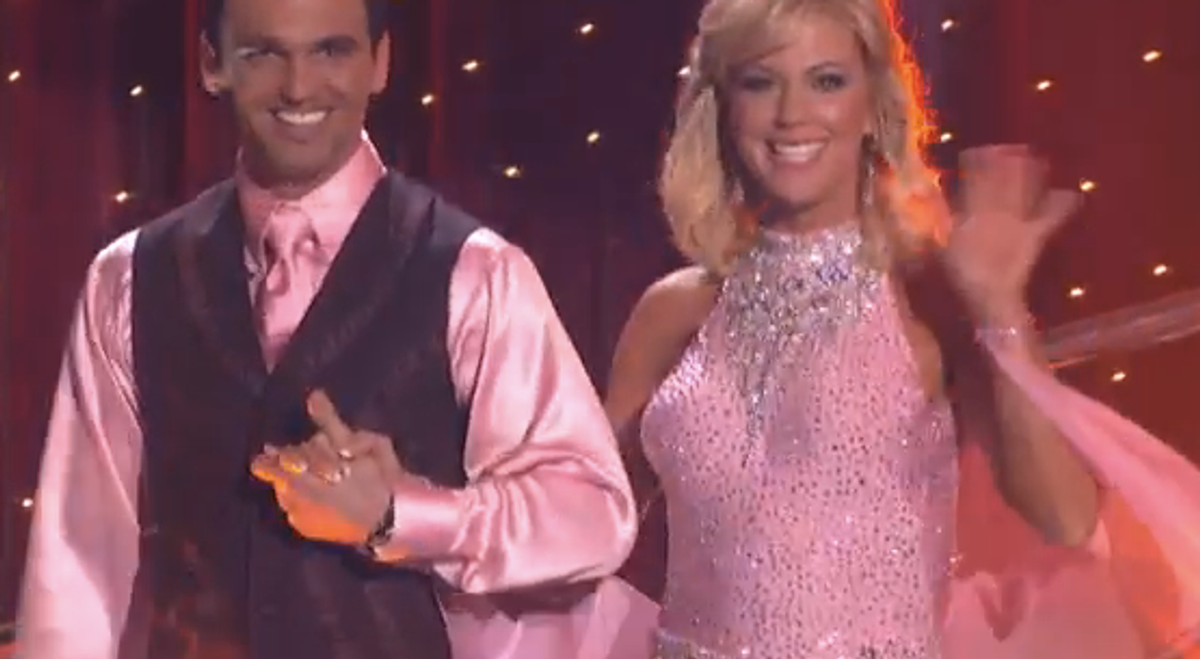 The age of the comeback might need to make a comeback soon. Just four years ago, you could lose your spot in the limelight, then lose your house, wife, fan base, hair, Escalade, VIP status at the Viper Room, grip on reality, decades of sobriety, kidney function, healthy ego boundaries and dignity, but even after all of that, you could still take out a line of credit on your other Escalade, hire a publicist, and make a comeback. (Hence the show "The Comeback," "Rick" Schroeder, Madonna (15 times), the incredible shrinking Demi Moore, and almost everyone else currently on the "celebrity" radar.)

But then, the "celebrity" radar is really more like a loser-detecting GPS system these days, considering how thoroughly dominated it is by dead celebrities ("Where are they now?"), the doctors of dead celebrities, ex-boyfriends of never-really-celebrities, and aspiring sea donkeys who claim they were once strangled by Tiger Woods. We don't care that much about real celebrities anymore, so why would we even notice that Kate Gosselin got some hair extensions or un-celebrity Jesse James allegedly fell for the charms of an aspiring sea donkey with tattoos on her forehead.

Thus, when the various publicity-mongering jackholes slated to appear on the tenth season of "Dancing with the Stars" finally donned sequins and descended the giant staircase onstage to the roar of the crowd, the viewing public didn't swoon so much as ogle the sequin-adorned goods disinterestedly while contemplating switching over to "24."

But some confusion was stirred up – and most publicity teams will settle for confusion, these days, given the notable dearth of genuine interest or curiosity – when Even Lysacek entered the room. Didn't he just win the gold medal a few weeks ago? Then Buzz Aldrin appeared. Didn't he walk on the moon several decades ago? What does he need from this festival of sea donkaphiles?

And what's a feisty lady like Neicy Nash from a cool show like "Reno 911" doing in a sequined sinkhole like this one? Who let Shannen Doherty in here, and how much did she pay that sweet old guy to pretend to be her ailing father who's a big fan of the show? Does Pamela Anderson have some rare form of aging sexpot Tourette's, or is that pouty-lipped head-twisting purring-kitty whiplash routine she's pulling on Damian Whitewood's shoulder aimed at stirring some long-dead spirit in the loins of the free world?

Yes, Monday night's premiere of "Dancing with the Stars" whipped up more confusion than anyone would've expected, from the comeback of "Rock Star" host and post-pregnancy-corsette peddler Brooke Burke to the unexpectedly suave hip swivels and semi-masochistic training techniques favored by Cincinnati Bengals wide receiver Chad Ochocinco. Who would've thought for a second that former demonizable sea donkerella Shannen Doherty would look lovely in her gown, then gesture her way awkwardly across the stage like a partially tranquilized farm animal? Who would've expected Doherty to sob openly after her performance, recognizing that it was Not Good, instead of scratching someone's eyes out to squelch her self-doubt? Who would've guessed that Pamela Anderson would seem so human-like in her training session segments, compared to the strange, shiny mask-face, gigantic sea of teased extensions, and repetitive sucky-cheeked Tourette's she offered up live and in person?

Confusion seems to have taken hold of Kate Gosselin as well, who, despite sporting a hairstyle that doesn't look terrible for the first time in about a decade, can barely form words or the dimmest of smiles in the company of her dance partner. She says she's insecure, then proves it on the dance floor with a performance so leaden it would give lead itself a self-esteem boost. Maybe she should've posed in the sequined dress with the pretty hair then hopped the next bus back to Pennsylvania before opening night.

But that's okay, Kate's just there to make my personal favorite, Neicy Nash, appear all the more plucky and unflappable by contrast. Neicy isn't worried about winning, after all, she's worried that so much dancing might make her lose weight. "If I lose my jiggly parts, you're gonna get it," she tells Louis Van Amstel. "I want to prove that I don't have to be the little chubby girl who stands in the back," she tells the camera later. "I'm gonna be the nice thick strong woman who stands in the front."

Thus, just as the fallen pseudo-celebrity and the second cousin of the fallen demi-celebrity have gone from being C-listers to being indistinguishable from the ranks of actual celebrities, so, too, has "Dancing with the Stars" transformed itself from publicity maneuver and desperate cash-grab to legitimate (what does that word mean anymore?) temp gig for insecure former divas, football players with excess flair, former astronauts, notorious bad mommies recovering from notorious bad haircuts, and nice, thick, strong women who stand in front. Since that just about covers every demographic in America, save for chain-smoking fried-shrimp eaters who sit in back and distracted teenagers with bad skin who text from behind closed doors, it's clear enough that the tenth season of the world's cheesiest show will be a big hit. The comeback may need to make a comeback, but "Dancing with the Stars" is sitting in the catbird seat.