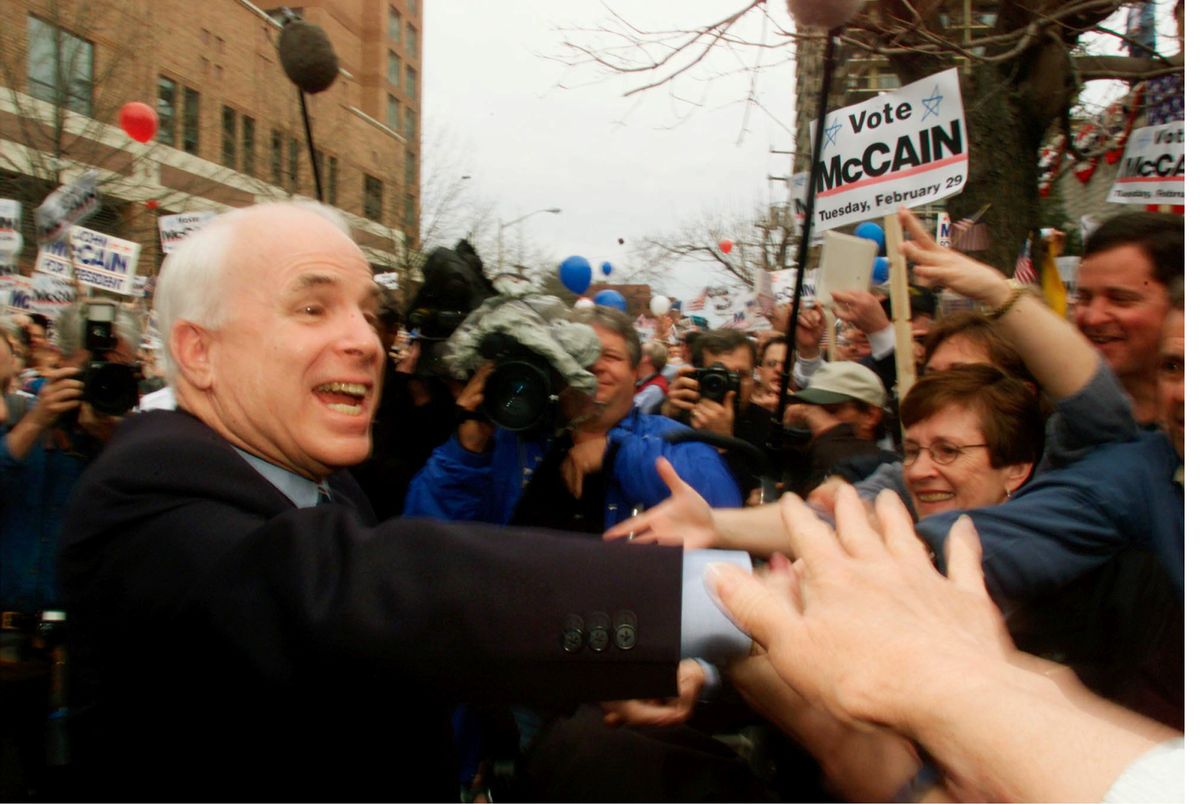 This month, the Harry Ransom Center in Austin, Texas, cracked open the papers of David Foster Wallace, some 48 years after the writer's birth and a mere 18 months after his suicide.

The papers offer a closer look into the writer's psyche, a familiar place to his readers. DFW once said that "the shtick" of his nonfiction work -- his essays and reporting -- consisted of the kaleidoscopic insecurities turning inside his head: Oh gosh, look at me: not a journalist who's been sent to do all these journalistic things.

Perhaps the best example of this approach was published in Rolling Stone almost exactly 10 years ago, when Wallace wrote about his brief journey with Sen. John McCain's presidential campaign. It was a slapdash assignment, accelerated after McCain's surprise win over George W. Bush in the 2000 New Hampshire primary. Bush was supposed to walk away with the nomination, but all of a sudden, there was McCain with an underdog story that swept every American political journalist off his or her feet.

Even Wallace, who self-identified as "NOT A POLITICAL JOURNALIST," fell for McCain. In his Rolling Stone piece, he did what genius writers do -- distilled the essence of a candidate -- but he also brought along that psyche of his, spending just as much time documenting the mundane aspects of life on the trail and mocking the monklike solemnity of the traveling press corps. Think of his 16,000 words as part meditation on McCain, part middle finger to the Straight Talk Express.

Looking back today, it seems as if Wallace foretold a coming trend in political coverage. His piece reads with the now-familiar voice of the reporter-oversharer (think of the road dispatches of any reporter with two thumbs, an iPhone and a Twitter feed). The voice where every pothole and every pit stop is fodder for some sly remark, flung around the world in an instant via the latest online network. A world in which members of the press corps write about the campaign trail like Gen-X anthropologists.

In his piece, Wallace nailed this when writing of his exile from the Straight Talk Express. That bus was reserved for the "Twelve Monkeys" -- a code-name for the dozen top-shelf print reporters writing for the most venerated establishment organs of American journalism. According to Wallace, the Twelve Monkeys "were so totally identical in dress and demeanor as to be almost surreal," managing to stay wrinkle-free as they elbowed to the front of the line for everything. DFW thought they looked at him like a servant -- "as if [he] were a bellboy or gofer instead of a hard-working journalist just like them even if he didn't have a portable Paul Stuart steamer for his blazer."

He described a less pretentious life aboard the second bus, "Bullshit 1" -- the antithesis of straight talk -- which carried Wallace and a burly band of network TV techs. Over several hundred miles and several dozen cigarettes, they tutored Wallace in the ways of campaign media, becoming the source of all the writer's best nicknames.

But soon, Wallace was on the outs with them, too. After he overheard a sound guy bragging about one of his tech buddies "smoking dope" in the bathroom of Jimmy Carter's '76 plane, DFW started pressing for more info. But the sound guy clammed up for the rest of their journey. Wallace described the feeling of accidentally asking tough questions as "both sad and kind of flattering."

This displayed emotion in his writing set Wallace apart from others who covered the campaign. His story featured the kinds of thoughts and observations they would've saved for their diaries or memoirs. But DFW put it all out there, as soon as he could.

Little did he know that the decade that followed would see the rise of the self-effacing, establishment-mocking reporter-oversharer. Blogs and social media tools let us get into reporters' heads the way Wallace let us into his. The comic detachment that he exemplified has become a staple of today's Twitter-fed political journalism -- so much that even members of the Twelve Monkeys have gotten in on the act.

For one: John Dickerson, now of Slate but then a ‘Monkey' for Time. Dickerson has over 1.4 million followers on Twitter, where he's just as likely to link to political and cultural items as he is to describe the banality of his everyday life. Which is somewhat ironic given that Dickerson once chided Wallace for overdoing the banal. In a review of the e-book version of Wallace's Rolling Stone article, Dickerson charged the author with trying "to make a virtue of exile" and writing "a mash note ... wholesale gush" to the riders of "the overflow buses." He even accused Wallace of making up some details.

Could this be? To be sure, there are moments when Wallace's account is almost too entertaining to be true, "as to be almost surreal," the way he described the Twelve Monkeys' appearance.

"I remember there being a lot of things that were just made up," Dickerson wrote in a recent e-mail, "and often made up to bolster the narrative (which is different than just remembering something wrong)." One fabrication that, he says, stuck with him was the supposedly uniform look of the Twelve Monkeys -- a group that was actually quite diverse in gender, age and dress. In fact, said Dickerson, "if there was one person who fit the blue blazer description, it would be me."

Another person who believes Wallace stretched the truth is McCain strategist Mike Murphy. DFW treated Murphy like some sort of anti-reporter superhero, always outwitting the Monkeys' questions. Wallace wrote of how he desperately tried to get an interview, calling it "MurphyQuest 2000" in a footnote to the book version. He also described the similar lengths to which Murphy went in avoiding him, such as ducking around corners.

Not quite true, says Murphy. The writer and the strategist actually struck up a friendship after the campaign, in 2004. And at one dinner, according to Murphy, Wallace admitted (under Murphy's teasing) that he embellished some stuff for comic impact. "I never hid around a corner, but I did pantomime it to kid him," Murphy said last month.

Of course, Murphy and Dickerson might have their own reasons for making these claims. Wallace's piece, after all, stirred plenty of resentment -- particularly from his fellow traveling journalists -- when it ran.

If Wallace did exaggerate, perhaps he was aiming for some larger truth: that he got no respect, that the TV techs knew everything, or that the reporters knew nothing. But Dickerson says the embellishments were plain disingenuous: "He didn't just make the reporters cartoons. He made the sound- and cameramen cartoons, too."

Or maybe it was all just in the interests of good storytelling. Take Wallace's claim that his exclusion from the Straight Talk Express had to do with the kind of steamer he used for his blazer. Not even remotely true, Murphy asserts. "We stuffed him on [Bullshit 1] because he was from Rolling Stone -- not a magazine we were very focused on in the GOP primary," he said. That certainly sounds like a sensible explanation. But Wallace's version is undeniably more entertaining.

And entertainment, fittingly, is now the rule at the establishment outlets of the Twelve Monkeys. Campaign journalists are expected to churn out endless online content, often leaving reporters to make the most of banal interactions and boredom. He insisted he wasn't one, but as a political journalist, David Foster Wallace was ahead of his time.