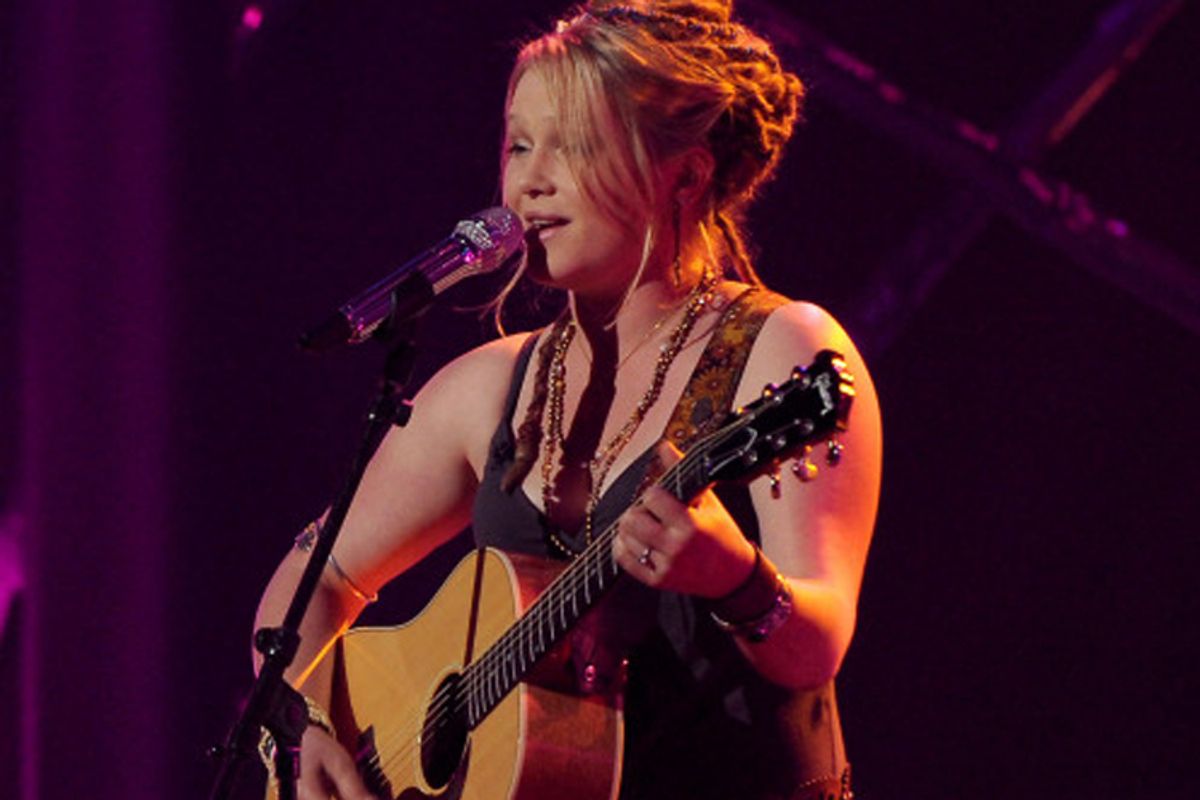 Tuesday's episode of "American Idol" featured the top 11 finalists singing #1 Billboard hits. The good news was that the contestants had literally thousands of songs to choose from -- songs they could make their own, be original and strut their stuff. The bad news was that even that couldn't save Billboard's #1 night.

If you're as disgusted and bored as I am at the complete and total lack of talent, originality and "wowness," this season, you're in good company. So, because I'm in a generous mood, below is my mini-recap for those of you who can barely stomach a recap of any kind.

Lee: Good but I Yawned a Lot

Big Mike: Loungey (I thought of that before Simon did)

Now for you gluttons for punishment ...The FULL AND TOTAL RECAP:

Miley Cyrus was the guest motivational speaker. I groaned when I saw her. To be perfectly honest, this was a knee jerk reaction. I'm not a big fan of Miley Cyrus, but then again I'm not 13 years old. As Miley was being interviewed I was thinking, "Who can take advice from someone with turquoise nails?" But I was humbled. As the show went on, I was impressed with Miley's confidence, composure, encouragement and wisdom. Poor Miley. A 40 year old trapped in a 17-year-old body. Wait: I want to be Miley!

Lee Dewyze: Lee sang, "The Letter." I liked his voice but the chorus lost me. He came off like a young/old Frank Sinatra.

Ellen: "You have a favorite pen and the ink glides out perfectly. It's running out of ink; oh no, I'm losing my favorite pen. You light a fire under it, you lick it. You're back!" OK, what the hell was Ellen talking about? She had apparently spent all week coming up with pre-packaged quips and was to eager to use her new material. I think she liked Lee, but I couldn't tell you for sure.

Paige Miles: Paige sang Phil Collins' "Against All Odds." It was the perfect song choice. Paige knew that she was still in this competition against all odds. But her performance lowered those odds even more. My poor ears were still ringing from all the pitch problems Paige was having (try saying that ten times).

Randy: Uh-oh. Randy was laughing, and that is never a good sign. "Really, honestly, but that was honestly terrible. Terrible. Really honestly. Nothing came together at all." Neither did Randy's feedback.

Ellen had suddenly developed a foot fetish and was fascinated with Paige's high high high high heel shoes (no woman should ever torture her feet like that, ever). Ellen, in the most milquetoast of ways, passed on the music critique. In other words, she refused to do one. Earth to Ellen! You signed on to be a judge on "American Idol." You don't get to pass on the critique. Paula would never have passed.

Kara: "You stopped competing and you stopped trying. It was the worst vocal I've ever heard from you and possibly the season." (Kara was talking to Paige, not Ellen.)

Paige retorted by saying that she had fun singing the song.

Deep breath. OK, this is a huge pet peeve of mine. These silly contestants who are being watched by gazillions of people worldwide and who sing terrible songs and who, when they get criticized, giggle and say, "Yeah, I know I sucked, but I had SO MUCH FUN!" Earth to Fun-Addicted Contestants: This isn't about fun! This is a serious singing competition. Wipe that smirk off your face, grow up, and get serious. We don't care if you're having fun. The world and "American Idol" don't exist so you can have fun. Geez.

Tim Urban, tween heartthrob, sang "Crazy Little Thing Called Love." Tim did what he does best, which does not include singing. Tim got political and serenaded the screaming, crazed tweens in the crowd (the tweens who have the patience of Job and find meaning in their lives by spending four hours texting Tim's number over and over again after the show).

Kara: "It was Zac Efron and 'Hairspray' all rolled into one. You haven't established yourself yet. You acted like you had already made it." Dumb tweens were heard in the background screaming, "We love you Tim!" Grrrrrrrrrrr…

Simon: "I didn't mind the sliding across the stage. It helped distract form the song."

Aaron Kelly: Aaron was already making excuses for his voice using the good ol' laryngitis excuse. Had he been making out with Paige? Aaron sang Aerosmith's "I Don't Wanna Miss a Thing." I wished I had missed the whole thing. I didn't hear any signs of laryngitis. If anything was contagious, it was the blahs.

Ellen: "You have such an amazing voice and you're, what, in third grade?" Another not-funny, pre-planned quip by Ellen.

Crystal Bowersox: Crystal was shown working with Miley. She had her trusted guitar (a.k.a. pacifier) with her. I wanted Crystal to lose the guitar. She didn't, and it didn't matter. Crystal rocked.

Crystal sang Janis Joplin's "Me and Bobby McGee." She looked beautiful, and her voice sounded beautiful. Crystal was fantastic. My only criticism is that I would have liked to see her connect more with the audience. She had her eyes closed way too much when she sang. It's hard to connect to an artist when her eyes are closed. But that is simple fine-tuning. Crystal was light years ahead of the other contestants, in a whole different league.

Simon: "I wouldn't change anything. Up until now, we have listened to a karaoke competition. Then you come on and that was as good as Pink's version, in my opinion. This is about finding a recording artist. I've seen you progress … You're not sliding all over the stage, you took the stage."

Michael Lynche: Big Mike sang, "When A Man Loves a Woman." It was a good vocal, but not distinct and definitely not original. It was just OK.

Ellen: "I did feel like it was a safe choice. It was like driving the speed limit." (These one liners are getting really obnoxious.)

Simon: "It's like you only want one scoop of ice cream and you get 11. I would have just had you, the piano, very simple. You made it very loungey. You have to work this out."

Andrew Garcia's Last Gasp: Miley made Andrew lose the guitar. This turned out to be a big mistake. Andrew sang Marvin Gaye's "I Heard It Through the Grapevine." Without his guitar, he seemed lost and awkward, moving across the stage like some wooden marionette.

Andrew said he just wanted to have fun. These contestants are godless hedonists.

Katie Stevens was trying to take a crash course in Self-Esteem 101. It kind of paid off. Her voice was really great, at first. It was promising but ultimately unsatisfying.

Ellen: "I thought it was your best performance. You're like the Dakota Fanning of 'American Idol.'" Ugggh.

Simon: "Meeting Miley Cyrus was the best thing that could have happened to you. The way you look tonight was so much better compared to the pageant horror outfit we saw a couple of weeks ago." And what about her singing? I think Simon had given up on this competition.

Casey James: Casey sang "The Power of Love." He sang well but seemed very attached to his center position on stage with guitar in hand. Casey didn't take any risks. I would have loved to see him really get into the song and move around the stage. Lord knows the women in the audience would have loved it and happily embraced the distraction from a night of dull singing.

Kara: "You're just on another level. If you had 10 hit songs, you're ready right now to make a hit album. It's all there. You're in a zone now." Casey could sing the phone book and Kara would be squirming with delight.

Simon: "This is not personal, but Kara, I don't know what you're listening to. That song was old-fashioned. Casey, you didn't make it your own. It was like listening to an '80s cover band."

Didi Benami: Didi sang, "You're No Good" and lived up to the song's title. She looked angry, but it was way too much anger. Her facial expressions were exaggerated. Didi needed anger management classes.

Ellen: "I don't get the song choice. You're not no good, you're good." Effusive Ellen was exasperating.

Simon: "There was a certain irony to you screeching out, 'You're no good.' It was like the bad part of a musical just before the interval."

Didi was defensive: "I don't want to be pigeonholed. I'm diverse. If it was pitchy, whatever. I just wanted to have fun on stage."

NEW RULE: Anyone who says they just want to have fun needs to be kicked out of the competition immediately. Period.

Siobhan Magnus: Siobhan sang Stevie Wonder's "Superstitious." It sounded like a whole lot of screaming to me, and her hair looked like it had been plugged into the nearest outlet.

Ellen: "To quote Oliver, 'More please, more.'" Ellen got it wrong. The "Oliver Twist" line is, "Please sir, may I have some more?" Ellen needed to brush up on her musicals and shut up. I could not take any more. Not one more second.

Simon: "I think there's going to be a real split. Some will like it, and I'm afraid some won't. The screaming at the end is becoming your thing, but I don't think you hit the notes the way you've hit them before."

The night was, mercifully, over.

God help us all if I'm right. Parents, take your cell phones away from your children until they develop a brain!