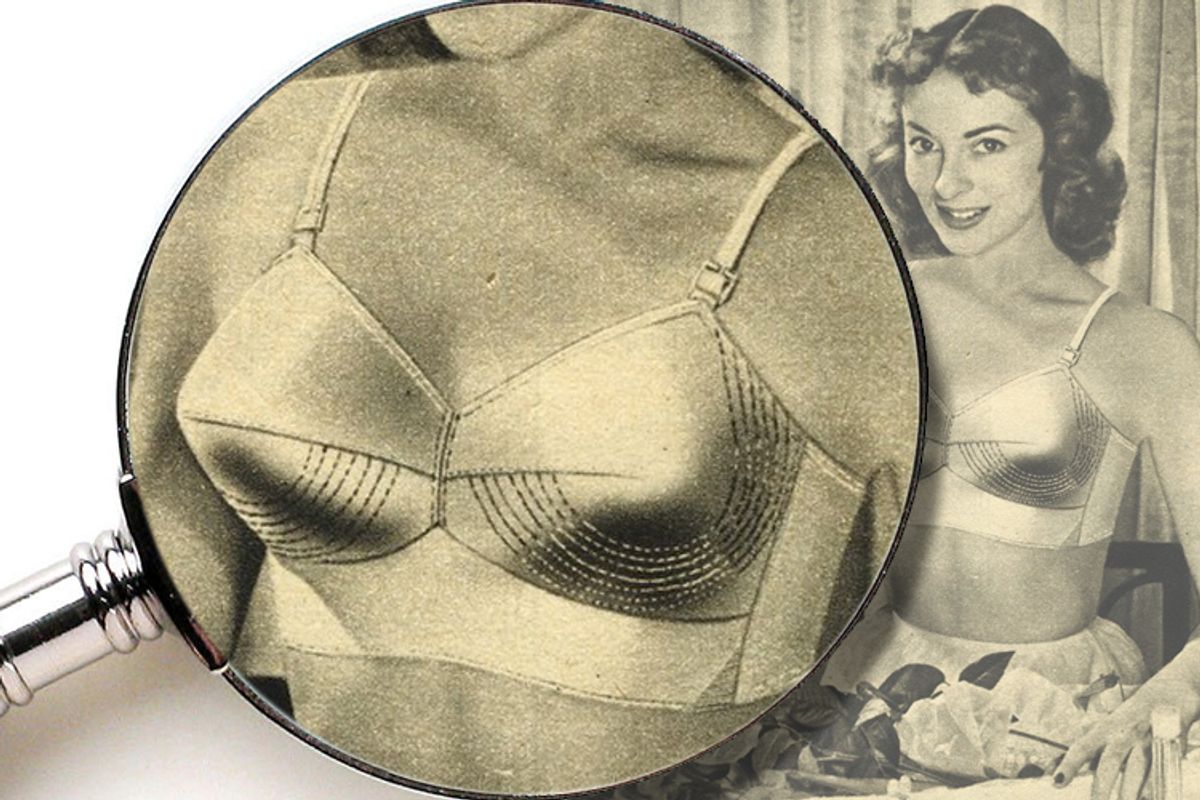 Earlier this week, Women's Wear Daily gave "breast men" (and women) everywhere something to celebrate: Bra sizes are up! Way up! While the median size just 10 years ago was 36C, the median American rack now fills a porn-ready 36DD!

But don't throw a party yet: As basically everyone who's covered the spike so far has pointed out, this is not a good thing. In fact, the consensus is that we're buying larger bras because -- you guessed it -- we're fat. Amy Odell at The Cut is so sure of this that she treats it as a foregone conclusion: "Our boobs are bigger because we are more obese, of course." Of course! Wendy Atterberry at The Frisky spins the news as a silver lining to the puffy cloud that is our national weight problem: "It's no secret that Americans are getting fatter each decade (obesity rates have doubled since 1980), but the news isn't all bad. The upside to our bigger waistlines? Bigger bustlines to go with them!" At least Margaret at Jezebel is onto something when she points out that obesity alone is unlikely to have caused a "sudden 7.7 percent increase in sales last year."

Huh. Could it be that obesity isn't the sole -- or even the primary -- factor here? Considering that in the past decade, cup sizes have ballooned while band sizes have stayed static at 36, it seems likely that this isn't just about weight gain. Sure, when we put on a few pounds, we're liable to store some of that fat in our breasts. But doesn't it stand to reason that bulking up would also make us at least a bit bigger all the way around?

Thankfully, British tabloid the Telegraph actually asked an expert when a similar stat arose across the pond earlier this month in conjunction with a piece on London stores beginning to stock size-K bras. That's right: It's not just U.S. fatties who are busting out of their undergarments. The most common U.K. bra size has jumped from -- brace yourselves -- 34B to 36D in only 10 years. That's two cup sizes and a band size! British women must be gaining weight even more rapidly than American women!

Except that they're probably not. As Dr. Joanna Scurr, a biomechanics lecturer at the University of Portsmouth tells the Telegraph, "Breasts are getting bigger but it's not just because we are getting heavier." In fact, in a four-year study of 300 women, the university discovered that ladies' breasts are, on average, increasing independent of weight gain. "We don’t yet know the reason but it has certainly made women much more aware of the need for correct support," says Dr. Scurr.

So, there you have it. Bustlines are increasing, but not necessarily as a result of fat. But could there be other, non-biological reasons behind the upswing? To their credit, WWD and the other publications who picked up their story did look at one other factor in the bra size increase: The Oprah effect. Odell explains: "Oprah brought full-figured bras into the spotlight when she introduced Bra Fit Interventions to explain the joys of properly fitted bras to women across the nation, and began highlighting Bra Fit Tips for fuller-figured women on her website."

While I'm sure Oprah has had no small effect on women's bra-buying habits, I don't think her audience merely suffered from a lack of information. For one thing, it's much easier to buy a non-standard-size bra online now than it was at the turn of the millennium. Plus, all the media attention may also have had the effect of normalizing something that once felt freakish and shameful: Who knew there were so many other women out there who truly should be wearing a 34F or 32H? It's much easier to admit to ourselves that our chests cannot be contained within the 32A-36D universe when we realize that our predicament isn't so rare, after all.