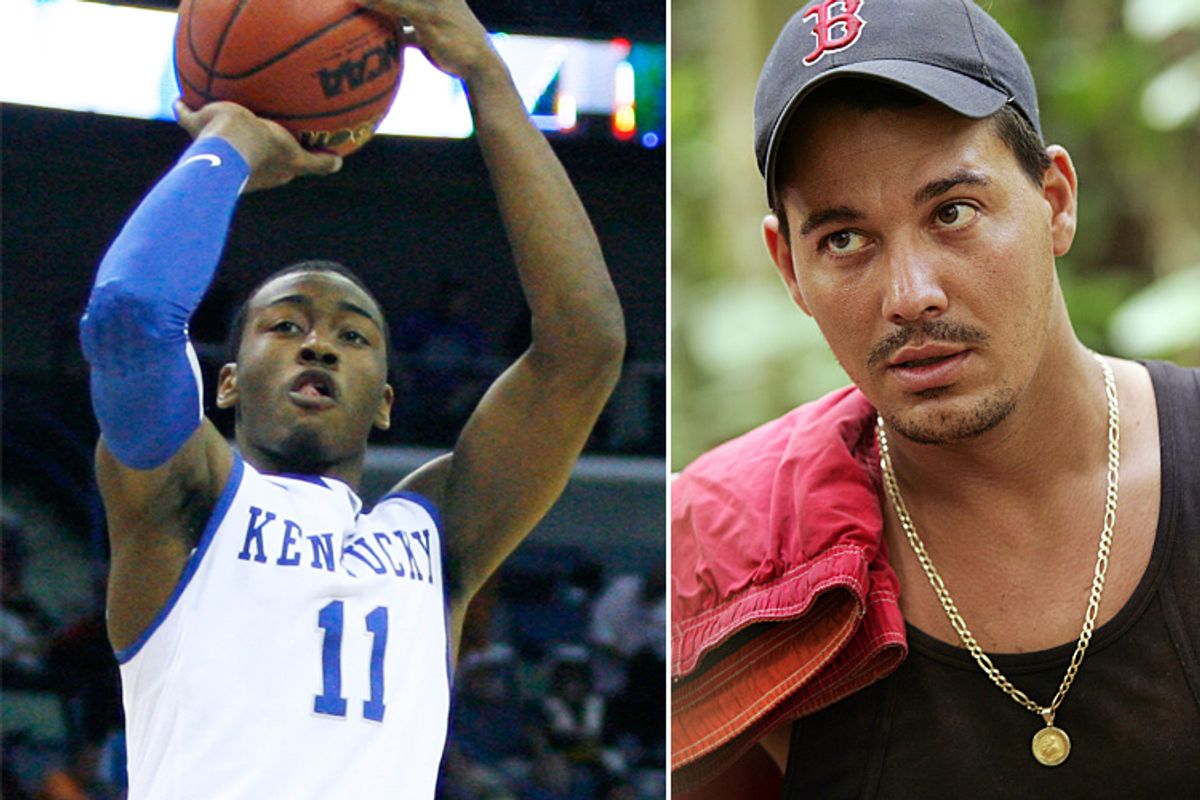 The University of Kentucky's John Wall and "Survivor" Rob Mariano.
--

With all of the NCAA tournament action on CBS lately, it's probably time to revisit the next round of one of the most suspenseful, nail-biting competitions to unfold on the small screen in years: Yes, of course I'm talking about "Survivor: Heroes vs. Villains."

Let's star with one of my personal favorites among the villains, Russell, who is a lot like Michigan State: Quick, scrappy and slightly out of control. Just as sports analysts often underestimate Michigan State, viewers seem to agree that Russell doesn't stand a chance this season. But keep in mind, Russell never looked like he'd make it very far on "Survivor: Samoa," either, making alliances with everyone under the sun, lying through his teeth, calling his closest allies "dumbasses" behind their backs, and becoming a target by finding one immunity idol after another. But crucially, just as Coach Tom Izzo's teams always know when to drive to the basket and when to go for the open shot, Russell knew when to play those immunity idols. True, this time around Russell is even less clandestine about his ambitions, an Achilles' heel roughly equivalent to snapping your Achilles' tendon (as Michigan State's point guard Kalin Lucas just did, leaving his team's Final Four hopes in question). Somehow, though, I look at Russell and I think of Mateen Cleaves: This is a guy who can get 'er done, against the odds. Go Russell!

Boston Rob is more like Kentucky. Everyone respects him, thanks to his track record and his strong fundamentals (solid shelter-building skills, excellent at puzzles, doesn't stir up trouble over trivial clashes). He's hardly even forced to throw his weight around, because people automatically do whatever he tells them to. Just as Kentucky is a shoo-in for the Elite 8 (all they have to do is knock off Cornell, a 12-seed, the basketball equivalent of Coach, a guy who's passionate, multifaceted, but utterly doomed), Boston Rob will easily make it to the team's merge. The only chink in his armor is his hatred of Russell. If Russell catches wind of it, he'll be gunning for Boston Rob and could use the immunity idol to his advantage in any standoff.

No, Amanda can't win it all. No way. Amanda is like St. Mary's, a 10-seed, seriously overachieving but never destined to take home the big prize. Why? Because she doesn't know what to say to the jury. She bats her enormous eyes, tries to sound sweet and harmless, and then they give it to the other guy. It's happened twice before, and it could happen again. Amanda will make it far, mind you (farther than St. Mary's will), but she'll never win.

Rupert is an interesting case. He's a little bit like Purdue, underrated and scrappy. Like the Boilermakers, Rupert is down-to-earth and well loved by his many rabid fans. He works hard around camp and at challenges, and everyone wants to keep him around for a while. Unfortunately, though, Rupert, a nice but somewhat defensive guy (like Purdue, a solid defensive team that still lacks the talent to win against an offensive powerhouse), falls apart when things get ugly.

Jerri, on the other hand, is like Duke. She's smart and great at what she does, but everyone hates her guts and wants her to lose. Can Jerri still win it, somehow? Like Duke, it'll depend largely on her defensive game. Sure, we know Jerri can make friends when she needs to, just as Scheyer and Singler can sink clutch shots. Eventually, though, people are going to want to take Jerri out of the game. She's not soft and cuddly like Parvati or JT. She doesn't come across as entirely trustworthy. That's when Jerri is going to need to employ some savvy defensive maneuvers, aligning with just the right players, distancing herself from the wrong ones, and turning the force of any attack on her against the attacker (taking the charge, if you will). The game of "Survivor," like the NCAA tournament, depends on defense to a deceptive degree. Just as Duke shut down many a big, flashy shooting team by playing strong D, Jerri has a shot at the million dollars if she can deflect attacks and pair up with someone (like Russell or Tyson) who might want to take a widely loathed player to the final two.

Parvati is like Ohio State, a pretty, flashy offensive team that's underrated until opponents start to fall, one by one. Just like Ohio State with its strong shooting game, Parvati knows how to butter up her villain tribemates and make them all feel powerful, rallying them into a high scoring game. Then, at the last second, Parvati sneaks in and steals the big prize straight out of someone else's hands, flashing that enormous smug grin of hers that makes everyone think, Why did we vote for her? Because this has already happened once, it seems unlikely that a jury would give Parvati a second million dollars just for flirting her way to the top again, no matter how undeniably impressive her feminine wiles might be. And like Ohio State, if Parvati gets into foul trouble with the other women (she already called Jerri a "bitter old cougar"), her bench of supporting tribemates just isn't deep enough to keep her on top.

Tom and Colby are like Kansas. Heroic, sure, but overrated (as Kansas is, year after year) and already out of the running despite being highly favored. Sorry, guys. You're too full of yourselves and too bent on looking heroic to play a solid strategic game.

Tyson is like Kansas State. Entertaining to watch, seriously skilled, and merciless. Like Kansas State, which needs to control the game tempo if it has any hope of beating Syracuse, if Tyson can control the game from behind the scenes and make other players do his dirty work for him, he could go very far. On the other hand, why is it so easy to imagine Tyson getting blindsided (and No. 2 seed Kansas State losing prematurely)?

James is like athletic, wisely coached West Virginia. James is stronger than anyone else in the game, he's one of the smartest tribemates in the game, and his comments to the camera are seriously entertaining. Yes, he'll certainly go far. But will he win? No way in hell. Just as point guard Darryl Bryant's injury may take WVU out of contention, James's utter lack of strategic prowess makes him a sure loser at "Survivor." (I guess when you're a gigantic, gorgeous man like James, you don't have to sit around wondering what other people think of you around the clock, so parsing the twisted politics of this game isn't your strongest suit.) Whether it's Kentucky (Boston Rob) or Michigan State (Russell) or Syracuse (JT) who takes West Virginia (James) down in the end, West Virginia (and James) is going down. Lots of people have thought that West Virginia and/or James will win it all. Lots of people are dead wrong.

JT is like Syracuse. Everyone loves him, he's solid in the paint. But does he have a good mind for the game when he's under pressure? Syracuse, like JT, gets sloppy and screws up when they're not controlling the tempo of the game. My call? Syracuse: Possible final four but no title. JT: Final 8 but no million dollars.

So who do I think will win the big prize? My money's on Jerri (Duke), Russell (Michigan State) or Boston Rob (Kentucky) to take it. That said, "Survivor" might be just as unpredictable as the NCAA tournament. Even a series of well-timed, stealthy maneuvers before tribal council and a solid, savvy speech to the jury -- like excellent shooting and relentless defense -- won't guarantee a win for the most agile, wise and tenacious players in the game. Crazy-making as it may be, sometimes Lady Luck is the most crucial player of all.

Maybe that's why we love the insanity of both of these games so much. Let's hear it for heroes, villains and March Madness in all its forms!