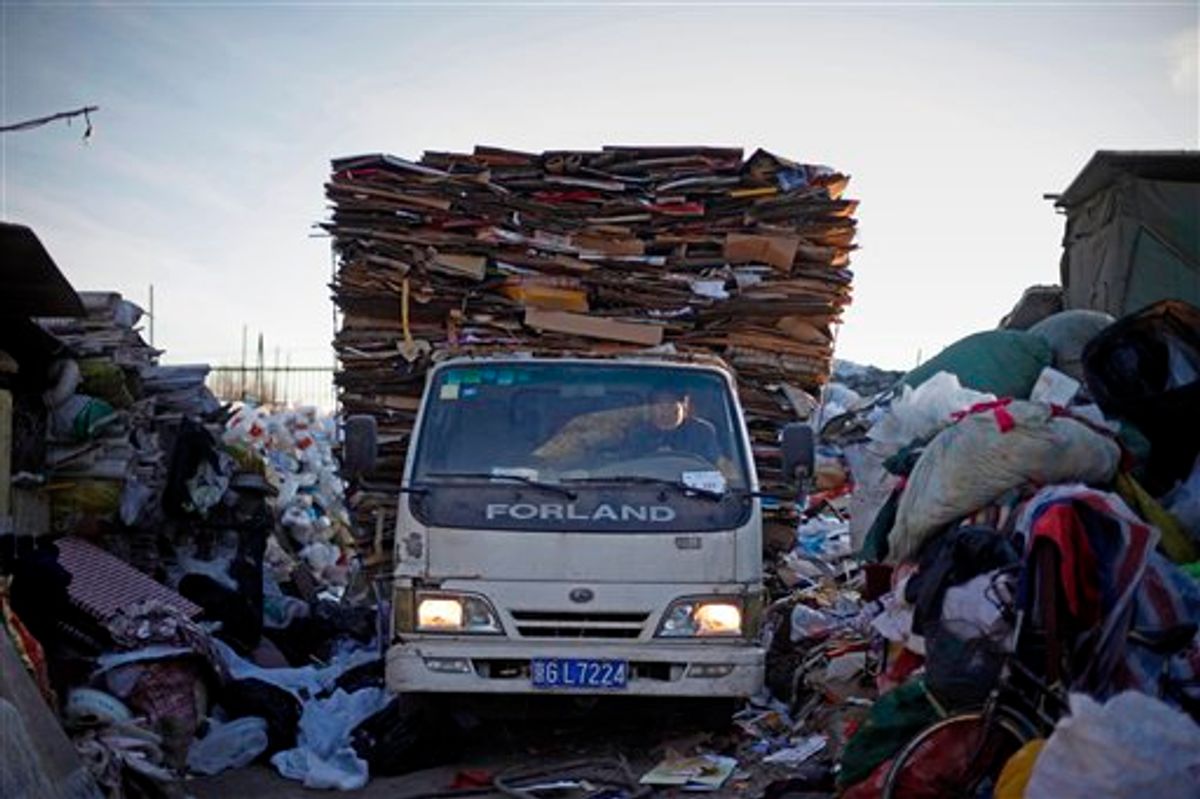 A Chinese driver with a truck full of cardboard set for recycling arrives at a recycling center in Beijing, China, Tuesday, Dec. 15, 2009. China, India and other developing nations boycotted U.N. climate talks Monday, bringing negotiations to a halt with their demand that rich countries discuss much deeper cuts in their greenhouse gas emissions. (AP Photo/Elizabeth Dalziel) (AP)
--

How's the economy doing? If you read the financial press, new home sales -- down to a new low in February -- and durable goods orders -- up for the third straight month -- are getting all the attention. But a tweet from my neighbor, Paul Rauber, points out a more interesting factoid.

Leading economic indicator: Someone poached our cardboard recycling. Means rates are up, means China thinks we can buy more tschotckes.

How the World Works has been tracking the recycled paper market/poaching activity dynamic as a global economy indicator for four years, so I immediately looked for some confirmation. And yes, it's true, Chinese demand for waste paper has rebounded from its recession-induced crash. In January, reports China.org China imported 2.16 million tons of wastepaper -- "a year-on-year increase of 43.1 percent. " Prices for scrap paper have shot up in recent months -- the cost of importing a metric ton of scrap paper from the U.S. to China has doubled since last April, from $140 a ton to $280.

China's impressive export rebound is a major factor, and could be a sign of growing consumer demand in the U.S., but there are other forces at work as well that stretch beyond American appetite for Chinese goods.

India's hunger for waste paper is also rapidly growing, a sign that the global economy may end up having more than one new locomotive on the tracks pulling it forward.

But U.S. paper mills are consuming more waste paper too, due to rising prices for virgin pulp. Rising pulp prices, in turn, can be traced to a couple of factors that have little, or nothing to do with the Chinese economy.

The earthquake in Chile and a dockworkers strike in Finland -- two countries that between them provide ten percent of the world's total supply of pulp -- are further exacerbating the upward pressure, according to the Financial Times, sending global pulp prices near record all-time highs.

For China, the problem is so severe that domestic waste paper processors are looking forward to an upward revaluation of the yuan vis a vis the U.S. dollar, because the stronger the yuan, the cheaper imports of U.S. waste paper will be. Chinese imports in all sectors are surging -- there's even talk that China may record an extraordinary net trade deficit in March. Since the U.S. government may well be poised to label China a "currency manipulator" for keeping the value of the yuan artificially low, the fact that within China there are industry sectors that would benefit from such a move is well worth noting.

After I saw my neighbor's tweet, I looked out my window and noticed that my cardboard and mixed paper had disappeared as well, less than half an hour after I placed them on the curb. Yet another reminder of the relentless interconnectedness binding the world together. Poachers on the streets in Berkeley are reacting to Chinese and Indian economic growth, the structure of tax incentives for the paper industry in the United States, an earthquake in Chile and a labor dispute in Finland. And their industriousness might even be connected to a reduction in U.S-Chinese diplomatic tension, if China pushes up the yuan in part to help Chinese importers lower their input costs.

UPDATE: I just got off the phone with Leno Bellomo, commodities marketing manager for Recology (formerly Norcal Waste Systems Inc.) in San Francisco. The story on waste paper prices gets a little more complicated. Bellomo confirmed the impact of the Chilean earthquake and the black liquor tax credit expiration on pulp prices, but noted that in just the last two weeks, waste paper and cardboard prices had declined by 13 percent. In part this was due to a February spike in Chinese demand that Bellomo attributed to Chinese New Years, and in part because of "skyrocketing" freight costs. Which just makes the story even more interesting.