The Tournament of Books makes a sport of literature, with surprisingly smart results 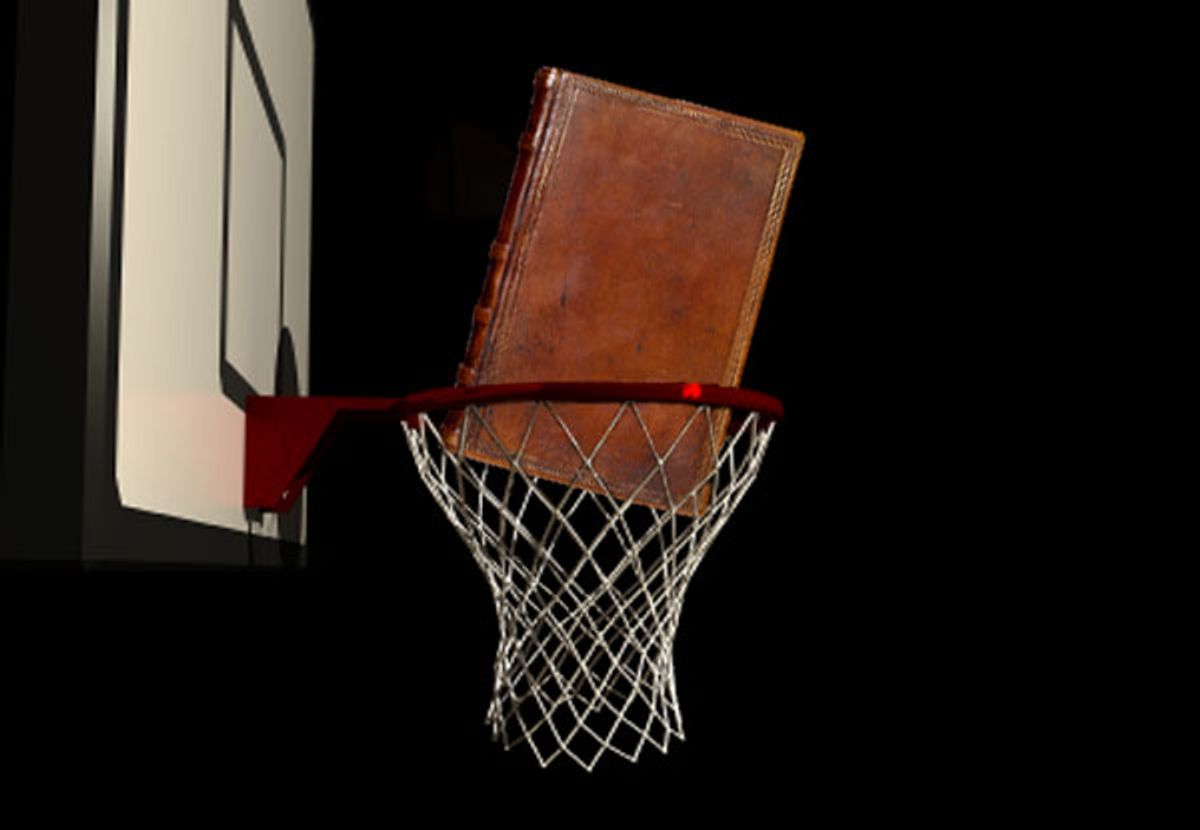 Like Lindsay Lohan, March Madness is something you can't avoid hearing about no matter how hard you try. Unlike Lohan, whose poor-little-famous-girl story is so elementary it can be absorbed through the skin without recourse to higher brain functions, basketball tournaments, with their specialized technical terms (brackets, seeds, etc.) and proliferating statistics, are nearly impenetrable to the novice.

This stumbling block has kept me from paying much attention to the assorted book tournaments that sprout up all over the Web every March. Also, the contests seem so arbitrary, so flagrantly contest-y when the point of a really good book is that it can't be meaningfully compared to anything else -- certainly not in a way that can be quantified. Since sports are all about quantifiable success, the two things remain simply incompatible.

OK, maybe that was just a snooty way of expressing the doomed hope that some tiny corner of the culture might remain uncontaminated by sports metaphors. At any rate, it's time to reconsider. Book tournaments, it must be acknowledged, can be fun. Bracket-mad readers are currently participating in the DABWAHA (Dear Author Bitchery Writing Award for Hellagood Authors) tournament for romance novels, the BSCreview (BookSpot Central) competition for science fiction and fantasy books, and a match dedicated to selecting the world's favorite fictional detective.

The grandaddy of them all, however, is the Tournament of Books, mounted by the Morning News Web site and now in its sixth year. Unlike DABWAHA, ToB doesn't offer prizes to readers who make the most accurate predictions, and unlike all the other contests, it doesn't rely on polling readers to determine the winning books. Instead, a single guest judge selects the victor in each bracket, while the tournament's overseers, Kevin Guilfoile and John Warner, serve up commentary garnished with the occasional dab of sportscaster lingo ("quintuple toe loop"?). There's even an official statistician who crunches such questionably significant numbers as (I think I have this right) the ratio of an entry's length to its likeliness to ascend to the next round.

The ToB has a healthy sense of its own absurdity, evidenced by the fact that the first round put Hilary Mantel's doorstop historical novel set in the court of Henry VIII, "Wolf Hall," up against "Logicomix," a graphic "novel" by Apostolos Doxiadis and Christos Papadimitriou about Bertrand Russell's effort to establish the logical foundations of mathematics. Both could be called historical fiction, but beyond that, the notion of weighing them against each other is so silly that it effectively pegs the entire contest as a goof. ("Wolf Hall" won that round, by the way.)

Because the competition itself is essentially meaningless, ToB is a Trojan horse. Under the guise of a sports conceit, it encourages people to read outside their comfort zones and reflect on the often knee-jerk judgments they make about books they've never even cracked open. In what other circumstances (besides having a job as a book reviewer) might someone wind up reading both John Wray's "Lowboy," a novel about a schizophrenic 16-year-old, aptly likened by judge Andrew Womack to a "cool indie flick," and Kathryn Stockett's best-selling book club favorite, "The Help"?

It's in Guilfoile and Warner's commentary that some of the most interesting discussion takes place. Of "The Help," Warner writes, "When I read it, I was pleasantly surprised, which is far more of a commentary on my attitudes than the book itself which is a highly competent and compelling piece of fiction." Nevertheless, he was troubled by the white author's use of black dialect and the novel's "sanitized" depiction of racial violence in the mid-20th-century American South. Stockett's book made it to the next round, where judge Alex Balk defended an author's freedom to write in whatever dialect she pleases, but ultimately concluded that the "artifice" of Stockett's dialogue was too obtrusive. He gave the nod to Colum McCann's National Book Award-winning "Let the Great World Spin."

That choice, in turn, prompted Warner to ruminate on "the core conundrum of our (and really any) contest," which is: "by what criteria are we deciding what's 'best'?" It seemed obvious to him that the McCann book is the more "literary," but by the standard of "raw reading pleasure," the two novels were neck and neck. Guilefoile points out that the McCann novel also contains a passage written in black dialect, and asks himself why that was less problematic to him than in "The Help." He concludes that what troubles him about Stockett's novel is that despite being written in black dialect, it's "fundamentally about white people."

Thoughtful conversations about books that manage to cross genre boundaries and the high-/middlebrow divide while remaining respectful of other readers and their tastes are depressingly rare. The coin of the realm is contempt, with one side overeager to demonstrate the superiority of its discernment while the other resentfully thumbs its noses at the snobs. Most of the time, neither faction really knows much about what the other is reading, and the proceedings quickly devolve into an empty roundelay of insults and pose-striking. Although past ToBs have seen Guilefoile and Warner a shade too eager to play the fool, this year the tournament, for all its faux-gladiatorial swagger, has bloomed into a rare pocket of civility and informed intelligence.

Honestly? I couldn't care less which title triumphs in the Tournament of Books. (Since the prize is a "live, angry rooster," victory would have to be called a mixed blessing.) This is one case where it really matters not who wins or loses. It's all in how they play the game.