Pundits wonder if females could have saved the economy. But is this about gender equality, or crying for Mommy? 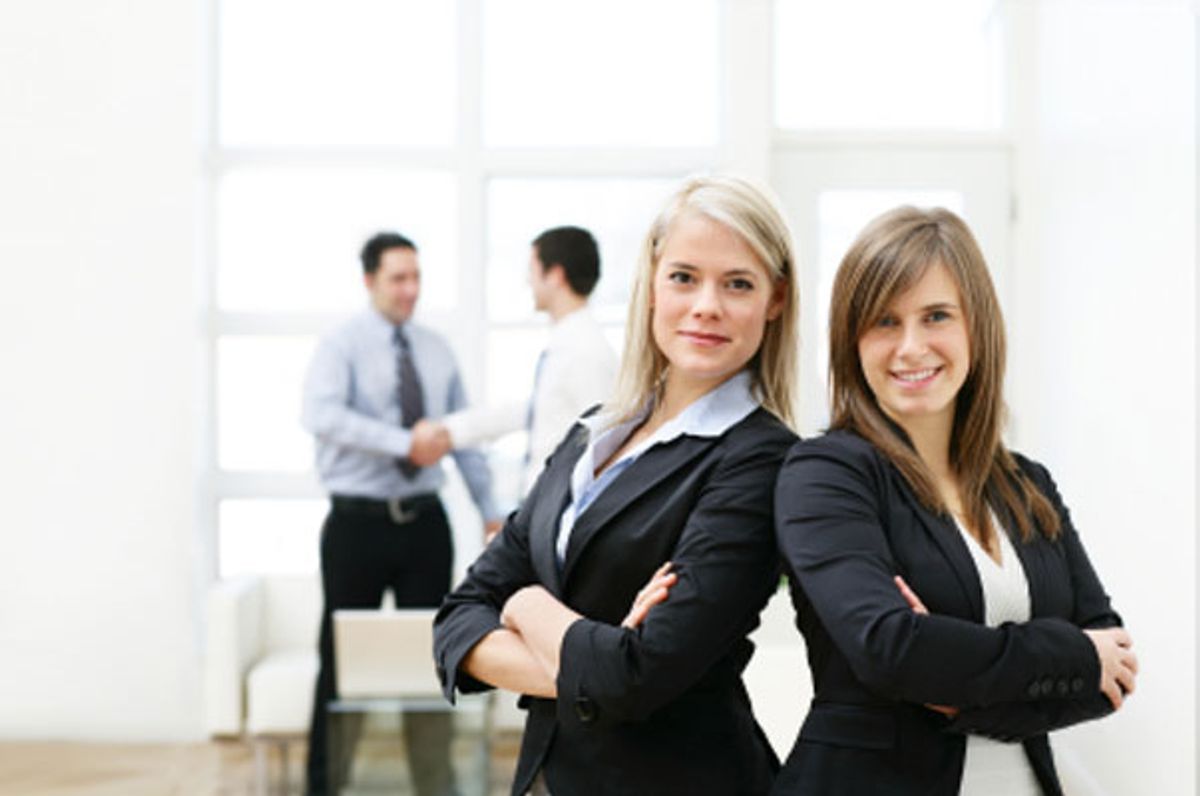 Cheer up, all you lady business school grads of 2010! Put a smile on your face, unemployed female i-bankers! Sure, you may be sending your résumés off to sinking companies with nonexistent positions, the world economy may have tanked, and we don't have any effing clue how you'll pay off your loans either.

But take heart: No one blames you ladies for this fiasco. See, our pundits seem to have figured out that many of the firms generally held responsible for the economic meltdown, whether by choice or happenstance, weren't particularly keen on hiring women in the first place. And in light of that, some have decided to blame the whole damn mess on the very thing that (allegedly) makes men beat their chests, holler at cute girls in skirts, use the hand rail at the local park in a possibly lethal manner, and lose all their cash to the bookies and the bankers. It's all about the testosterone, you see. And since us girls tend to have an awful lot less of that, we might just be able to save Wall Street. If, you know, they'd let us.

The idea that the irrational exuberance of the bubble years could be a direct result of "testosterone poisoning" has been kicking around for a year or more. Salon's Andrew Leonard wrote last spring on two Cambridge neuroscientists, John Coates and Joe Herbert, who found that German traders tended to have unusually high spikes in testosterone and cortisol, and speculated that an overdose of these natural steroids could lead to irrational behavior. Writing in the Huffington Post last fall, Dr. Sasha Galbraith proposed a simple solution to curb risk-taking on Wall Street: Hire more women. This week brings us a new take: Over at New York magazine, Sheelah Kolhatkar wonders, "What if Women Ran Wall Street?"

Well, to begin with, we would apparently clean up the place. Ladies, according to some of the guys Kolhatkar interviewed, keep men from doing dumb shit. Having women around "prevents extreme behavior -- or irrational exuberance." As Terry Burnham, author of "Mean Markets and Lizard Brains: How to Profit From the New Science of Irrationality," puts it: "Women are the brake pedal." This makes professional women sound a little too much like glorified baby sitters -- or, ah, wives -- and thus it's probably no accident that one trader compares the influence of a woman in the office to that of a wife. Married guys, he says, are less likely than their single friends to "go skydiving, or go out drinking all night with your buddies, or you may not pursue that Ironman." (That guy is also soon-to-be divorced, which reminds us that one man's brake pedal is another man's buzz kill.)

But the difference between men and women traders, according to many researchers Kolhatkar interviewed, takes place on the chemical level. She follows up with John Coates and Joe Herbert, the Cambridge researchers, who paint a terrifying portrait of the trading floor as awash in beastly men practically frothing at the mouth, awash in testosterone, which has induced "clinical symptoms of mania." These men, says Coates, were "delusional, euphoric, overconfident, had racing thoughts, a diminished need for sleep." Women, on the other hand, "tend to be more conservative," perhaps because we have less of the devil chemical running through us. (According to this piece, single men and meat eaters have more testosterone; married men and stay-at-home dads, less.) We come off as the moderates: One female trader even likens her willingness to ask for help to women's tendency to "ask for directions while driving." (On the other hand, the joke circulating at Davos was that if Lehman Brothers had been Lehman Sisters, it still would have gone broke -- it just would have made less during the boom years.)

Given the havoc that rogue traders have wrought on our world economy, it's hard not to take it as a compliment when pundits suggest that things could have been better, if only we'd left the women in charge of the castle. But the idea that women are kinder, gentler, less likely to gamble away the rent money is ancient, and has rarely helped us much. Keep your woman as totem of moral superiority. Me? I'm fine with another flawed, fascinating Nancy Pelosi or Hillary Clinton. As one commenter on the New York magazine puts it: "Maybe the reason women haven't screwed up as much in politics or finance is because, as a minority in both, they haven't had much opportunity to do so. The day we know women have achieved true equality with men in these fields is when equal numbers of them are going to jail for corruption." I tend to agree.