Competitive eating: The most American sport?

Amid the push toward healthier food, the popularity of eating contests continues to soar 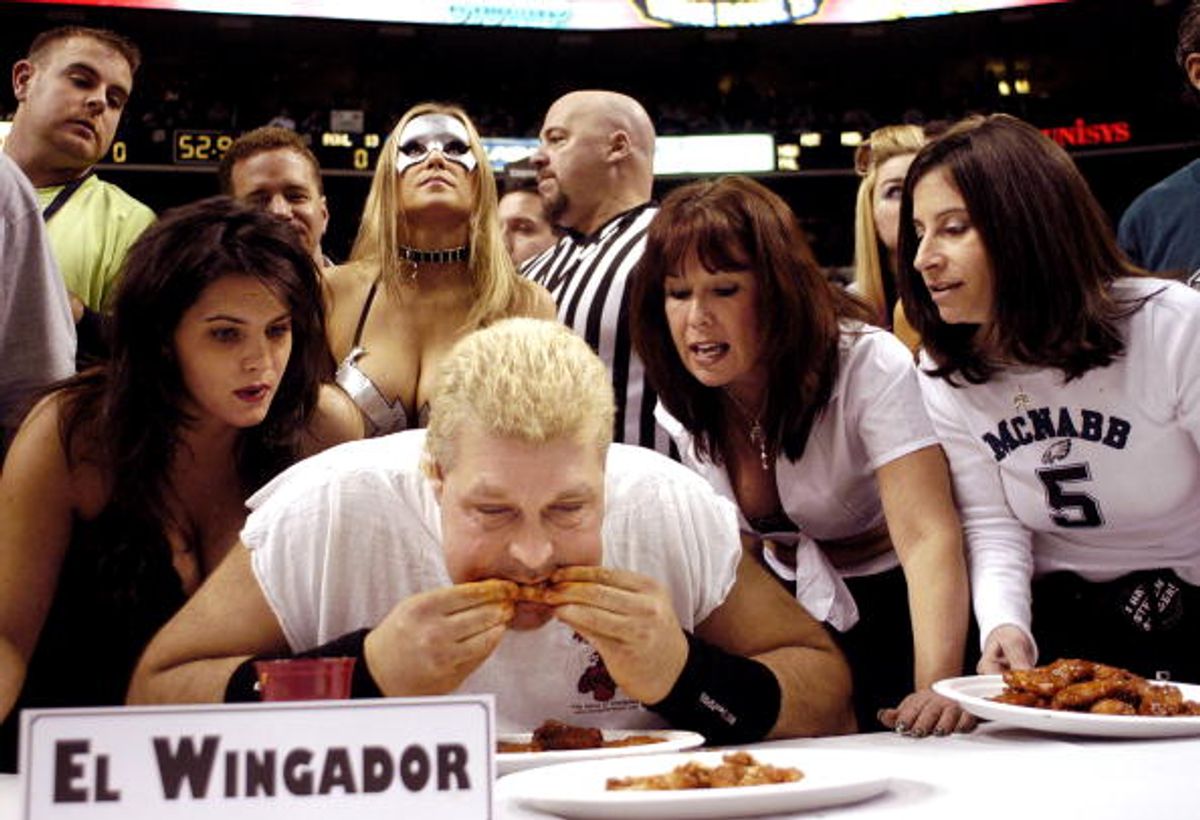 PHILADELPHIA - FEBRUARY 4: Bill "El Wingador" Simmons is cheered on during Wing Bowl 13 at the Wachovia Center February 4, 2005 in Philadelphia, Pennsylvania. An estimated 20,000 spectators gathered to watch the buffalo wing eating contest. Wing Bowl started 13 years ago when a Philadelphia radio personality came up with the idea as an alternative to the Superbowl because he believed the Philadelphia Eagles would never again make it to the Superbowl. (Photo by William Thomas Cain/Getty Images) (Getty Images)
--

It's crude, it's rude, and it's all about eating disturbing amounts of food. This week, the trailer for "Nacho Mountain," the first fiction film about the world of competitive eating, has been circulating on food blogs. The low-budget independent film tells the story of Keefer, a man who loses his job and begins participating in underground eating competitions.

Unfortunately, based on the trailer, the gross-out comedy (which has yet to get distribution) isn't all that much to get excited about (it appears to be an even less funny version of "I Hope They Serve Beer in Hell"). But it serves as a testament to the extent to which competitive eating has managed to insinuate itself into American culture over the past decade. In the past few years, the eating contest has turned from a fairground novelty into an organized circuit -- with a supervising body, professional competitors, and hundreds of thousands of dollars in prize money.

It has managed to do this at a time when worries about obesity and overeating have prompted everything from salt-regulation legislation to Jamie Oliver anti-obesity reality shows. To find out why competitive eating continues to have such a hold over American culture -- and what it says about Americans' attitude toward food -- we called Ryan Nerz, a competitive eating announcer and the author of "Eat This Book: A Year of Gorging and Glory on the Competitive Eating Circuit."

The competitive eating world has grown dramatically over the past few years. Where did this widespread popularity come from?

The real start of this modern era of competitive eating was in 2001 when Takeru Kobayashi won the hot dog eating contest in Coney Island by doubling the record and eating 50 hot dogs in 12 minutes. It really started catching on in 2004, 2005, when the number of eating contests per year went from 30 or 40 to about 100. The International Federation of Competitive Eating (now known as Major League Eating) has done a fantastic job of relentlessly going after brands to sponsor these contests -- casinos and food companies. Now there's probably about $250,000 of prize money a year.

And there's been lots of documentaries on the Travel Channel, Discovery, Spike TV; there's this movie ["Nacho Mountain"]; all these guys have blogs, and Facebook pages and fans and, believe it or not, groupies. It's not the Olympics yet, despite Major League Eating's real intention of having it be in the Olympics. These days, Nathan's famous contest gets as many viewers as some of the games in the Stanley Cup finals. If you consider how absurd many feel the contest of competitive eating is, it already has become a successful sport, but I feel like it's plateauing, frankly. I'm shocked that it's gotten where it is.

Why don't you think it will get much more popular?

I just think it's too redundant. They just keep eating. That's all they do. For an announcer it becomes frustrating. Sometimes one person is eating faster than the other, or the person has some sort of technique to break apart a chicken wing, but after a certain point, I just want to be like, "They're eating and they're eating and you're watching and I'm talking." It's just the same thing over and over again. There are no passes or dribbles or fouls. It's just eating. There's an inherent ceiling.

Why do so many people like watching people gorge themselves?

It's this uniquely American spectacle that is half sport and half magic. People can't wrap their heads around the idea of eating 69 hot dogs in 10 minutes, so it does have an element of magic. Though, if you want to be pessimistic about competitive eating, it's also a kind of a freak show. It's a little bit like watching a train wreck and you try to hide your eyes and peek through your fingers.

What makes it uniquely American?

Well, that's not entirely accurate. Japan also embraces it and I've announced mince pie eating contests in England, a chicken satay contest in Singapore, and a dumpling one in the Czech Republic. But I think Americans are just insanely competitive people, and as such we want everything to become a competition. If you look at where new sports really stem and proliferate from, America is pretty up there -- snowboarding and all these newfangled sports. In America we're so inundated with different sports and media that we have an appetite for a new and esoteric sport that allow a small number of people to be experts in it.

I think there's a degree of truth to that. Certainly if there's any group of people that I've talked to who are confused, disturbed and outraged by competitive eating it's the French and the Italians. We have fast food places where you eat by going through a drive-through and grabbing some fries and a burger -- that's a pretty utilitarian process. It's not much of a leap of logic from eating in that way to timing yourself for 10 minutes and seeing how much you can eat.

In the past few years, there's been an increasing move to regulate the way people eat -- limiting trans fats and posting calorie counts on menus. Do you think the popularity of competitive eating is a backlash against that?

There's a little bit of a working-class mentality where guys are like, "Fuck you, I'm going to eat a bacon double cheeseburger because I'm a man." It shirks this new paternalism in the same way that New Yorkers, I think, cut back on smoking at first when it was banned indoors and it came back with some enthusiasm and now there are places where you know you can smoke after midnight. To me competitive eating is probably more of a curiosity [than a political statement].

The best contest was probably a one-minute raw onion-eating contest in Maui, where they ate  sweet onions like apples. I like the deep-fried asparagus contest in Stockton, Calif. It happens in late April. There's tens of thousands of people there to celebrate asparagus -- they drink things like aspara-tea -- and it's just a really weird and oddly pure sort of event. The record I love the most is the mayonnaise record, 8 pounds in 8 minutes.

On the other end, there's the Wing Bowl, in which 30,000 kids in Philadelphia's Wachovia Center watch fat dudes eat wings while being flanked by naked women. I found it to be a version of hell on Earth. I needed to go home and take several showers to get the Wing Bowl out of me, but a lot of people think it's a very American thing.