After receiving zero GOP votes for healthcare reform, Dems are being told to put bipartisanship before achievement 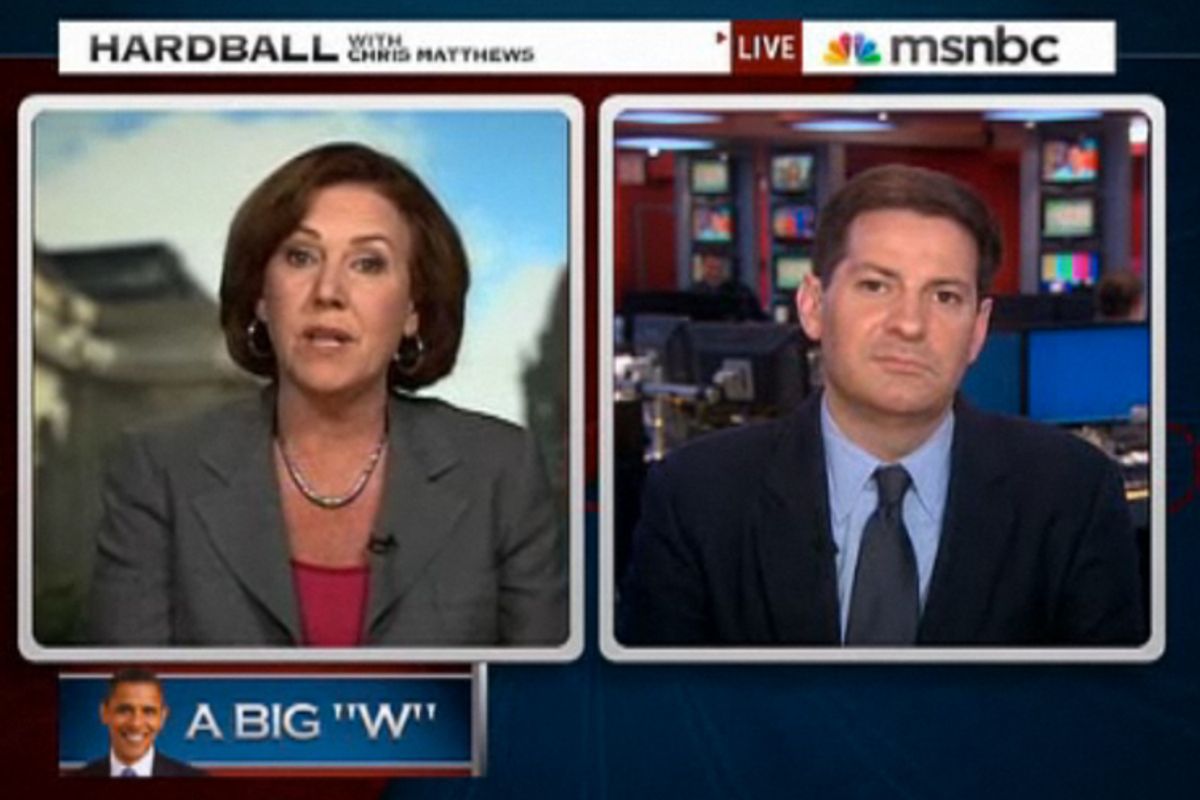 As Democrats take off their party hats and try to move beyond their big healthcare reform triumph, Time's Mark Halperin has some bad news: Mainstream media machers are still going to expect them to pursue bipartisanship, not their own policy agenda, as a major goal.

Appearing with me on "Hardball" today, Halperin took issue with my belief that the Democrats' impressive healthcare reform success taught them what they could do with the majorities they own in Congress. I said I expected them to spend some time figuring out what else they could achieve with those numbers -- and with a new spirit of cooperation within their own fractious caucuses.

Halperin disagreed. "The biggest story in politics right now is the White House calculation, do they do things substantively and politically, to try to build bipartisan cooperation, or do they do, as Joan was suggesting, learn that they can ram things through on education, on economic development." Then things got strange; from my point of view, Halperin was describing Opposite Day reality: "They could make the choice -- rewriting the choice they made at the beginning of the administration, when they went another way, they went with an all Democratic solution -- to go for Republicans, and I think they will."

First of all, you'll see me apologize if you watch the video, when I shouldn't have: I actually never said Dems should "ram things through." But I did identify those words as a tired GOP talking point, which Halperin knows because he often produces them, however inadvertently.

Then Halperin asked me directly: "Would you like to see [Obama] work with Republicans -- on education, financial reform, on economic development -- or not?"

"You know what, Mark?" I answered. "Actually? 'Not.' Not for the sake of just working with Republicans." I explained how Obama worked hard to craft a bipartisan stimulus bill that was smaller than many Democrats wanted, and that was low on funding for infrastructure building programs as well as support for cities and states that were shedding cops, firefighters and teachers at the same time the stimulus money was coming down. Keeping people employed is an excellent unemployment program, I noted, but thanks to the president's efforts to win Republican votes, the Obama stimulus was too small to do more than a little of that.

I also told Halperin I hoped Republicans like Massachusetts Sen. Scott Brown would make good on campaign promises to work with Democrats. I think such things are possible. But it's on Republicans, not Democrats, to make a move on bipartisan cooperation – and I'm not seeing it. How do you compromise with the pissy Sen. John McCain, who grouchily said, after the healthcare reform bill passed, that he and his party mates won't cooperate ever again (as though they'd cooperated with Obama before). Hilarious.

I don't expect that, but will acknowledge  a couple of possible opening. Today Tennessee's Bob Corker criticized his party for failing to find a way to work with Democrats on Wall Street regulatory reform. Much more cynically, but it was still interesting, Iowa Sen. Chuck Grassley Wednesday had the nerve to praise at least parts of the healthcare reform bill, and even take credit for a provision that better regulated charity hospitals. Remember all those GOP hypocrites who voted against the stimulus but then took credit for the spending in their districts? Keep watching, we might see the same thing with this unfairly and irresponsibly maligned bill.

Anyway, here's Halperin's and my "Hardball" debate. It heats up in the second half. Tell me what you think.