Who's afraid of the word "feminism"?

The publisher of a women's music magazine trashes "the f word" as outdated, but she's the one who's out of touch 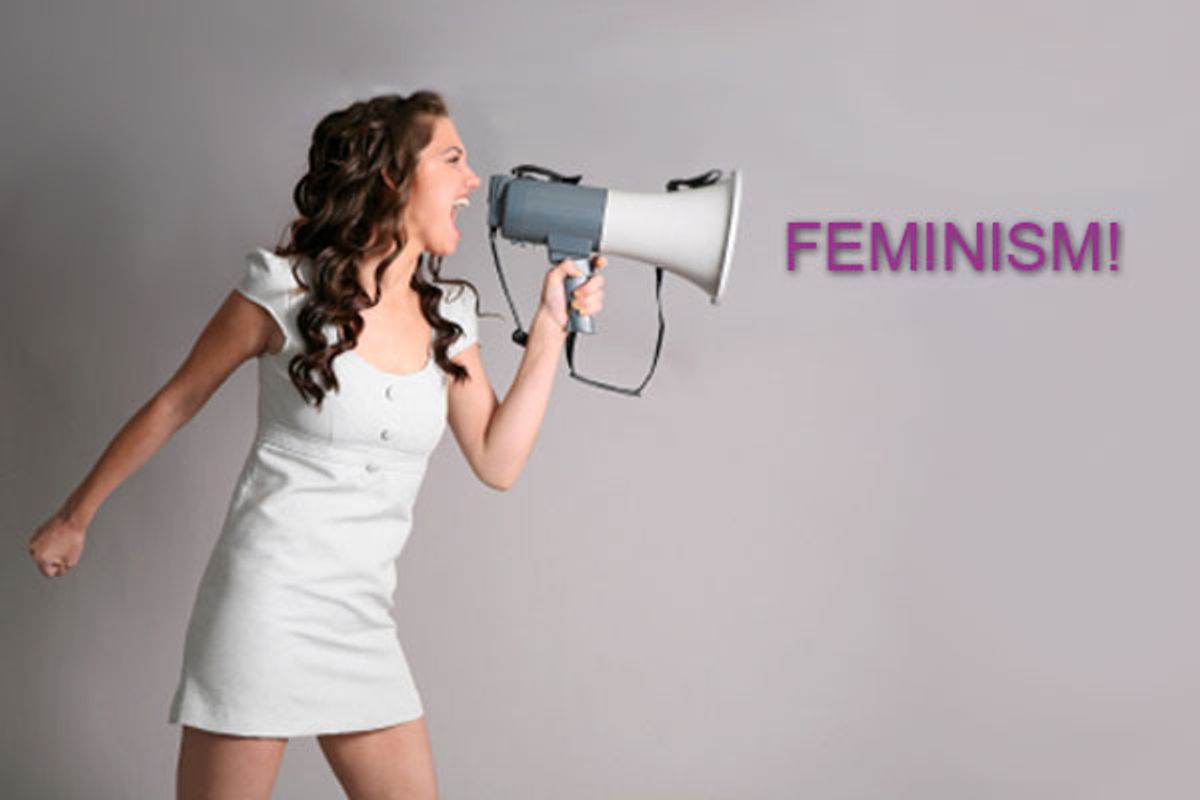 This morning, when music critic and "The Girls Guide to Rocking" author Jessica Hopper tweeted, "Venus' new publisher sez feminism 'isn't relevant' to the new version of the mag, hires ed from Martha Stewart," I wanted to believe she was joking. But then I followed her link to a Chicago Reader article that confirmed it: The magazine that began in 1995 as a one-woman, college-dorm-room project with the mission of covering "women in music, art, film, fashion, and DIY culture because not a lot of other publications do" is so over feminism.

Don't blame Venus' founder, Amy Schroeder: Although she doesn't object to this new direction, she's been out of the picture since September 2008, having stayed on as editor after selling the magazine in 2006. Now, Venus is once again under new ownership, and its new publisher is 47-year-old business consultant and former MCI V.P. Sarah Beardsley. (Full disclosure: I contributed to the last issue before the magazine changed hands -- but, in case you're wondering, don't anticipate writing for it again.) When asked for her take on feminism, Beardsley tells the Reader's Michael Miner, "That's such a word fraught with interpretation and meaning." (Oh, jeez, anything but meaning!) "We don't use that particular F word around here. It just doesn't seem relevant." According to Beardsley, feminism is "an old-fashioned concept" -- this from a woman who, Miner points out, is still 13 years older than Schroeder and well outside Venus' 18-to-34-year-old demographic.

This is the detail that caught the eyes of the Broadsheet e-mail list: That Beardsley thinks feminism is irrelevant to young women. As Rebecca Traister (who has just finished writing a book about feminism) wrote in an e-mail, "The people who are the most afraid of the word 'feminism' are actually older women -- and by that I mean women in their thirties and forties and early fifties -- who were so forged by backlash bias that they still think of feminism as a scary word. People who have almost no connection to the blogosphere or to the youthful world in which feminism is bandied about like crazy (albeit with different ideology and spirit than it used to be, sure)." As Traister observes, feminism is all over the Internet, on popular blogs like Jezebel, Feministing, Double X and, of course, Broadsheet. It's on TV and in the movies, where celebrities who identify as feminists include not only the usual suspects (Fey! Poehler! Sedaris!) but also dudes like Andy Samberg and Adrien Grenier and cover girls like Katherine Heigl and Eliza Dushku. It literally has never been easier (or more fun) for teens and 20-somethings to access feminist media.

And yet, it's not difficult to understand why Beardsley may not see that. It's true that reading Jezebel (whose tag line "celebrity, sex, fashion for women," it should be noted, is not an explicit statement of politics) or watching "30 Rock" doesn't look much like going to a protest march or volunteering at Planned Parenthood. But they all represent potentially meaningful encounters with feminist consciousness and prove that young women are anything but allergic to it.

That's why it seems foolish for Beardsley to waste so much breath distancing herself from "the F word." Like Jezebel, Broadsheet and any number of other women-oriented publications, Venus' feminism was always somewhat implicit. The magazine didn't hit you over the head with "girl power!" or "fight the patriarchy" -- it profiled women (and even a few men) who were doing interesting things in music and the arts. I don't imagine that, unless Venus plans to entirely overhaul its content (in which case maybe it should also look into changing its name and demographic and -- why not? -- start courting Axe body spray ads), its focus will change much.

So, if the magazine isn't doing a total 180, then it must be the perception of Venus as a feminist publication that Beardsley wants to shake. How will that work out for her? As Kate Harding puts it, the thinking goes something like this: "Well, there's obviously a pretty big market out there that either self-identifies as feminist or isn't offended by the implication that they might, so talking about powerful women and stuff is good -- but just think how much BIGGER the market could be if we did the same basic stuff without using that off-putting F-word!" Except, as Salon TV critic Heather Havrilesky points out, it would be hard to do that without rendering Venus somewhat meaningless: "The active distancing feels like the product of a larger cultural/economic initiative to make sure to attract EVERYONE to your product, even when that only renders it toothless and devoid of charm or a strong voice. It's interesting how economic pressures can create this constant search for broad appeal, even in the very corners that are attractive because they represent the antithesis of that."

With that in mind, it's hard not to wonder: By repackaging a pro-woman magazine as something much blander and more common (and, in the process, alienating the hell out of its loyal supporters) because she believes that feminism is "old-fashioned," will Beardsley end up with any audience at all?