The drama of flying

This is your captain speaking: Telling you what you're flying over isn't useless chatter! Plus: Change is coming 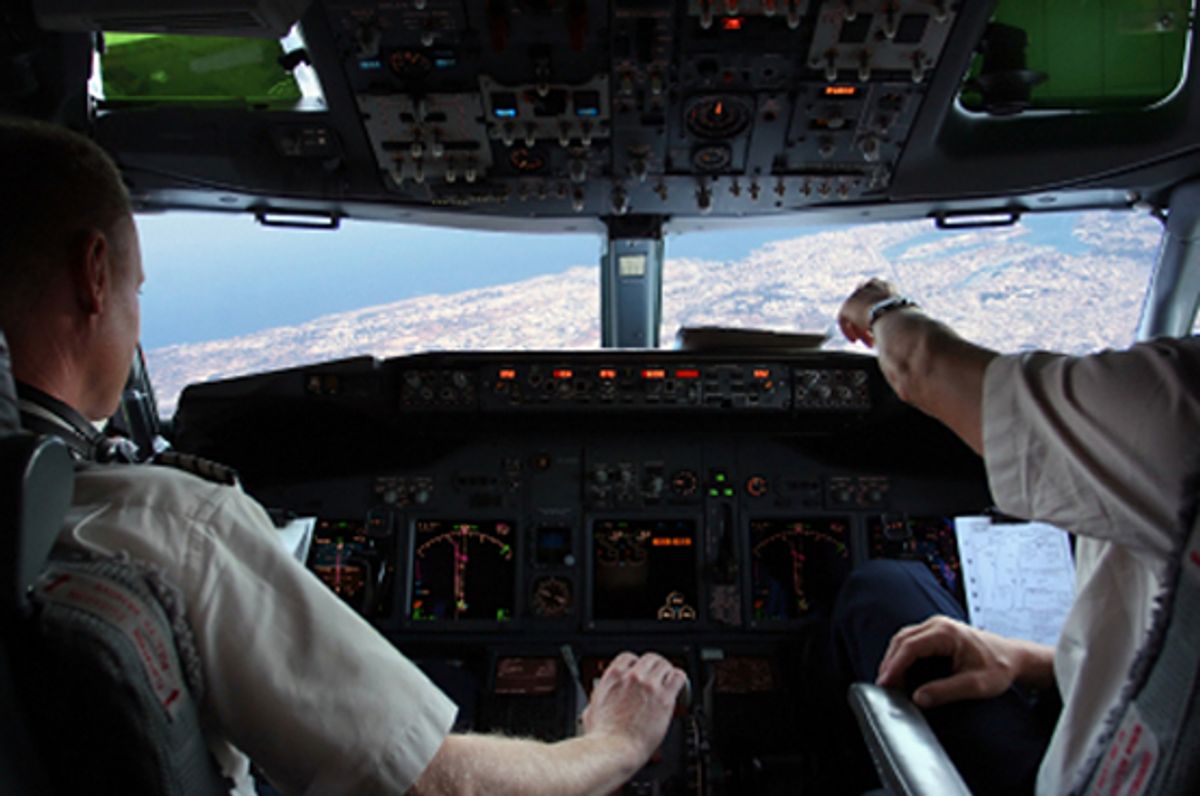 Before we get going, some important news: Effective today, Ask the Pilot is switching to a new format and a new schedule.

The column will change from a once-weekly article to a more fluid, blog-style feature. This is in better keeping with the rest of Salon's content and should result in a column that is more conversational, more accessible, more interactive and more fun.

The postings will be shorter, but more frequent, with one or more updates during the week. I'll cover breaking news and incidents, take on reader-submitted questions, address your comments and complaints, etc.

It'll be all the things you've been reading in my columns for the past eight years -- including the personal stories, riffs on music and travel, etc. -- but instead of getting it all in one lump, it'll be parsed out. (By the way, it took all I could muster to type the word "blog" without succumbing to pangs of shame. Is there an uglier word in the language, and does a writer lose something in the transition from columnist to mere blogger?)

I suppose it won't be perfect out of the box, so Salon and I welcome your comments and suggestions on how this new format should look, work and feel.

In other news, Steve Hartman, my cult affairs coordinator, asks me to remind you that he's looking for additional friends at his Ask the Pilot fan page on Facebook.

Also, I'm happy to announce that Ask the Pilot T-shirts are finally for sale. Click over to my home page for specs and pricing. You ain't in the Pilot posse if you ain't sporting the colors. Show your allegiance at work or at play; at the airport and on the plane (though you might want to cover up going through the TSA checkpoint).

And now, the first installment of the all-new Ask the Pilot...

Tough crowd. Last week I showed you a transcript of my standard "welcome aboard" announcement made from the cockpit before takeoff. I was surprised at how many people gave it a rousing thumbs-down. "Your model announcement was full of the same 'ornamental gibberish' and redundant phrases that you criticized in the article," said one reader. Another complained of its "trite jargon."

I beg to differ. The speech has a few affectations tossed in to help smooth it out a little, but if that's your idea of gibberish or trite jargon, then I can only imagine what you think of the boilerplate babble that other crew members make. Heck, I'm at least trying. And remember, it's an announcement, not a written speech, and certain information needs a little setup.

It was the routing portion that many of you found excessive.

Our flying time to São Paulo will be nine hours and 20 minutes. Our route of flight, for those of you interested, will take us slightly west of Bermuda, then down across the Caribbean, passing just east of the island of Trinidad. We'll make landfall again near Georgetown, Guyana, and those of you on the right side should catch a nice view of Venezuela's Orinoco River Delta. Eventually we'll cross the Amazon River overhead the city of Santarém; then southbound passing over Brasilia before beginning our descent into São Paulo. Weather on arrival should be hazy skies and a temperature of around 90 degrees Fahrenheit -- about 32 Celsius.

Said one reader, "Most of your written speech was aimed at flight junkies ... I've never once cared about my routing."

Actually it isn't aimed at "flight junkies" at all. It is aimed at the typical traveler who -- call me crazy -- I presume to be curious about the specifics of his or her voyage. Especially when that voyage passes above places as exciting as the Amazon River. Who wouldn't want to know that? It's the Amazon!

What I'm hearing is that people have lost all appreciation for the drama of flying. OK, a 60-minute hop from Chicago to Omaha, that's one thing. But flying to Brazil? Or to Hong Kong, or Cape Town, or Mumbai? These are journeys that once took months in a sailing ship. Have we entirely forgotten that? On one hand this is the realization, perhaps, of a fully evolved technology, whereby flying itself has become secondary to the experience in whole. Progress, one way or the other, mandates that the extraordinary become the ordinary. OK, I get that. But don't we lose valuable perspective on our own capabilities and triumphs when we begin to equate the commonplace, more or less by definition, with the tedious? I find it distressing, and frankly a bit mind-boggling, that people can be traveling halfway around the world and honestly not care which way they are going or what they are passing over.

For what it's worth, my feeling is that a long-haul flight generally deserves a longer spiel. On a shorter hop I would not get so specific and the speech would be brief. But on a nine-hour intercontinental flight, it's part of the whole, for lack of a better term, event. This is being romantic to an extent, but it's also a common-sense appraisal of the sheer magnitude of being able to throw down a few hundred dollars, hop into a jetliner, and travel thousands of miles to faraway continents. If you can't appreciate that, what can you appreciate?

Once aloft I seldom make announcements, by the way. Even my turbulence P.A. is pretty terse. I'll give it more oomph if the air is especially bumpy or if things look rough ahead, but for garden-variety chop it's very simple:

By contrast, most calls for seat belts are rattled off in a mumbly, rapid-fire drawl that nobody can even hear:

Who said what now?

And by the way, don't think for a moment that U.S. carriers own a monopoly on useless chatter. One reader informs me that while flying on Swiss International during the flu pandemic, cabin attendants announced that if passengers were feeling unwell they should avoid flying.

Of course this announcement was made after takeoff.

When I flew Royal Air Maroc to Casablanca 10 years ago, the safety briefing included a warning from flight attendants that "sleeping on the floor would not be permitted." Judging from the collective groan heard throughout the cabin, this was a break from tradition.