An anti-government militant -- on disability

Activist Mike Vanderboegh urged his fellow extremists to break Democrats' windows. But he gets "Marxist" welfare 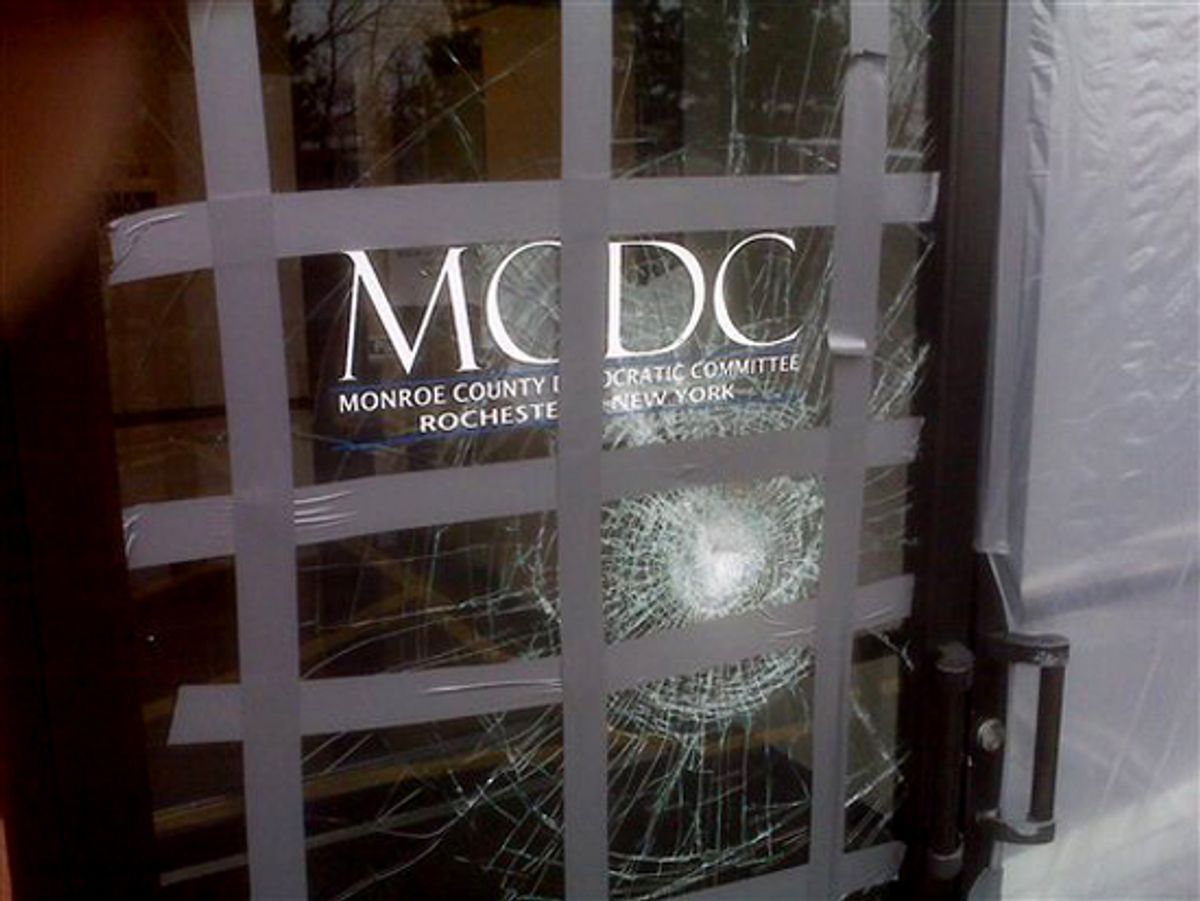 This picture provided on Wednesday, March 24, 2010 by the Monroe County Democratic Committee in Rochester, N.Y. shows damage to their office after a glass door was struck with a brick with a note reading "Exremism in Defense of Liberty Is no Vice" sometime from late Saturday, March 20, 2010 or Sunday, March 21, 2010. Bricks have been hurled through Democrats' windows, a propane line was cut at the home of a congressman's brother and lawmakers who voted for a federal health care bill have received phone threats in the days before and after passage of the sweeping legislation. (AP Photo/Monroe County Democratic Committee) (AP)
--

Mike Vanderboegh is the far-right activist from Alabama who gained sudden notoriety when he posted a message this week urging his fellow extremists to smash the windows of Democratic politicians to protest healthcare reform -- a wingnut Kristallnacht. In a revealing profile in today's Washington Post, Vanderboegh explains that throwing rocks was merely meant to warn of an impending "civil war" against Washington's infringements on poor honest folk like him.

He assured the Post that untold numbers of alienated Americans "are not only willing to resist this law to the very end of their lives, but are armed and are capable of making such resistance possible and perhaps even initiating a civil war." So far there is no evidence that Vanderboegh followed his own advice, which might have entailed a personal risk for him, after all.

As a longtime "militia" organizer and Minuteman border patroller, he has advocated violence for many years without consequence. In a 2005 report by the Southern Poverty Law Center, Vanderboegh was identified as a hard-line nativist, obsessed with the notion of instigating a civil war in the United States.

Back in the mid-1990s, he wrote a document titled "Strategy and Tactics for a Militia Civil War" in which he discussed the utility of snipers using "violence carefully targeted and clearly defensive: war criminals, secret policemen, rats ..." SPLC director Mark Potok set Vanderboegh in the current context of "Patriot" extremism on NPR's "Fresh Air" yesterday.

There is often a darkly comical aspect to these sinister fringe figures. While Vanderboegh claims to be a militant "libertarian," a tribune of the oppressed white middle class, and a student of Friedrich von Hayek, he appears to be an ordinary welfare case. Claiming to be too ill for gainful employment, he apparently spends most of his time stirring up violence, with a nice federal subsidy.

According to the Post, he lives off his wife, who works at a forklift company -- and also gets a monthly disability check from our "Marxist" federal government.