Why it's OK to love Styx

They've been slagged as embarrassing, over-earnest, everything wrong with '70s music. Forget that: This band rules 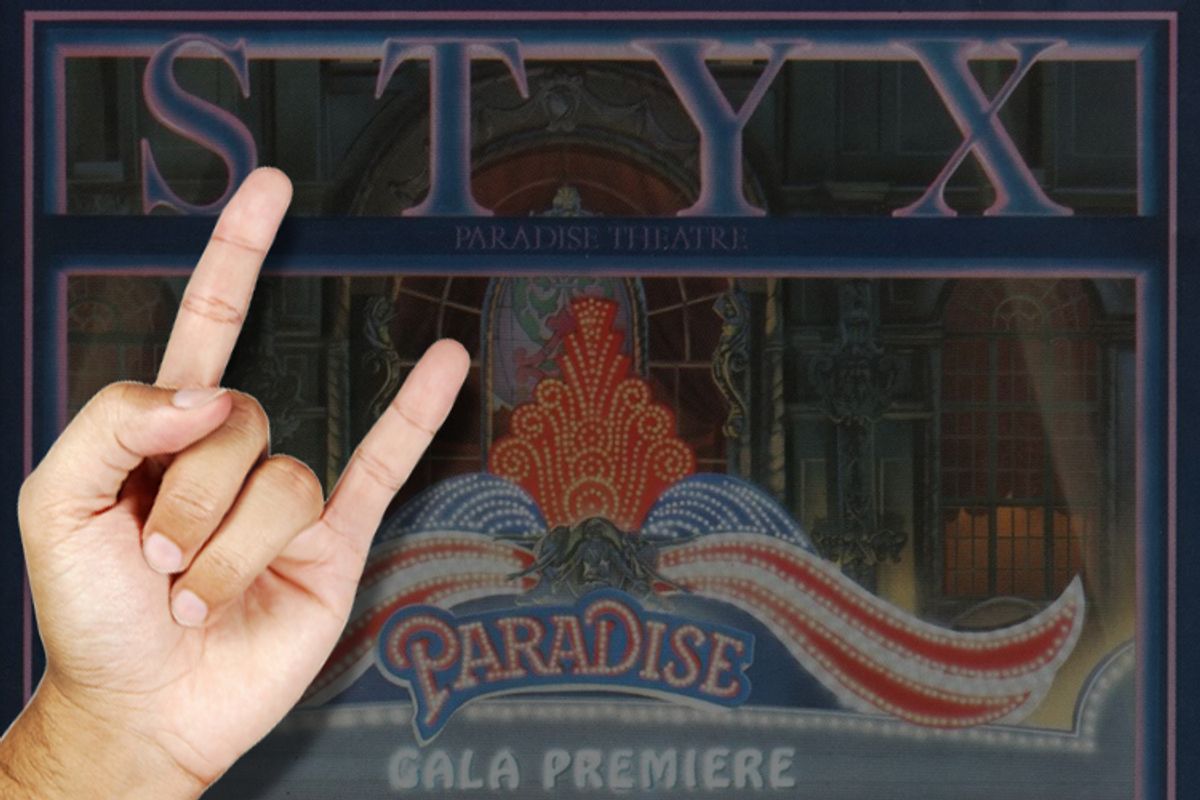 I confess that I loved Styx in the past, and I still love Styx and not ironically either. There is no sin in the realm of taste. This will come as a shock to a critical establishment that prides itself on haughty judgment.

But you can't tell someone his or her ears are wrong. You can't rescind the pleasure they derive from a particular piece of music. You can certainly deride that pleasure. If we were to meet and you were to break into the refrain of "Renegade," for instance, or "Come Sail Away," I would feel embarrassed. I might even, for the sake of camaraderie, go along with the gag. Ha-ha-ha. Yeah, Styx: what was I thinking? But that is quite different from what my body experiences when I listen to Styx. And in particular, when I listen to what I will now call -- with no alcoholic intervention -- the Styx masterpiece, "Paradise Theater."

"PT" was released in the winter of 1981, my freshman year in high school. It documents the demise of Chicago's Paradise Theater, which is a metaphor for the demise of America's civic culture, which is deep, man. So it's a concept album, or half a concept album, because only Dennis DeYoung was committed to the concept and he was the pianist. The rest of the band almost certainly thought DeYoung was a fag.

That I memorized the album, word for word, will go without saying. That I used impromptu recitations to score titty privileges at Jewish summer camp also can be assumed. I was especially taken by the rousing power ballad "The Best of Times." I loved everything about it: the Elton Johnish piano intro, DeYoung's histrionic vibrato, his shameless appropriation of Dickens, the marching cadence, the chorus with its richly harmonized coda ("These are the best ... of times"), Tommy Shaw's Harrisonesque solo -- a solo I cannot hear without picturing Shaw in the bright green jumpsuit he wore for the concert video: the Jolly Green Giant's tiny catamite lover. I dug every song on "PT." The pulsing anthems ("Too Much Time on My Hands"), the weepers ("She Cares"), the obligatory coke addiction song ("Snowblind"), even DeYoung's corny piano outro. I bought the whole enchilada.

America was in decline, at least my version of America, and Styx got that. It chewed certain big ideas -- dying cities, suburban atomization, a lost and shining past -- into bite-size bromides, then set them to melodies that fell somewhere between the Monkees and Foreigner. It might be said that they lamented the homogenization of American culture while, in fact, homogenizing American culture. Or it might be said (if you were me) that they nailed the prevailing zeitgeist, the fraudulent nostalgia and grandiose self-regard of the Reagan era, the synthesized stunts and fluorescent, shoulder-padded duds. They made the listener feel good about everything, including the things one should feel bad about.

And let me take this a step further: if you want to know what people were thinking and feeling and dreaming in 1981, if you're curious about the emotional tenor of that particular slice of our history, "PT" is much more useful than any of the enduring LPs of that time, "Sandinista!" by the Clash, for instance, or U2's "October." That's what makes it a classic. I still feel good when I listen to "Paradise Theater." I feel I have, in some obscure manner, grappled with civilization and its discontents. I have registered my protest to the unkind march of time and danced the robot while doing so.

Critics never had much patience for Styx. They were the apotheosis of late 70s prog-pop mediocrity, and so forth. Nor has history been kind. Styx has become the mullet of bands. The band's real crime is not that they were too eager to please -- though they were certainly that -- but that they were too effective at pleasing. They got people to sing along. We all have a Styx in our closet, at least one. (Supertramp, anyone? Hootie & the Blowfish?) They're reminders of who we used to be, as surely as the feathered hair and Lycra bodysuits that haunt our old photo albums.

But my larger point is that there's no angle in hating on a particular song or band or genre. Our species is adaptable. That's our evolutionary trump card. If the human ear is given a chance, not cowed into snobbery, it can find rewards in almost any form of music. I think here of a line by Robert Christgau, who for many years represented the gold standard of rock critic snark. Assessing the work of Emerson, Lake & Palmer's "Brain Salad Surgery," he wrote, "The sound is so crystalline you can hear the gism as it drips off the microphone." The line is funny, an appropriate epitaph for a trio that was Spinal Tappish in its pretense. But when I think about that album what I remember is sitting around with my pal Dale McCourt, listening to the endless onanistic glissandos and howled couplets of "Karn Evil 9" ("Welcome back my friends, to the show that never ends!"). We loved that song. And there's no arguing with joy.