Why are bad action movies obsessed with underground cage fighting? And bad metal? And nursing students? 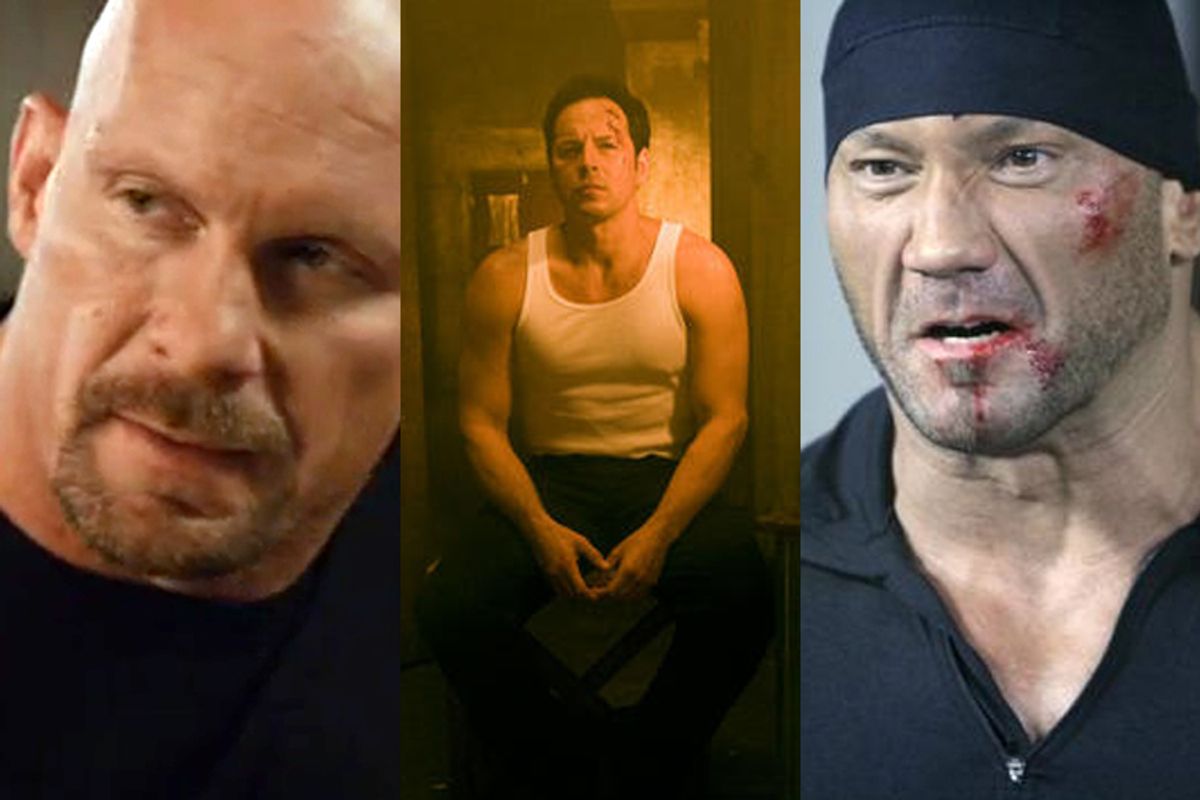 Steve Austin in "Damage," Hector Echavarria in "Unrivaled" and Dave Batista in "Wrong Side of Town."
--

The producers of straight-to-DVD movies are obsessed with the idea of underground fighting leagues. I'm not saying that these things have never happened, but the sheer volume of these movies being cranked out would lead a guy to believe that bare-knuckled brawls are taking place in almost every square foot of seedy commercial real estate in the country at all times. But today's pit-fighting epic needs more than the sight of tattooed tough guys beating each other into bloody slag to the soundtrack of bad, overproduced metal. In order to survive in the cutthroat world of those Redbox video rental bins you find in supermarkets, you gotta have gimmicks.

"Damage," just hitting the video-store shelves from Fox, contains the pleasures of seeing "Stone Cold" Steve Austin fighting for his life in an abandoned shipyard while surrounded by starving dogs on chains. When one of the fighters gets too close to the pooches, he gets mauled before being dragged back into the slugfest by his opponent. It's kind of like the ghetto version of the tiger scene in "Gladiator." Stone Cold also fights on top of semitrailers and in drained Olympic-size swimming pools, where the diving board becomes another blunt object to pummel a guy with. The cage-fighting flick hasn't quite gone full sci fi yet, but you know that's just around the corner.

Austin, a former World Wrestling Entertainment champion best known for pouring beer all over himself, is John Brickner, a recently paroled con who served four and a half years for manslaughter. "Taking a human life with your own two hands is the most soul-crushing thing a man can do," Austin informs us through off-screen narration. This lets us know that he's a reluctant warrior this time around. Gone is the balls-out revelry that he used to display after giving the "Stone Cold Stunner" to Vince McMahon on so many installments of Monday Night RAW around 10 years ago. In "Damage," Austin has only two dramatic modes: sullen and more sullen.

The plot of "Damage" does more jiujitsu than we see during any of the movie's fight scenes. The widow of the man that Brickner killed wrote to the parole board to help Brickner win his early release. Now, that's strange enough, but it gets weirder when we find out that the widow has no one else to turn to but the murderer (or manslaughterer) of her dead husband to help her raise the $250K needed for her daughter's vital heart operation. Brickner, a Stone Cold with a heart of gold, is guilted into getting the widow the cash, but the only way a bald thug like him can lay his mitts on that kind of scratch is to pound guys into oozing husks in one of those underground fight leagues these movies keep telling us about. Thank God the healthcare bill just passed so this sort of thing won't happen ever again.

Some of the best scenes in "Damage" don't take place in its makeshift coliseums housed in the ruins of old factories, but during Brickner's scenes with an indifferent parole officer. "You piss clean, see you next week," is all the P.O. can bother to say, no matter what kind of scary shit Brickner says about his new gig in the underground fight scene. The movie could have done with more of this and less of the melodrama that was already cornball during the original Great Depression. Linda Vandervoot ("V," "Smallville"), an actress who looks way too much like Charlize Theron, plays the failed nurse turned barmaid love interest. The women in cage-fighting movies are always failed nurses/fallen angels. Walton Goggins marks his time at Fox in between "The Shield" and "Justified" as the shifty fight promoter (as if there were ever any other kind), and adds yet another cracker hustler to his oeuvre. Goggins' presence elevates "Damage" to being a better-than-average cage-fighting epic, for whatever that's worth.

"Damage" gives us a pro wrestler as a cage fighter, while "Unrivaled" has ultimate fighters playing themselves, which isn't as great an idea as it sounds.

"Unrivaled" is a mixed martial arts "Rocky" story with the montage usage cranked way beyond anything that Sergei Eisenstein ever imagined possible. For most of its 108-minute runtime, the movie is nothing more than a series of music videos with connecting clichés that stand in for plot. Hector Echavarria ("Never Surrender"), an actor who is rapidly becoming the Lance Henriksen of straight-to-DVD MMA movies, plays Ringo Duran, the kind of down-and-out pug that we've seen a million times before, most recently with Mickey Rourke's performance in "The Wrestler." However, Echavarria's Duran has it a lot harder than Rourke's Randy "The Ram" Robinson. Where Robinson enjoyed a nice outing to a strip joint following a grueling barbed-wire match, Duran actually works in the strip club. Fortunately for him, the matriarch of the exotic dancers is another one of those nursing-school dropouts who can cure his aches and pains with her Mr. Miyagi-like chiropractic techniques.

Everyone in "Unrivaled" is a poet and they don't know it, making me wonder if the movie isn't really about the build-up to a poetry slam instead of an aging fighter's comeback against impossible odds. The grizzled old trainer, dispensing stage wisdom that comes out of a can, uses the word "sometimes" a lot: "Sometimes a fighter brings his own fight. Other times you gotta bring the fight to the fighters. Two wild animals locked up in a cage together — sometimes that can make a fighter more hungry."

And just when you think that the Litquake is over, former UFC light heavyweight champ Rashad "Sugar" Evans (playing the Apollo Creed character here) gets in the act by saying, "If I was a fifth, we'd all be drunk right now." Not to be outdone, ultimate fighter Keith "The Dean of Mean" Jardine adds this nugget of profundity: "You can't fix the game, the game fixes you." There's still more, but to recount it would be more torturous than a winding guillotine choke.

In addition to Evans and Jardine, ultimate fighters Forest Griffen and Nate "The Great" Marquandt are also served up during Duran's comeback. Even though Duran is portrayed as a totally broken-down fighter, everyone he faces uses loaded gloves and foreign objects to add even more drama and improbability. On the plus side, "Unrivaled" does deliver lots of the digital blood splatters that are all the rage these days, and its strip-joint setting makes for several long takes of bare breasts. Also, every time a ring girl walks across the screen, the camera zooms right in on her ass, showing that director Warren P. Sonada at least knows his target audience.

When pro wrestlers aren't playing mixed martial artists, the other role left open to them is that of the current or former Special Forces badass whose spouse or daughter is kidnapped by either a criminal mastermind or terrorists. If you're playing the female lead opposite a pro wrestler, you're either going to be cast as a nursing-school dropout or an abducted wife or daughter, or sometimes an abducted loved one who also happens to be a nursing-school dropout. Please reference the collected filmography of John Cena for further review of this pattern.

In "Wrong Side of Town," pro wrestler and marijuana advocate Rob Van Dam (no relation to Jean-Claude Van Damme) is a former Navy SEAL. True to form, his daughter gets kidnapped by mobbed-up goons, but not until near the end of the picture. It was almost as if they forgot about the abduction rule until more than half the movie was already in the can. Usually, the abduction of a loved one gives the pro wrestler a chance to look anguished for several frames before going it alone. In Van Dam's case, he was probably too stoned during filming to get that pained-expression thing down. I mean what do you expect from a guy who frequently wrestles with a pot leaf emblazoned across his spandex tights?

Van Dam and his wife Dawn (Lara Grice) are persuaded by the yuppie couple next door to go to a hot new nightclub in New Orleans. As if to confirm every gated-community dweller's worst fears of the big bad city, the two couples soon find themselves being chased by Ja Rule and an Impala full of gangbangers as well as the those vicious punk-rocker gangs that exist only in bad action movies. It's all kind of like "The Warriors," only dumber.

Also along for the ride is current WWE champ Dave "The Animal" Bautista, a man-mountain composed entirely of muscles, tats and veins, who barely appears in the picture at all despite being front and center on the box art. You know, it's never a good thing when you say that a movie could really use more of Dave Bautista, but this can be definitely be said here. My poor girlfriend, who has to endure so many of these straight-to-DVD offerings, pointed out that "Wrong Side of Town" makes "The Marine 2" look like "Casablanca." Don't play it again, Sam.

NOTE: I'm going to WrestleMania in Phoenix this weekend — plus, I've joined the 21st century. (Hopefully I won't run into Dave Bautista!) Follow my wise-ass remarks about all the hype and buildup to Vince McMahon's annual cavalcade of body slams on my newly launched Twitter feed at twitter.com/bob_calhoun.