"DIY U": The end of university prestige 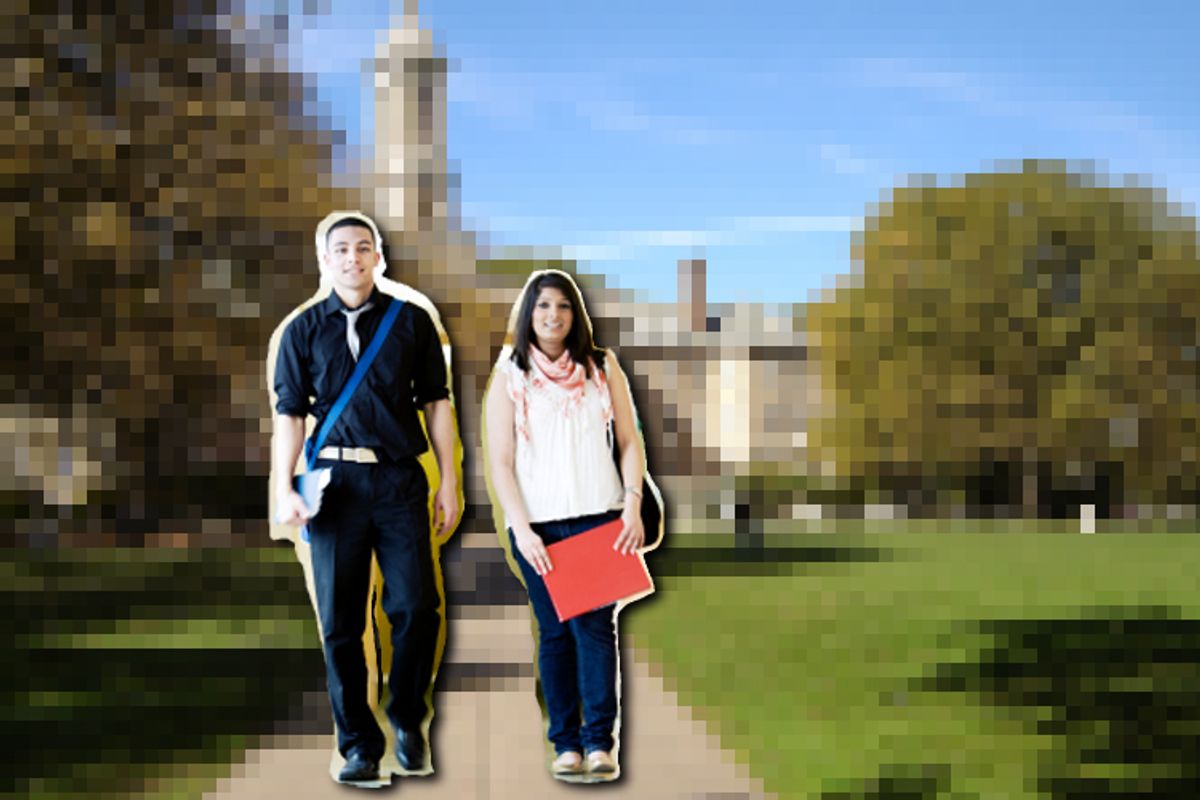 Higher education in this country is in a state of crisis. Nearly nine out of 10 American high school seniors say they want to go to college. Yet almost half of U.S. college students drop out, outstanding student loan debt exceeds $730 billion, and tuition fees rose 248 percent between 1990 and 2008, more than any other major commodity or service.

As Anya Kamenetz suggests in "DIY U: Edupunks, Edupreneurs, and the Coming Transformation of Higher Education," these problems, and the fact that students and teachers are increasingly venturing beyond campus walls to gather and share information, spell trouble for the future of the conventional university. In her book, Kamenetz, the author of “Generation Debt” and a staff writer for Fast Company magazine, argues that a decentralized college experience — in which the least effective parts of college life are replaced by technology, social media and self-directed learning — can limit dropout rates and reverse the devastating cost spiral.

Kamenetz doesn’t advocate leaving the university behind, but she envisions a future where the 80 percent of American college students who attend non-selective schools (mainstream public universities and community colleges) create their own personalized course of study. Some American universities are already making classes available for free online, and using blogs, YouTube, Facebook and, yes, Twitter, to move toward this new model for higher education.

Salon recently spoke with Anya Kamenetz over the phone about the origins of our massive student loan debt, her own Yale education, and why we should look to England’s educational system for guidance.

Why did you decide to write a book about reforming higher education?

In 2005 I wrote "Generation Debt," which is about the increase in student aid resulting from the growth of college classes. I noticed this underlying tendency to try to solve the problem by throwing more money at it. But it’s like healthcare: Despite the increase in basic costs, spending more and more money on it won’t make it more affordable for people. Then I started working at Fast Company, which operates at the intersection of innovation, policy and politics. I began investigating the area of higher education as an information industry that was possibly ripe for the kind of disruption we’ve seen in other information industries.

You argue for a movement toward something called "DIY U." What is it?

I define it as the mentality that there’s another way to provide the benefits of higher education to the people who need it. It’s an idea that puts the learner at the center. Rather than the game being, "How do you get into the most exclusive institution possible?" the idea is that you as a learner are identifying your own goals and assembling experiences that will be the most valuable for you to achieve those goals.

How did college tuition costs get so out of control?

On a broad policy historical level, what we have now is an erosion from the high-water mark of the early 1970s. There was a short period of time — from the postwar era with the GI Bill to the early '70s — [in which] there seemed to be unlimited rounds of investment from the federal government and the state into mass higher education. It was seen as good economic policy, from a national defense and security perspective, and with the Civil Rights Act, there were more and more people — women, minorities — who wanted access to opportunity. College seemed like a way to allow them to prove themselves instead of unleashing them on the job market.

Then the economy turned upside down. There was a political backlash against college students, fueled in large part by the campus unrest in the '60s, and it was no longer so popular to support students. So states started withdrawing their support, and colleges started practicing cost shifting. States came down on colleges as being fat and happy and full of liberal professors, and colleges put the cost burden on families, and families took on more student loans. As a result, you get this credit bubble effect, similar to what happened recently with mortgages: There’s so much debt available, and so much free money for colleges, that parents and families become less sensitive to price increases, and there’s no political outcry at the state level.

As you write in the book, colleges can increase their tuition simply to appear more prestigious on the U.S. News & World Report rankings.

Right. The problem is, we don’t really know what happens inside a college classroom. We have the SAT, which measures high school performance more or less, but there are no national standards for higher education. So the U.S. News & World Report rankings depend on exclusivity and spending. Colleges become more prestigious if they accept fewer students and spend more money on them, as opposed to raising their chances to succeed, improving their self-esteem, or making them more efficient.

But competency-based online schools like the Western Governors University, which awards degrees based on what students have learned, don’t have the same reputation as traditional schools like Amherst.

In the future, I don’t think it’ll go back to the old model, where colleges have this brand name that everyone respects. We still use college as shorthand for prestige, but eventually that should be just one marker among many. You’re not going to be applying for jobs on the strength of your WGU diploma — you’re going to have to rely more on your assessments in the field. But grads of WGU have found they can satisfy employers by showing them what they’ve done, more than where they’ve studied.

I was very good at traditional school and college, where I graduated with honors. All the time while absorbing literature and Russian, I was also learning the meta-skills of how to please my teachers and how to stay away from any classes that might be too challenging or outside my comfort zone. I made an attempt to design my own major around literature and psycholinguistics, but Yale threw up a lot of barriers to that.

My most relevant learning experiences took place outside the classroom, editing my student magazine and working as an intern at several different publications. Out in the real world I was challenged to the max, pulling far more all-nighters than I did for my papers. I was always a bookworm, so I had to develop new ways of dealing with people, whether sources, fellow writers or editors, and gathering information from being on the scene. I actually cut back on my class load my senior year so I could commute to New York three days a week to intern at the Village Voice, which is pretty rare among Ivy Leaguers. But it turned out great: I found great mentors there, and I was writing a column for the Voice just a couple years later.

Is there another country we should be modeling our higher education after?

There’s no perfect model. Every country in the world is grappling with the unprecedented demand for higher education. In the developing world, there are 10 or 20 times as many people who want a degree than there is capacity. The developed countries have the same problems as we do: The costs are going up, the institutions are somewhat calcified and insulated from the job market.

I did, however, keep coming across innovative approaches in England. The U.K. is very interesting since it has an economy and standard of living similar to ours, but until recently, they had a much smaller percentage of people going through higher education. Today, they have many more entrance points and a highly developed set of vocational programs. Up until the age of 25, you can access a variety of resources that set you up with apprenticeships and internships. England’s Open University, which goes back to the 1960s, when they had classes on television, is currently a leader in open courseware.

Does open courseware mean we’ll be getting rid of professors?

From the earliest days of the academy, it’s been an ideal to share knowledge openly — that scholars aren’t producing knowledge primarily for personal gain but to share it with the world. And it’s been a decade since MIT started their OpenCourseWare project, putting all their courses online for free. The biggest advocates of these changes tend to be humanities professors and graduate students fascinated by the implications of social media, by how people communicate in the media world. But it’s important to emphasize that these repositories are materials. It’s not that by using OpenCourseWare you’re replicating an MIT experience. You’re putting the raw material in someone’s hands so that, by working alongside peers or a teacher of some sort, you can absorb this knowledge. It’s the best possible use of the Web.

More and more people are applying to trade schools, where they can learn practical skills that won’t be offshored. Can students really learn these trades online?

This has been a big question for me, and my major answer is hybridization. Vocational schools are actually a good example of the hybrid model, because when you’re in the classroom you’re actually engaging with your hands. On WikiEducator, for example, they have a series of videos on chainsaw maintenance. But before you become a chainsaw maintainer, you probably want to find a real person who knows how to use a chainsaw. Offline and online aren’t isolated experiences.

A whole DIY movement — exemplified by sites like Boing Boing — comes from people going online to learn about something, going offline and trying it out, and then going back online to report what they did.