"Contested Will: Who Wrote Shakespeare?" 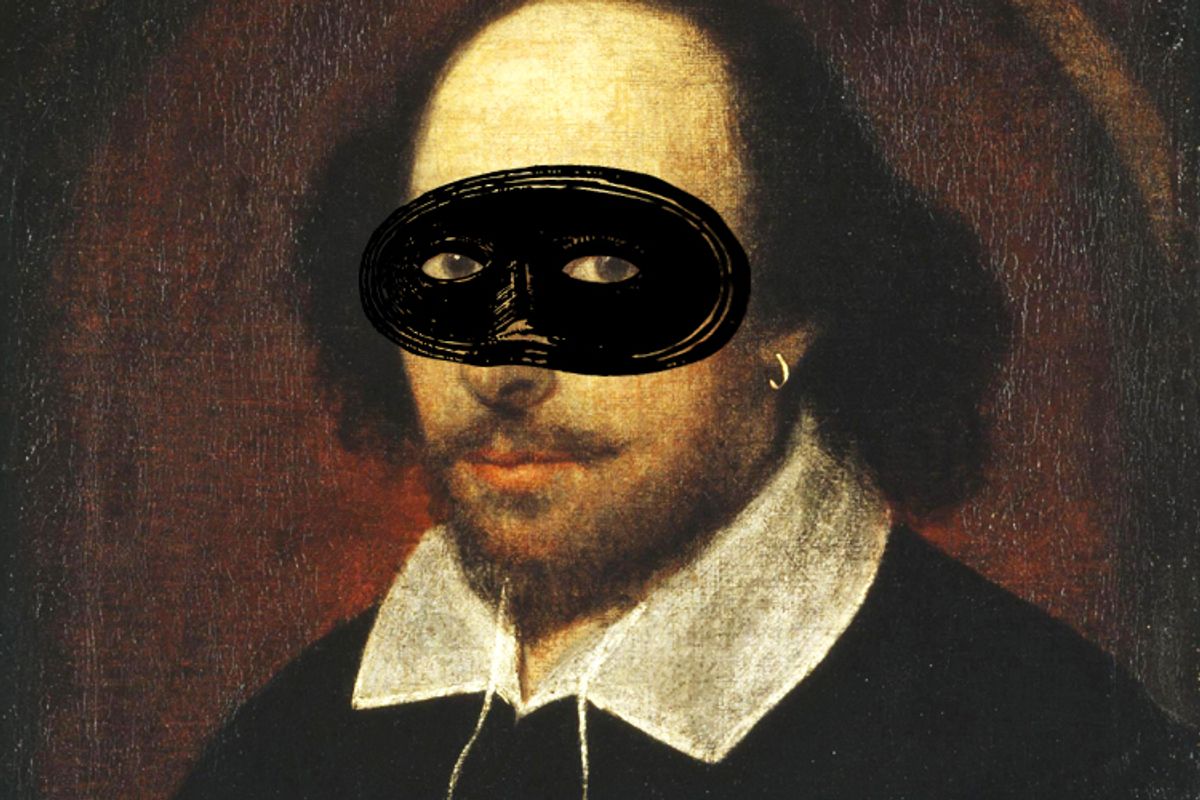 "It bristles with difficulties," observed Henry James about the "authorship controversy," the 200-year-old argument over who wrote the plays and poems attributed to William Shakespeare. You can count James (along with Sigmund Freud, Mark Twain, Helen Keller and such notable actors as John Gielgud and Derek Jacobi) among the anti-Stratfordians, those who question the conventional view. The majority of experts may feel confident that the author "Shakespeare" was none other than the man Shakespeare and not some aristocrat or intellectual using the celebrated Elizabethan actor as a front, but those who disagree — a small but vocal minority of academics, independent scholars and outright cranks — will not be deterred.

James Shapiro's penetrating new consideration of the debate, "Contested Will: Who Wrote Shakespeare?" is misleadingly subtitled; Shapiro, a professor of English and comparative literature at Columbia University and the author of the acclaimed history "1599: A Year in the Life of William Shakespeare," does not doubt the Stratfordian view himself. But he does differ from his colleagues in insisting that the quarrel ought to be publicly addressed. Until now, most Shakespeare experts have treated the anti-Stratfordians much as the mainstream of science has handled the proponents of intelligent design theory: that is, as a crackpot fringe who will only be encouraged and legitimized by any response. And we all know how well that strategy has worked out.

The Internet, that vast greenhouse for growing conspiracy theories, has naturally been a godsend to the anti-Stratfordian cause. Every era has chosen a candidate of its own flavor for the real author behind the façade of "the Stratford man"; in the 19th century, the erudite Sir Francis Bacon was preferred. The 20th century saw the ascendancy of the sensitive, conflicted Edward de Vere, earl of Oxford. Currently, the Oxfordian school is enjoying a Web-enabled boom, but the Marlovians, who favor the playwright Christopher Marlowe, have made a good showing in the new century, as evidenced by the 2002 "Frontline" documentary "Much Ado About Something."

This may seem like well-trampled ground, but wait: "My interest," Shapiro writes, "is not in what people think — which has been stated again and again in unambiguous terms — so much as why they think it." What is it about Shakespeare that causes so many intelligent people to conclude, without hard evidence, that he was a fraud? There are some obvious answers: Very little direct documentary information about the Bard's life survives, and what we've got is dispiritingly bureaucratic: wills, deeds, records of legal disputes and so on. Surely the supreme genius of English literature would have left a more distinguished paper trail?

But Shapiro sees this lack of data as merely the seed of the trouble. He blames Shakespeare experts themselves for creating an environment conducive to the flourishing of anti-Stratfordian fancy, beginning with a fateful choice made almost two centuries after the Stratford man's death. Edmond Malone, the great Shakespeare authority of the late 1700s, opened a "Pandora's box" that "could never be closed again" when, in 1780, he wrote a commentary on Sonnet 93. In a departure from the fact-based historical approach that had previously defined literary scholarship, Malone speculated that the poem's reference to a "deceived husband" pointed to jealousy and perhaps infidelity in Shakespeare's personal life.

That may not look like a momentous point to contemporary readers, but Malone knew that by 18th-century standards he was going out on a limb. For, as Shapiro insists, "we have no idea to what extent Shakespeare is writing out of his own experience or simply imagining a situation involving two fictional characters." Previous generations of historians would not have concluded that a poem lamenting a lady's inconstancy was autobiographical — in fact, the idea would probably have struck them as foolish, like asking Hugh Laurie to diagnose a mysterious illness just because he plays a brilliant physician on TV.

We now take it for granted that a poet penning love verse must be opening his heart on the page. But that's not how the writers of Shakespeare's time conceived of their work. The belief that the proper subject of literature is the contemplation and revelation of the self is a fairly recent one, dating back to the birth of the Romantic movement, which was — not coincidentally — around the same time that the authorship controversy arose. Before that, scholars were frustrated by the lack of data about Shakespeare's life, but they did not look to the plays and the poems for evidence of what he did, experienced and felt.

Malone changed that, ushering in a new way of interpreting Shakespeare's work that persists to this day. And although he was no anti-Stratfordian, Malone's innovation proved to be the thin end of the wedge. If great literature is autobiographical, then it seems reasonable to conclude that these great plays must point to a grander biography than the prosaic one we have for William Shakespeare.

All of this coincided with a climate of overheated bardolatry in which Shakespeare was virtually deified in the popular mind. Shapiro astutely links skepticism about the Stratford man with revolutionary developments in biblical and classical criticism; this was the same time that philologists and other scholars were demonstrating that the Old and New Testaments (as well as the epics of Homer) were patchwork texts, written by many authors from different historical periods.

Soon, the magpies began pecking at the reputation of England's idol. Lawyers claimed that only another lawyer could have exhibited as much knowledge of the law as is evident in Shakespeare's plays, snobs maintained that his scenes of kings and dukes betray an intimacy with the courtly life that a "grossly commercial wool-stapler" and "stupid, illiterate, third-rate actor" could never have possessed, and so on.

"Contested Will" resembles a series of not unsympathetic profiles; it could be called "Eminent Anti-Stratfordians." Shapiro admires some of the individuals who have campaigned for Bacon or de Vere — most notably the much-maligned Delia Bacon — for their vigor and eloquence. Each had his or her own reason for picking the underdog side in the authorship controversy.

Freud, for example, formulated his Oedipal theory in part on the belief that "Hamlet" was written soon after the death of Shakespeare's father. When this was later found not to be the case, he switched to de Vere, who was more conveniently fatherless. John Thomas Looney, a pioneering Oxfordian, came from a reactionary mid-20th-century philosophical milieu that longed for a return to feudal hierarchies and medieval values; the 17th earl of Oxford fit his idealized picture of the Bard much better than the bourgeois Shakespeare.

Of course, it's paradoxical that such a forceful and well-grounded argument against biographical interpretation should forever be rummaging through the life stories of its subjects in search of motivation. And one of the sophisticated pleasures of "Contested Will" is the way that Shapiro will pause on occasion to observe similar ironies. For example: "The forces of democracy and equality and the overturning of hierarchy [that is, the Internet], the very things that drove Looney to argue that Oxford wrote Shakespeare's plays, now, ironically, have come to the rescue of the movement he had founded." So I don't doubt that Shapiro is exquisitely aware of his own self-generated irony, even if he refrains from pointing it out.

We now live in a self-reflexive, autobiographical age. Shakespeare did not. We long to see ourselves in him, but, as Shapiro writes, "the greatest anachronism of all [lies] in assuming that people have always experienced the world the same way we ourselves do." When he finally gets around to laying out the evidence for Shakespeare as Shakespeare, Shapiro makes the excellent argument that, despite the anti-Stratfordians' contempt for what James called the "supremely vulgar" life of a professional actor, it just might have been the perfect preparation for the author of those immortal plays and poems. Whatever the actor's profession lacked in breadth of experience, it surely made up in its embrace of the imagination. Who else makes a regular habit of imagining himself into other people's skins?

Books Our Picks Shakespeare What To Read