Who says a traditional Jewish feast can't be a little untraditional? 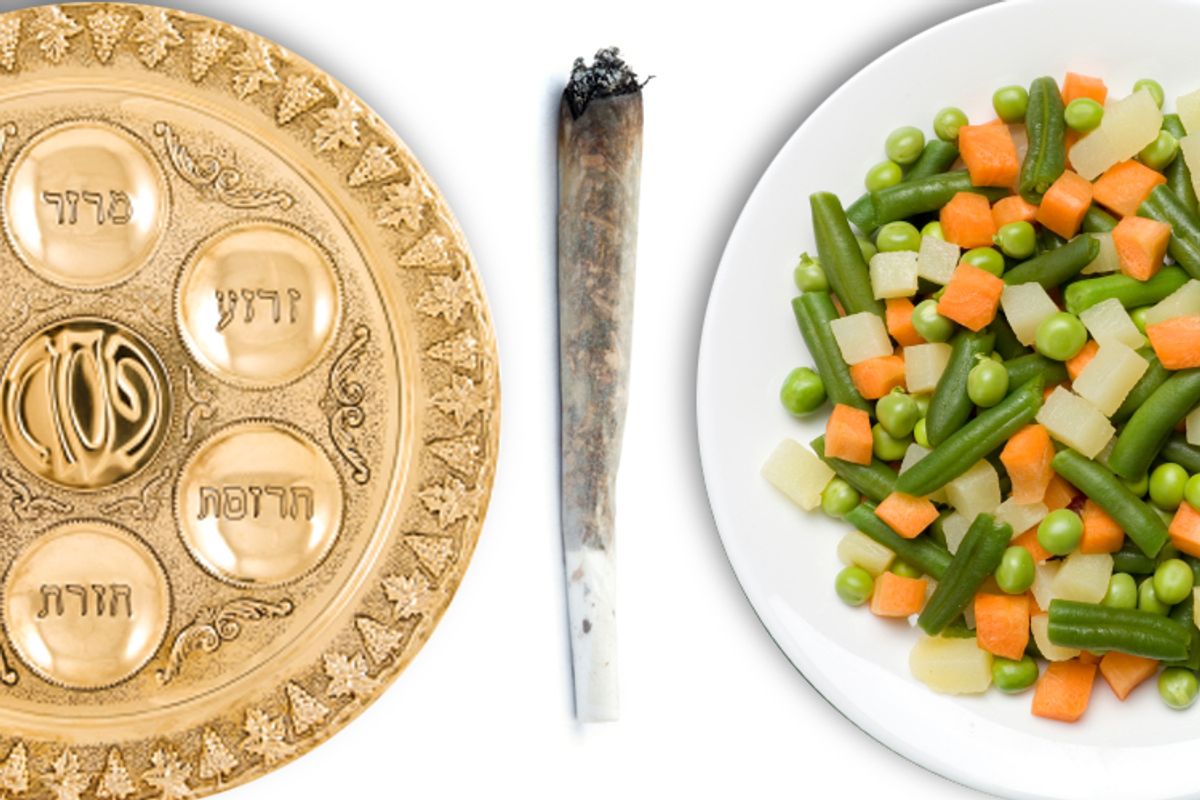 Had I been given creative license to change the Four Questions at last year's Passover Seder, they would've sounded something like this:

Why is there an avocado pit on the Seder plate?

To replace the egg that was taken from the laying hen that is confined to a cage all day.

What's up with the cooked beet?

That replaces the shank bone that was taken from the cow that never had a chance to graze.

Well, what does the orange replace?

Nothing at all, sweetie. Because women are rarely mentioned in the first place. This fixes that little omission.

Is weed kosher for Passover?

Yes, but only if you don't add water so it doesn't leaven.

Last year was the first time I attended a vegan Seder. I had been orphaned by my own Orthodox family, who usually host Passover gatherings in Norfolk, Va., where a large contingent from our New York-based clan set up shop to perform religious outreach on the local Reform Jews. It was always a big affair -- between 25 and 30 people -- that spanned the night and the wee hours of the morning. Too big, it seemed, for my cousin's wife to do it yet again. My mother gave me the news. "Moshe and the kids are going to Florida," she told me. My mother had finagled an invite to my sister-in-law's, one that wasn't extended to me. "I'm not sure if there is room for you," she hesitantly explained. The subtext was clear -- I was 26 and should already be married with in-laws of my very own to pester for holiday meals. I had been cut loose for Passover.

I didn't know what to do. Most of my friends would be with their families out of town. I searched Facebook for status updates hinting at a similar sort of abandonment when I stumbled across my friend Michael's inquiry: "Anyone out there that wants to come to a vegan seder in New Haven?" His boyfriend, Josh, had recently converted to an animal product-free diet.

Of course, Josh and Michael would be free for the holidays. After all, who is more bereft on Passover than an observant, openly gay Jewish man and his also Jewish, atheist boyfriend? Possibly only me, a formerly Orthodox Jewish woman whose family includes rabbis and people of note within the community. To be fair, neither was estranged from their families. Josh hails from Texas, which is a long way from the Northeast, and Michael from Knoxville. The latter had to remain in town over the holiday so he could attend to his experiments at a university lab.

"Sure, sweetie," Josh said when I invited myself to New Haven. And bring friends, they both said. I asked Sarah, who was a Jewess in training, to accompany me. Her own family was Greek Orthodox and couldn't be counted on to help her fulfill Jewish ritual obligations. She got on famously with my friends after she passed Michael's Sondheim friendship test, by choosing his favorite musical as her own.

As we five orphans sat down to the Passover table, I wondered how this night would be different from all the other Seders I had experienced. Well, first there was the absence of children to ask the Four Questions. Despite Josh's insistence that he was not a day over 19, I was actually the youngest at the table. I stood on a chair, as was my custom back when I was 8, and nearly hit my head on the chandelier. I recited the Ma Nishtanah, Orthodox Jew style, which is so fast you sound like the Matchbox Car Man. Our God is not the God of enunciation.

We also ate the meal at 9. I was accustomed to little kids interrupting the proceedings to ask questions about the Haggadah (the Passover prayer book), a practice that my rabbi cousin encouraged by promising cash prizes to be given out after the holiday when it was permissible to handle bribes. With eight children clamoring for attention every time we turned a page, we rarely began the meal before midnight, by which time I was already wasted on two glasses of red wine drunk on an empty drum of a stomach. But this evening, we read quickly, mostly in English and in accents that reflected our background and/or interests. Michael spoke in a Southern drawl that hinted at his Tennessee roots. Josh broke out in a Mexican accent, a tribute to his Hispanic lineage, and Sarah added a dash of Russian, a reference to the large fur hat she purchased in Prague and wore around the Upper West Side. And we all did our best imitation of Borat, the clueless, anti-Semitic, misogynistic Sasha Baron Cohen character. We spoke as though there was no orange on the Seder plate.

After the meal, which featured every vegetable known to man and was surprisingly filling, we retired to the living room to smoke our after-dinner weed that we had deemed kosher for Passover. Josh even lit his joint from the memorial candle so as not to kindle a new flame on the holiday. The weed had been Sarah's contribution. When she was first invited she asked if my friends would enjoy some illicit refreshment. Noting that Michael was quite the teetotaler, I told her to bring enough for just three. Sarah said it was as good as done. "If you bring weed to a Seder, you bring enough for everyone. Otherwise it's just rude." Apparently the rules for pot were the same as they were for snacks in a kindergarten class.

Well, dear readers, as you might've predicted, this is where my first vegan seder ended. We were simply in no condition to continue. It was 11:30 p.m. I thought of my cousins down in Florida, who probably still hadn't eaten. I was pleased to already be resting on a couch with a full belly, but I was a little disappointed. My favorite songs, "Who Knows One?" and "One Little Kid," which is about a goat, came at the end of the night. My older sister and I used to race to the end of the Hebrew and Aramaic lyrics. I beat her just once, though she claimed to have let me win. We stopped playing that game a long time ago, but sometimes we'd glance at each other over our Haggadahs from opposite ends of the table, and I would see her lip movements speed up. I'd like to think that somewhere out there, she was still racing me to the Aramaic finish.

I also wanted to know what "One Little Kid" would sound like with inspiration from Borat. But there's always this year, I suppose.

Dvora Meyers is a freelance writer based in Brooklyn. She blogs about the unholy union between Judaism and the gymnastics at Unorthodox Gymnastics.