Officials blame Caucasus rebels for attack, which wounded more than 60 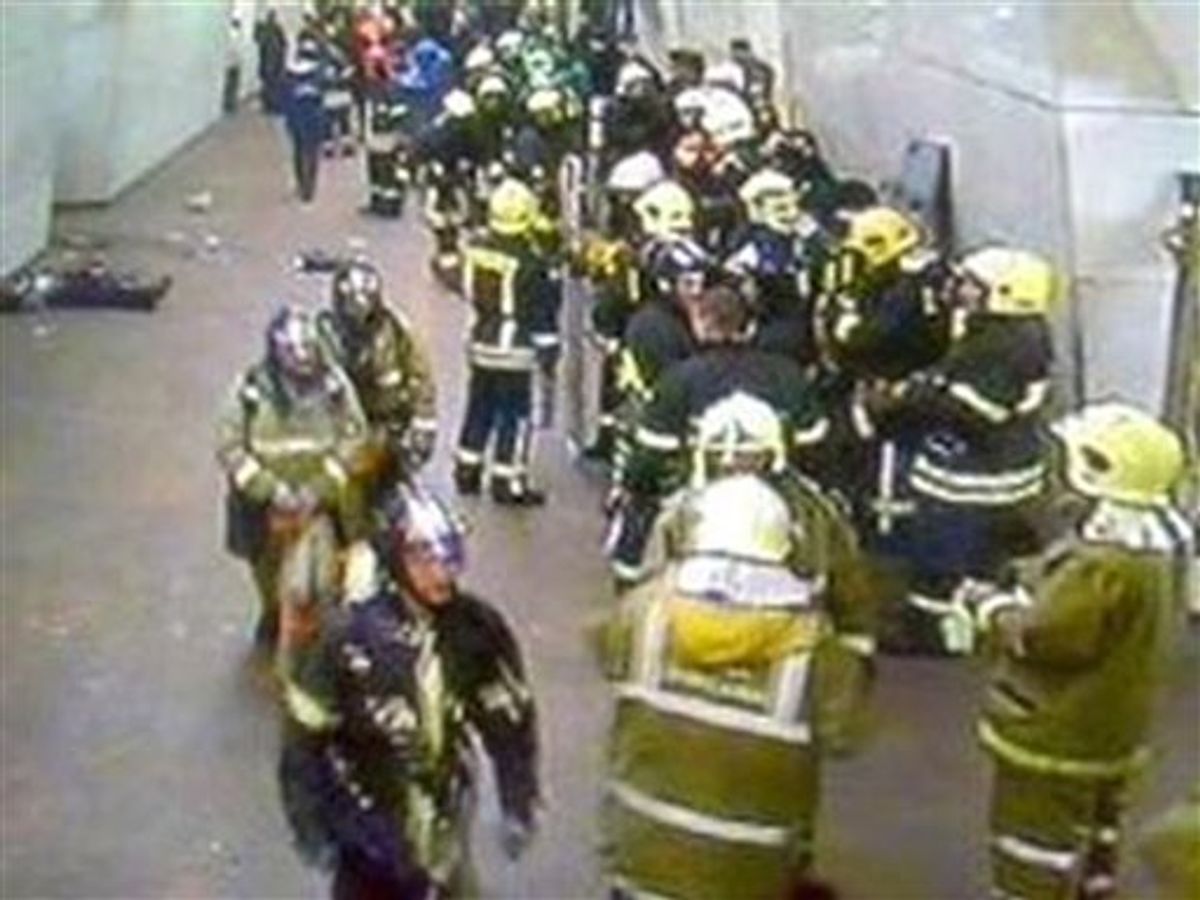 ** CORRECTS LOCATION ** In this image from security cameras emergency workers can be seen as bodies still lie in the passageway of Lubyanka subway station in central Moscow after a bomb blast Monday March 29 2010. Two female suicide bombers blew themselves up on Moscow's subway system as it was jam-packed with rush-hour passengers Monday, killing at least 35 people and wounding more than 30, the city's mayor and other officials said. Emergency Ministry spokeswoman Svetlana Chumikova said 23 people were killed at the Lubyanka station in central Moscow. (AP Photo) (AP)
--

Two female suicide bombers blew themselves up Monday in twin attacks on Moscow subway stations jam-packed with rush-hour passengers, killing at least 38 people and wounding more than 60, officials said. They blamed the carnage on rebels from the Caucasus region.

The blasts come six years after Islamic separatists from the southern Russian region carried out a pair of deadly Moscow subway strikes and raise concerns that the war has once again come to the capital, amid militants' warnings of a renewed determination to push their fight.

Chechen rebels claimed responsibility for a deadly bombing late last year on a passenger train en route from Moscow to St. Petersburg. Last month, Chechen rebel leader Doku Umarov warned in an interview on a rebel-affiliated Web site that "the war is coming to their cities."

The first explosion took place just before 8 a.m. at the Lubyanka station in central Moscow. The station is underneath the building that houses the main offices of the Federal Security Service, the KGB's main successor agency, a symbol of power under Vladimir Putin.

About 45 minutes later, a second explosion hit the Park Kultury station, which is near the renowned Gorky Park. In both cases, the bombs were detonated as the trains pulled into the stations and the doors were opening.

"I heard a bang, turned my head and smoke was everywhere. People ran for the exits screaming," said 24-year-old Alexander Vakulov, who was on a train on the platform opposite the targeted train at Park Kultury.

"I saw a dead person for the first time in my life," said Valentin Popov, 19, who had just arrived at the station from the opposite direction.

Prime Minister Putin, who built much of his political capital by directing a fierce war with Chechen separatists a decade ago, vowed Monday that "terrorists will be destroyed."

Moscow is unlikely to hit back at the rebels with massive firepower: the Kremlin has installed loyal leaders in the areas where the militants operate, making bombing campaigns of the kind used in the 1990s Chechen wars out of the question.

The Kremlin is already engaged in a huge escalation of its operations to smash the rebels, and it is difficult to see what more it could do.

The iconic Moscow subway system is the world's second-busiest after Tokyo's, carrying around 7 million passengers on an average workday, and is a key element in running the sprawling and traffic-choked city.

Russian TV showed amateur video from inside the Lubyanka station of wounded and possibly dead victims sitting and lying on the floor. The train platform was filled with smoke. The LifeNews.ru site showed gruesome photos of dead passengers sprawled inside a mangled subway car and a bloody leg lying on a station platform.

Outside both stations, passengers flooded out, many of them crying and making frantic calls on their cell phones. The wounded were loaded into ambulances and helicopters, some with their heads wrapped in bloody bandages, as sirens wailed.

The last confirmed terrorist attack in Moscow was in August 2004, when a suicide bomber blew herself up outside a subway station, killing 10 people. Responsibility for that blast was claimed by Chechen rebels.

A more devastating attack took place in February of that year, when a suicide bomber from the North Caucasus set off explosives during morning rush hour as it traveled between stations. More than 40 people were killed and more than 100 wounded.

Russian police have killed several Islamic militant leaders in the North Caucasus recently, including one last week in the Kabardino-Balkariya region, which have raised fears of retaliatory strikes by the militants.

One site opened a special page to "receive congratulations" for the Chechen rebels who "started the dark tunnel attacks in the apostate countries," and all wished for God to accept the two sisters as martyrs.

"Don't forget Russia's crimes of genocide in the Caucasus and Chechnya," said one writer. "The battle has been shifted to the heart of Moscow," another wrote.

In a televised meeting with President Dmitry Medvedev, Federal Security Service head Alexander Bortnikov said body fragments of the two bombers pointed to a Caucasus connection. The bombers have not been identified and Bortnikov did not elaborate.

"We will continue the fight against terrorism unswervingly and to the end," Medvedev said.

Neither he nor Putin, who was on an official trip in Siberia, announced specific measures and it was not clear if Russia has new strategies to unleash in the Caucasus, where violent separatism has spread from Chechnya into neighboring republics.

Although the Russian army battered Chechen rebels in massive assaults a decade ago, the separatists continue to move through the region's mountains and forests with comparative ease and launch frequent small attacks.

The agency is in charge of New York City buses and subways, as well as suburban trains, and bridges and tunnels. In London and Madrid, two other cities that have suffered transit system terror attacks, officials said there were no immediate plans to tighten security.