Do Hannity and North operate a "charitable" fraud?

Sean Hannity and Ollie North say they collect millions of dollars for veterans' kids. But where did the money go? 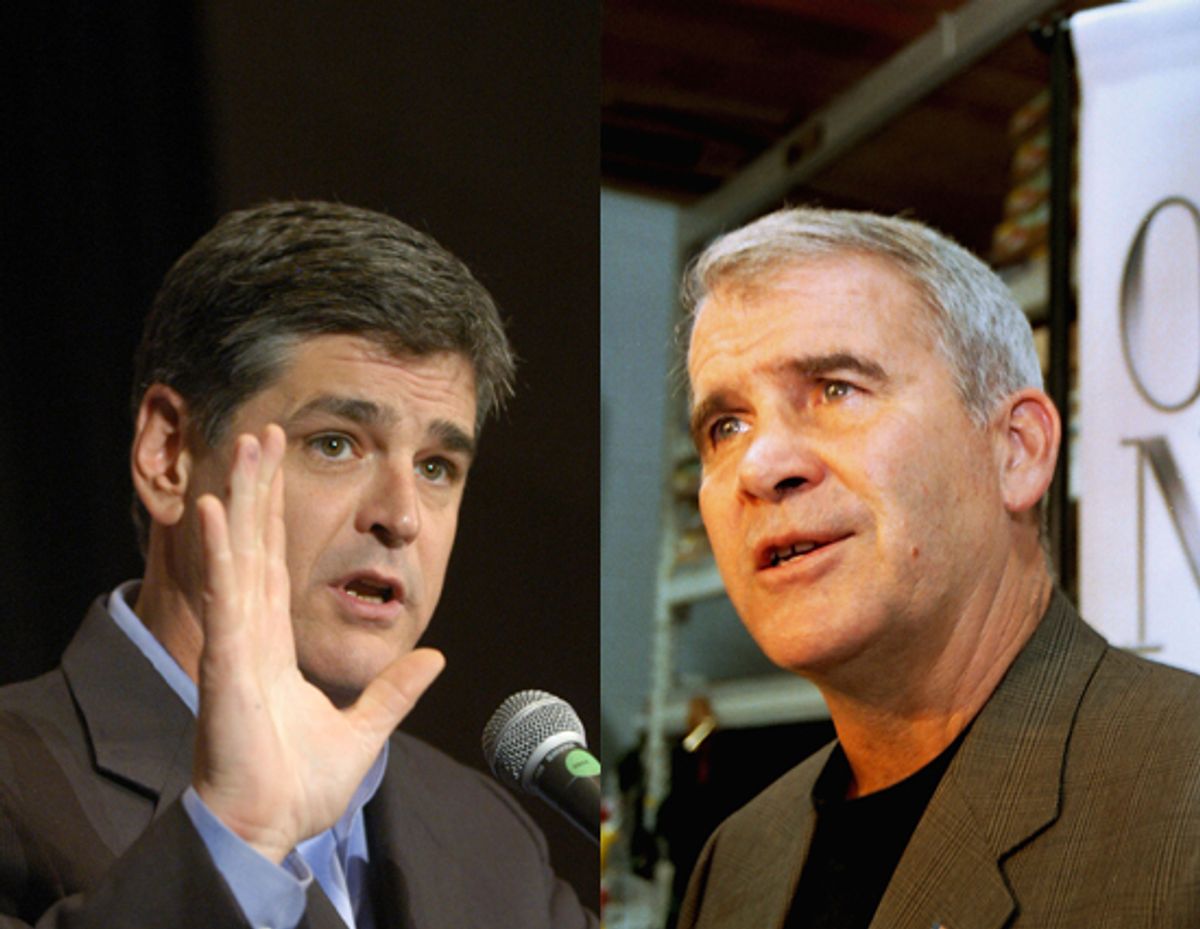 BOSSIER CITY, LA - SEPTEMBER 14: Retired Marine Lt. Col. Oliver North, author of the current best selling book 'Mission Compromised', speaks with local reporters during a book signing on September 14, 2002 at a Super Wal-Mart in Bossier City, Louisiana. North is on a 58 city tour of America to promote his second book, traveling in a bus to each event. North is also a radio talk show personality and host of 'War Stories' on the Fox News cable channel. He is also known for involvement in Iran-Contra, the transfer of funds from secret arms sales with Iran to the Nicaraguan resistance in the 1980's. (Photo by Mario Villafuerte/Gettyimages) (Mario Villafuerte)
--

A potentially damaging scandal erupted today that implicates Fox News Channel personalities Sean Hannity and Oliver North in the worst kind of charitable fraud. According to complaints filed with the Federal Trade Commission and the IRS, the two right-wing icons have exploited American veterans for personal and partisan gain. The actions filed by Citizens for Responsibility and Ethics in Washington accuse Hannity and North of misusing millions of dollars collected by the Freedom Alliance, a charity they promote and control.

Similar accusations were aired recently by right-wing blogger Debbie Schlussel, who complained that the "Freedom Concerts" sponsored by the Freedom Alliance and headlined by Hannity were not donating all proceeds -- estimated at more than $10 million -- to scholarships for the children of wounded and killed service members, as advertised. But now CREW, which had been investigating the same allegations independently before Schlussel posted her warning, has completed its own probe and filed legal actions before the two federal agencies.

The CREW complaint to the FTC charges that "Hannity and Freedom Concerts have engaged in illegal and deceptive marketing practices by suggesting that all money generated by ticket sales for the Freedom Concerts he sponsors each summer goes to scholarships for children of killed and wounded service members." Duane Ward, the promoter who heads Premiere Marketing, which produces the concerts, also runs Premiere Speakers Bureau -- which exclusively represents Hannity and North. "After staging the concerts, Premiere donates an unknown portion of the concert proceeds to the Freedom Alliance," according to CREW.

CREW points out that Hannity often promotes the concerts on his radio and television broadcasts, claiming: "Every penny, 100 percent of the donations are applied to the Freedom Alliance scholarship fund." Appearing with Hannity, North has said: "There’s no overhead. There’s no expenses taken out. Every penny that’s donated or that’s raised through things like the Freedom Concerts goes to the scholarship fund."

In its IRS complaint against Freedom Alliance, CREW says that the group’s charitable tax status should be voided because it has engaged in "prohibited political activities" such as its annual "Freedom Cruise" with Republican politicians, including Newt Gingrich and Michael Steele.

"There is little more despicable than preying upon the generosity of Americans by deceiving them into believing they are aiding the children of killed and wounded service members when the truth is most of the money is going to a for-profit venture," said CREW executive director Melanie Sloan in a press release. "Americans deserve to know whether this high-profile charity allegedly dedicated to helping veterans and their families is really doing what it says it is."

Not surprisingly, Hannity and North and their allies have sought to refute the charges first lodged by Schlussel. But one of the researchers who worked on this matter says there is much more that will be revealed in the coming days.