The heroine of Showtime's dramedy sells her kookiness a bit too hard, but it's her kids who steal the show 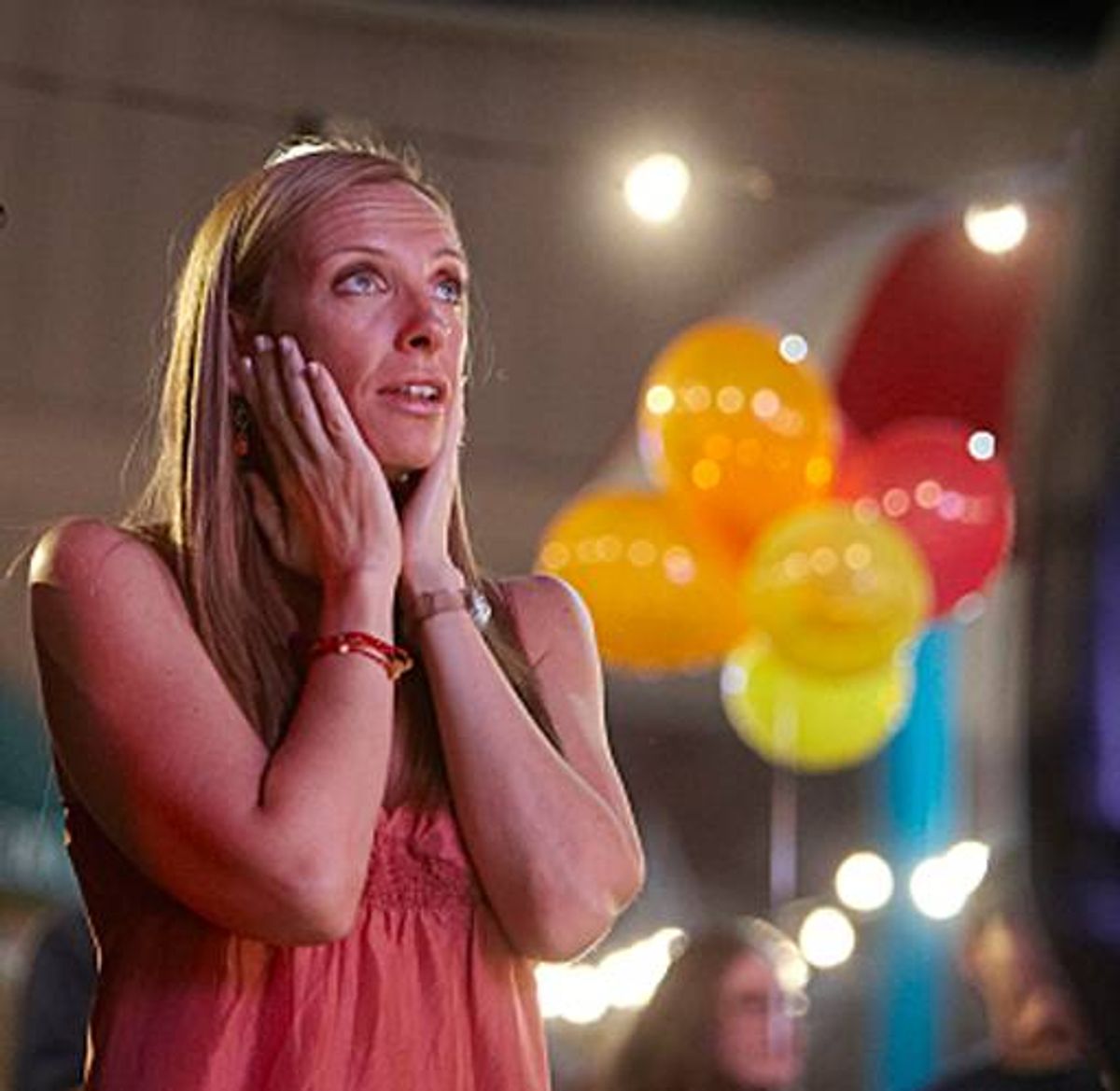 Viola Davis and Toni Collette in "The United States of Tara."
--

We all have a whole crowd of different personalities inside of us, vying for dominance: There is the grabby loser, the arrogant boss, the petulant child, the attention-seeking teenager, the apathetic employee, the jilted lover. Who will show up for lunch with the boss? The giddy provocateur, the world-weary middle manager or the whiny victim? Who will host the seven-year-old's birthday party, the masochistic overachiever or the disorganized drunk?

Sometimes, just when you think a few of your long lost alternative personalities have faded into the past forever, they unexpectedly shove one of your current limp rag personalities out of the way: At the company cocktail party, the polite wife is suddenly upstaged by a beer-bong-guzzling frat boy who can't stop asking who wants to go have a smoke; at the elementary school picnic, the friendly dad gets bored and lets the sociopathic film buff trample the life out of an innocent conversation about the Oscars; at the business strategy meeting, the polite professional cedes control to the contemptuous blamethrower who quits in a fit of caffeine-induced impulsivity.

When your moods and perspectives shift as rapidly as the tides, how do you trust that any of your decisions make sense? The answer: You don't. When any big move is incited by one personality, the only thing to do is to wait and see what your six or seven other personalities have to say about it. Sure, your temperamental teenager and your oversensitive artist want to quit your job and move to France, but what will your middle-aged stick-in-the-mud and financially conservative scaredy cat have to say about it?

Make no major decisions until the tribe has spoken.

Tara (Toni Collette) on Showtime's "The United States of Tara"(10:30 p.m. Mondays) may simply represent an exaggerated version of the multiple personalities that most of us struggle with on a daily basis, but who can't relate to being gripped by a sudden urge to swagger into a bar and kiss the sexy bartender, or don an adorable '60s housewife dress and an apron and tidy up the house? We all struggle against the restrictions of modern life, Tara just lets her alternate personalities fight battles and give in to urges that she won't allow herself to indulge.

Frankly, this made Tara something of a bore in the show's first season, particularly in contrast to her far more dynamic and amusing alternate personalities – not to mention her teenage kids. In the show's second season, though, Tara believes that her medications are finally keeping her alternate personalities under wraps, freeing her up to gesture, goof off, giggle and occasionally break out into song, much to the chagrin of her two children, and to the delight of her ever-supportive spouse, Max (John Corbett).

No matter how kooky and alluring Tara and Max seem hell-bent on convincing us that they are – this was a running theme of the first season, even when the couple was under siege from Tara's "alters" -- their two kids always steal the show. Kate (Brie Larson) has graduated from high school and is working for a debt collection agency, but she can't quite keep herself from spending time with Lynda P. Frazier (Viola Davis) an artist whose money she's supposed to be collecting. The two talk comics and get high together in odd but affecting scenes that toy with the similar identity crises faced by the two women. Kate wants to conquer the world but can't figure out how to navigate the lackluster realities of the working world without losing her soul, and Lynda has already marched to the beat of her own drummer for years, but in middle age, finds herself looking back and wondering what she lost along the way. Lynda is sort of a hero to Kate; on the other hand, Kate doesn't really want to become her, because it means being short on cash and living the true bohemian's life, something that smacks of the weirdness and unpredictability of Kate's life with her unstable mother.

Meanwhile, Marshall (Kier Gilchrist) is struggling with his identity as a gay kid. Does he want to hang out with the other gay kids at the "Gable" (gay table) as they call it, or will he get pigeonholed in ways he's not prepared to live with? Is he attracted to girls? Is he bi? Is he really willing to cast his former interests aside in order to conform to the expectations of his gay friends, expectations that sometimes seem just as limiting as the expectations of the straight world?

Tara and Max are believable enough as a thoroughly modern (if somewhat messed up) couple, but their behavior together always borders on cloyingly cute. While it's amusing to watch Kate and Marshall try out new identities and toy with new ideas of who they are, when Tara and Max do it, they just seem sort of adrift and foolish. When they sing Air Supply's "I'm All Out of Love" or have sex in the neighbor's backyard, we're meant to believe that they're just a fun, really cool, zany sort of couple, the kind of couple that does tequila shots on a whim or runs naked through the streets of their neighborhood just to shock the neighbors or plays Twister or blasts rap music or any number of other irritating and not very endearing things. We want to root for Tara and Max, but we're being sold on their ultimate delightfulness too hard, in a way that we were never sold on the delightfulness of show creator Diablo Cody's other zany characters, from Juno to her dog-loving stepmother to her geeky-lovable boyfriend.

Meanwhile, Tara's sister Charmaine (Rosemarie DeWitt), who stole plenty of scenes during the show's first season, has been reduced to an engagement-ring-obsessed bore this season, a two-dimensional parody of the late '30s single girl who's spent much of the last decade trying to get some man to sign on the dotted line. While certainly a familiar and all too real archetype, Charmaine doesn't bring much of a new spin to this picture, with her endless prattle about diamonds and the joy, joy, joy of finally having tricked someone into marrying her. It's obvious her happy little future-bride circus is going to get burned to the ground, that no one is all that enamored of her fiancé, that Neil (Patton Oswalt) is about to say something sweet and funny that makes her realize that her one chance at happiness has been hiding out in a chubby short guy disguise this whole time. Unfortunately, unlike the stepmom or the boyfriend on "Juno," Oswalt hasn't been given the kinds of affecting and memorable lines that make it clear what kind of guy he is. What kind of guy is he, anyway? In his scenes with Max he's simply a foil, and in his scenes with Charmaine he's Mr. Disappointed. Oswalt and DeWitt are wasted on a storyline that retreads such thoroughly trampled ground.

That said, though, when Tara once again finds herself struggling with the mystery of the trauma that made her the way she is, it's compelling enough to keep us hooked. Somehow her looming melancholy and fear are linked to the suicide that's taken place in the house next door. Unlike "Nurse Jackie," a show that's maybe more satisfying on an episode-by-episode basis, "The United States of Tara" presents us with a central question that's intriguing enough to keep us coming back.

As for Tara's alternates, they're still more interesting and genuine feeling than Tara herself, enough so that it's hard not to hope one of them will show up, shove Tara aside, and start toppling everyone else's apple carts left and right – which makes watching "The United States of Tara" an odd experience, roughly akin to waiting for one of the terrorists on "24" to kill off Jack Bauer and blow the whole country to smithereens.

But maybe that's just our inner terrorist talking. When you're possessed by a whole gaggle of nutjobs looking to stir things up, there's no telling who might take the wheel next and start making a big mess of things. Like Tara, all you can do is grit your teeth and hope for the best.