Sweet Zeus! Where are the good Greek films?

Classic mythology offers the most dramatic stories ever. Why are Hollywood's attempts to re-create them so lousy? 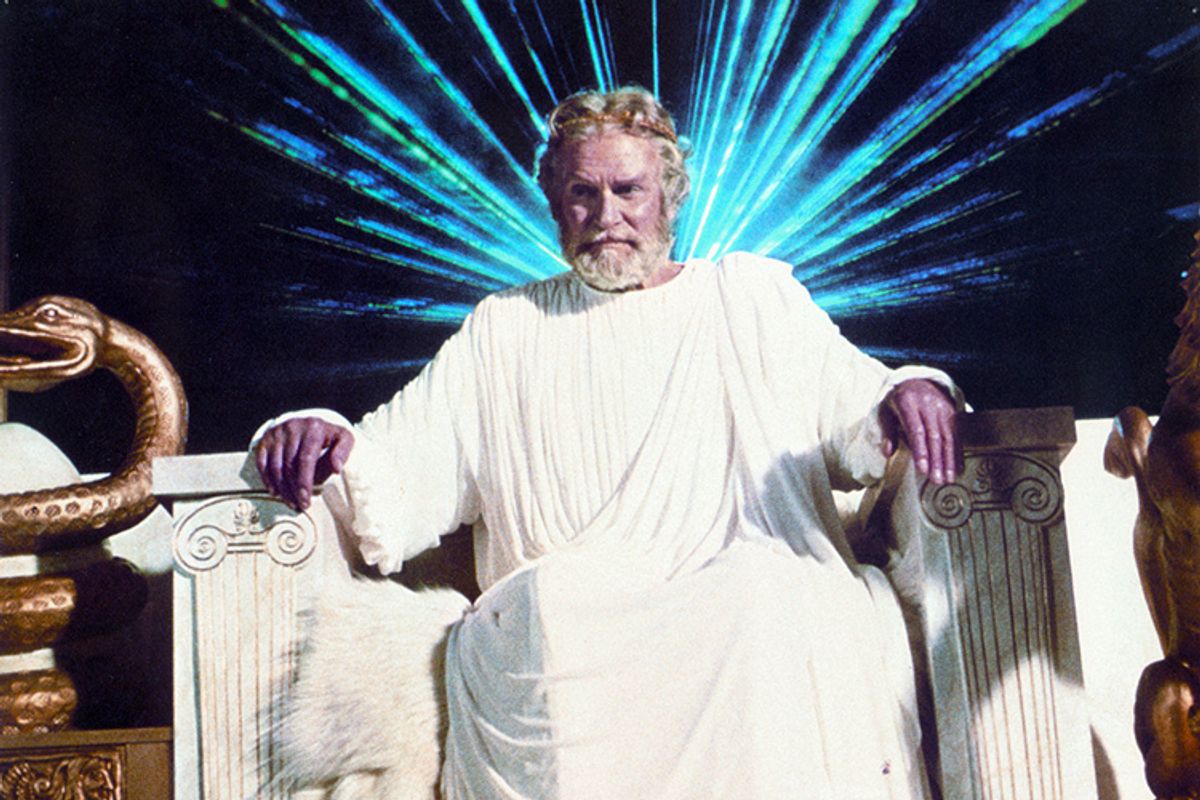 Watching the trailer for "Clash of the Titans," I know as surely as the Oracle of Delphi that this movie will be foul. A remake of the 1981 film -- fantasy classic to some, pure hokum to others -- it will swoop upon us April 2.

Here's what I wonder: Why has no halfway decent director made a film about the Greek gods and their attendant nymphs and heroes? I don't mean contemporary retellings like "Percy Jackson & the Olympians: The Lightning Thief." I mean a movie that re-creates the Greek gods on their own terms.

Think about what James Cameron or Peter Jackson could do with this material -- the original stuff from Hesiod and Ovid and Apollodorus, which is so much better than toga-clad extras and grunts fighting giant scorpions.

TV spots for the 2010 "Clash of the Titans" played endlessly during the Vancouver Olympics. In one, Liam Neeson as Zeus cries "Embrace your birthright, Perseus!" in tones stinking of Stilton. The following clip is like a low-rent "Gladiator" jammed with rock 'n' roll:

Liam-as-Zeus intones, "Release the Kraken!" Never mind that the sea monster is an escapee from Scandinavia and the "Pirates of the Caribbean" franchise.

I don't give a hoot about the purity of sources in fantasy or science fiction. The Greek gods have been ripped off by so many writers they're very far from Homer's time. I also know I'm not the audience for this movie, but as a longtime fan of Greek myths, I could have been, and that's what frustrates me.

In fact, the 1981 "Clash of the Titans" still has some spark despite the outdated (and goofy) special effects. But as the basis for the 2010 remake it's a poor substitute for the myth of Perseus. It's like copying a copy of a cartoon.

The 1981 movie is basically the Hollywood gold standard for Greek gods, with Laurence Olivier as Zeus chewing the fake columns on Olympus. As in the Greek myths, the sniping goddesses give off the most heat, especially Claire Bloom and Maggie Smith. When the head of a statue crashes to the ground -- then becomes animated with Dame Maggie spitting curses at hapless human worshippers -- it was almost worth watching this again on Netflix.

Almost. There are a few good moments from the actual myth. The three blind witches, for instance, who share a single eye and have a taste for human flesh (complete with a squirming hand in a cauldron) manage to upstage Medusa.

But the story of Perseus is such a rehash that the witches might as well have sucked out his marrow. It feels like anti-myth. Perseus is played by Harry Hamlin in a disco 'do -- remember him? -- handsome, vacuous, idiotic. And it's not enough that the deformed creature Calibos is a Hollywood invention; his lopped-off hand is replaced with what looks like a deadly salad fork.

Then there's the mechanical owl sent to Perseus by the goddess Athena, a riff on R2-D2, down to the chirps and clicks it "speaks" to Perseus. Even in 1981, this was tacky.

The 2010 "Clash of the Titans" will have amazing special effects (in 3-D) and get rid of some of the Velveeta offenses of its predecessor (not a high bar, granted). The synopsis on the Warner Bros. Web site makes clear that the plot has changed, including a clash between Zeus and Hades (Ralph Fiennes).

Both the 1981 and 2010 movies mash up references from a bunch of Greek myths, but that's OK. The original myths themselves were retold and remixed wherever people listened to them, and the story of Perseus isn't any more real than Tolkien's fantasy world in "The Lord of the Rings."

What I do question are plot swerves that kill the mythic dimension or reproduce the dustiest clichés. Many of the changes Peter Jackson and his fellow scriptwriters made to the "Lord of the Rings" trilogy, for example, addressed poor writing and anachronisms in the Tolkien saga, especially regarding female characters. Ang Lee's "Crouching Tiger, Hidden Dragon," drawn from the flying ninjas of kung-fu movies, also plays with gender roles.

Yet in "Clash of the Titans," Danaë, Perseus' mother, is cut from the story once Perseus is of age. In the opening of the 1981 version, we see her clutching the babe as they're stuck in a box and shoved out to sea by her nasty father. Protected by Zeus -- who impregnated Danaë in a golden shower of light (yes, that's in the myth) -- the mother and half-god son land on a peaceful island.

There's one shot of a bare-breasted Danaë nursing her baby, followed by a cut to naked Mom and little boy ambling along the seashore. Again, think 1970s. Then Perseus goes on his adventures, and Danaë disappears.

But in the Perseus myth, Danaë is a key player. Once Perseus is grown, the king of the island tries to force her to marry him. Danaë refuses. After rescuing his love Andromeda from a sea monster, Perseus returns to save his mother. He pulls out the Medusa's head and turns the king and his courtiers to stone.

As for Andromeda and her vain mother Cassiopeia, they hail from Ethiopia in the myth, but you won't see women of color in those roles (or, to be fair, in any images of Andromeda by Renaissance and classical painters). Given Zoe Saldana's turn in "Avatar" and her sultry take on Lt. Uhura in "Star Trek," just consider what a little imagination or a few moments on Wikipedia (type in "Andromeda princess") could have brought to this project.

Maybe the goddess of wisdom is still whispering in my dreams, but I'm offering Athena's protests here. I'm remembering how much I loved the Perseus story when I first read it in Edith Hamilton's "Mythology." I still see my fifth-grade self lying on the green Indian-print bedspread in my bedroom, thinking, Go, Danaë! Go, Athena! (And, why not?) Go, Medusa!

This morning, I got out Hamilton's popular retelling of the Greek myths, originally published in 1942, and came across this description of Perseus:

"He went to Delphi, but all the priestess would say was to bid him seek the land where men eat not Demeter's golden grain, but only acorns. So he went to Dodona, in the land of oak trees, where the talking oaks were which declared Zeus's will and where the Selli lived who made their bread from acorns."

Talking oaks are cool. Hamilton also describes the god Hermes as "radiant" in a winged hat and sandals. It's not a stretch to Jude Law. And what about Athena, who "guided his hand" when Perseus killed Medusa?

Note to Hollywood: You can't make this stuff up. So try reading those who did.