Gosselin's poor dancing skills are the least of her worries, but she's so clueless I almost pity her 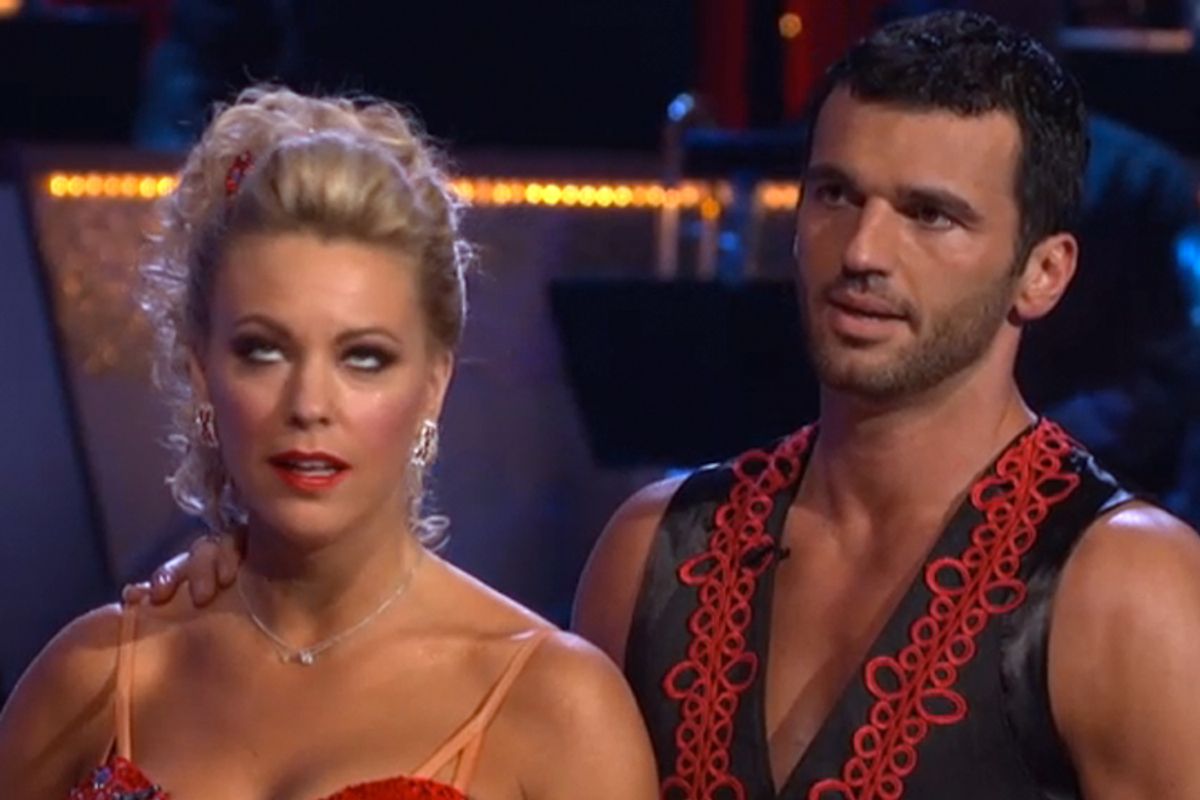 Kate Gosselin and Tony Dovolani on "Dancing with the Stars."
--

This show is so delightfully corny, isn't it? It's as if Disney stars were kidnapped at 12 years old and held in a time capsule, only to be released back into the wild and told they were going to star in a dancing show.

The opening number seems to have been stolen from the Lawrence Welk collection and goes something like: "Bup bah duh bah bah bah bah bah, bup bah duh bah dup" – sung by weird bubble people hiding in the background. Meanwhile, the dancers are wiggling and winking their way down the stairs. If I didn't know any better, I would say the show is targeted to the tea party activists, with some covert Obama-hating subtext spelled out in CIA code by the flailing limbs of Shannen Doherty.

But we'll ignore that for now, as we review the evening's performances:

Here's the genteel flower now. The show has hardly begun and I already know my favorite quote of the night: "Fuck you and your pas de ba ray," says a clearly frustrated Shannen to her dance partner (spelled phonetically, because I have no idea what she's talking about). Just for a second we know why producers have been quaking in their boots all these years. From the opening dance move in which she looks like she's swinging a hidden penis beneath the sparkles, shucking with the subtlety of Glenn Beck, one wonders if she will have anyone picking up the phone for her. Well, except for the tea party people. Not even her insufferable yet adorable dancing partner can distract us from the man-beast hiding in Shannen Doherty.

Oh, the rehearsal isn't going well. Aren't the dance instructors supposed to be tougher than this woman? What can I say about this – he's cute and English-ish, but this is a disaster. Bruno says his knickers are in a twist, and that would explain a lot.

I don't know how I feel about Evan (another compulsive winker – maybe that's my problem with him), but he's light years ahead of Aiden in the dancing department. I don't think that people are going to vote for him, though – something about the casually cocky demeanor that I think is going to work against him – not to mention the fact that his partner has the personality of a golf wife living in a gated Florida community.

Save us, Niecy. Shake those jiggly bits, girl. She dances with the confidence and genuine joy that the rest of these fools are working hard to simulate. A vision in pink. HAY!

I'm not prepared to like him yet, although he's chipping away at me little by little. Is it possible that the "aw shucks" routine is for real? He made me swoon a little with that opening move – I kinda wish I was the microphone stand. But I still think that if he had to choose between pulling a baby out of traffic and staying on the show, he would find a way to explain the baby’s death as God’s will. Dance was good, though.

Botox needs to grab Buzz and Lois for an AARP magazine centerfold. The two of them are pinched beyond recognition and sweet as pie. His scores don't matter. With that salute to the flag and "Fly Me to the Moon" nostalgia, he's going to have every tea party activist and person over 50 voting for him. You can tell the judges are terrified to say anything bad for fear of being audited by the IRS and sent to Guantanamo.

She's a sexy beast, there's just no doubt about it. And clearly more trained in dance than the rest.

Who would have thought that the ESPN reporter would have emerged as the drama queen of the bunch? I want her to stop talking. And I don't really understand what they're saying about her gracefulness. She seems to be swiveling as if she has a 10-foot pole stuck up her ass. The pole seems to be centered on its axis, though, so maybe that's what they're so excited about.

I don't know that Pamela has many speeds other than 5th-gear sex overdrive -- but it's working for her. Every demure purr and cute little hiccup seems to have a lively character behind it, as if she were in on the joke with the rest of us. That's always been her strong suit and the thing that makes her so likable even as we try to make sense of her angel/devil persona. I want her to find a nice Jewish boy and settle down in Yonkers. The dance was a hit, but does anyone really care?

He’s another one who's confusing me. I find him more appealing as he struggles awkwardly through the dance and keeps a stiff upper lip while the judges rip him apart than when he makes love to us through the camera during rehearsal. I would still like to see him naked, though. Something tells me that as his career goes on, and he takes a bigger bite out of fame, that may not be out of the question.

I've been worried about Kate Gosselin’s hair extensions ever since I knew she put them in. I don't really know how they work exactly, so maybe this worry is frivolous. But with all of the head whips and dips, is there any danger that one of them will release, fly through the air and slap Len in his cranky little mouth? I need somebody to reassure me that it's possible this might happen, because there has to be karmic payback coming to Kate Gosselin soon. Please, Buddha.

But there are bigger things going on with her this week. For the first time, I felt a little bit bad for her because I genuinely don't think she understands how awful she is. I mean, if her dance teacher was compelled to walk out on her after two weeks, how on Earth did her husband stay with her for all of those years? "I don't get it," she keeps saying, "I just don't get it."

Making a complete ass of herself with that Soundgarden video smile plastered on her face is probably the most endearing I've ever seen her. Something tells me that being loved by the masses is not one of her top priorities, though. I guess we'll just have to wait for the "Kate’s 8 Tell All" special in 10 years to find out what's really driving this woman. Because we know it ain't her love of dance.