Sandra Bullock should have stayed home?

Columnist David Brooks uses the actress to illustrate the danger of choosing a career over love. Gimme a break! 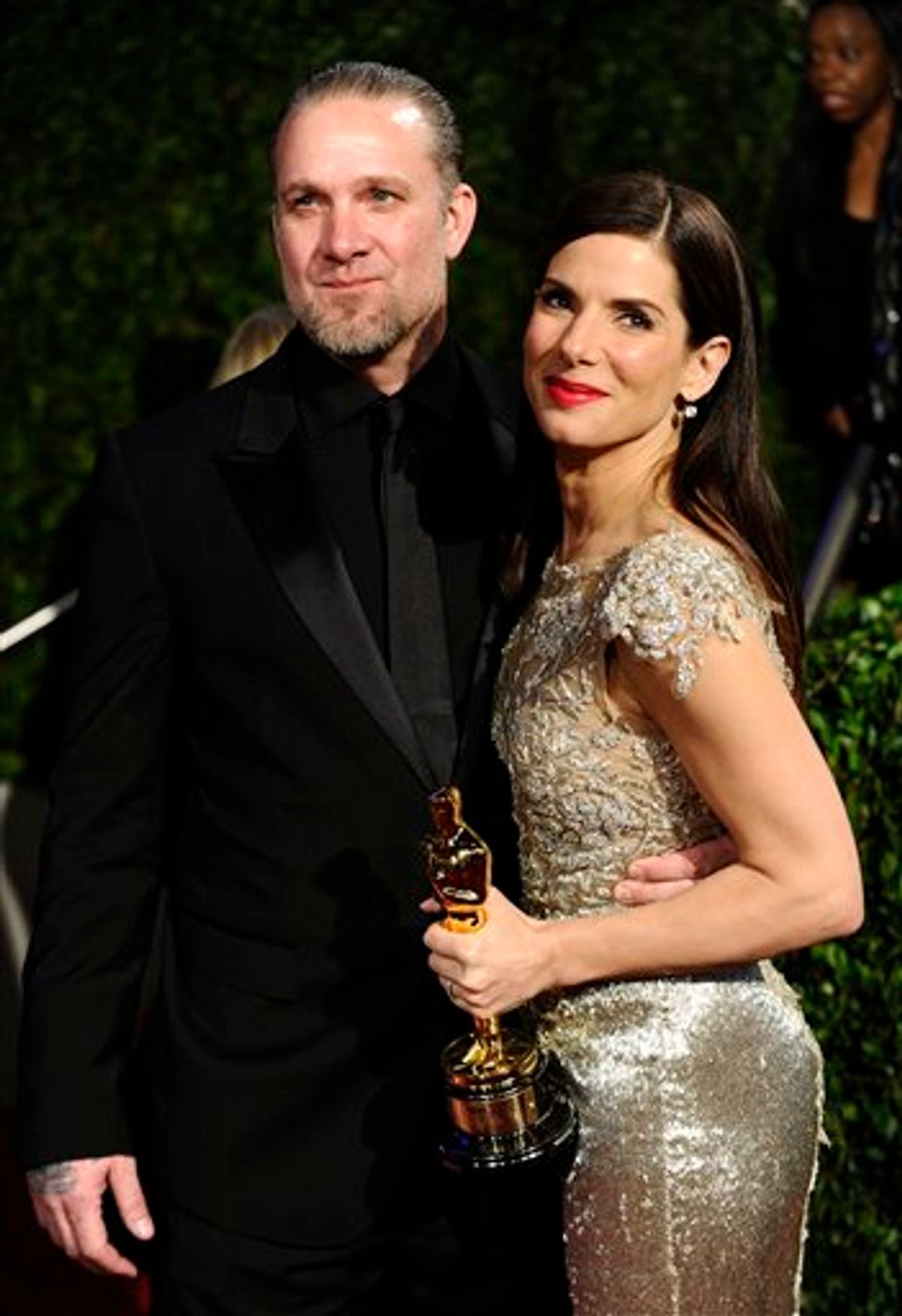 FILE - Sandra Bullock and Jesse James arrive at the Vanity Fair Oscar party on in this March 7, 2010 file photo taken in West Hollywood, Calif. Sandra Bullock has canceled her appearance at the London premiere of "The Blind Side" scheduled for Tuesday March 23, 2010 almost two weeks after winning a Best Actress Academy Award. In a statement released by Warner Bros UK., the 45-year-old actress says she can't attend the event for "unforeseen personal reasons." (AP Photo/Peter Kramer, File) (AP)
--

OK, so he doesn't go so far as to say that personal ambition is responsible for Sandra Bullock winning an Oscar and, you know, "losing" her husband. He doesn't frame it outright as a uniquely feminine compromise. He doesn't even touch on the absurd "Oscar curse" buzz. He instead poses some "philosophic" questions -- "Would you take that as a deal? Would you exchange a tremendous professional triumph for a severe personal blow?" -- and then scolds the "absolutely crazy" readers who answered in the affirmative. (Yet more proof of the masochism of people who read David Brooks.) But, let's be real, he's chosen to write about a piece of pop culture gossip that has largely been talked about in terms of a woman ultimately trading love for her career. And promulgating the work-home dilemma is Brooks' bread and butter: He believes that women are happier in the domestic sphere. So, I can't help suspecting that there is a stay-at-home undercurrent in his argument.

That isn't to say he doesn't make some valid points. With the help of a mountain of data, he argues that money, fame and success are no guarantee for happiness -- or, as P. Diddy once opined, "Mo' money, mo' problems." It's the quality of one's personal relationships, of course, that has a stronger link to personal happiness. Brooks lays out the evidence: "The daily activities most associated with happiness are sex, socializing after work and having dinner with others" and "being married produces a psychic gain equivalent to more than $100,000 a year." (Note that in the same column he underscores that "the relationship between money and well-being is complicated.") I look at this evidence and see proof of the importance of having all sorts of strong relationships -- with friends, family and significant others -- whereas he sees only an endorsement of traditional relationships defined by the institution of marriage.

In his mind, "the Sandra Bullock trade" isn't some far-fetched hypothetical along the lines of "If you were stuck on a desert island, what's the one thing you'd want to have with you?" He actually sees it as an either-or dilemma. Forget the possibility that one could forgo the professional success and also have a miserable marriage, or that giving up on your personal ambitions could actually harm your relationship. There is no room for such nuanced considerations when you live in a black-and-white world.