Who cares about Haiti's college kids?

Universities were flattened by the earthquake, and getting them open again seems to be nobody's priority 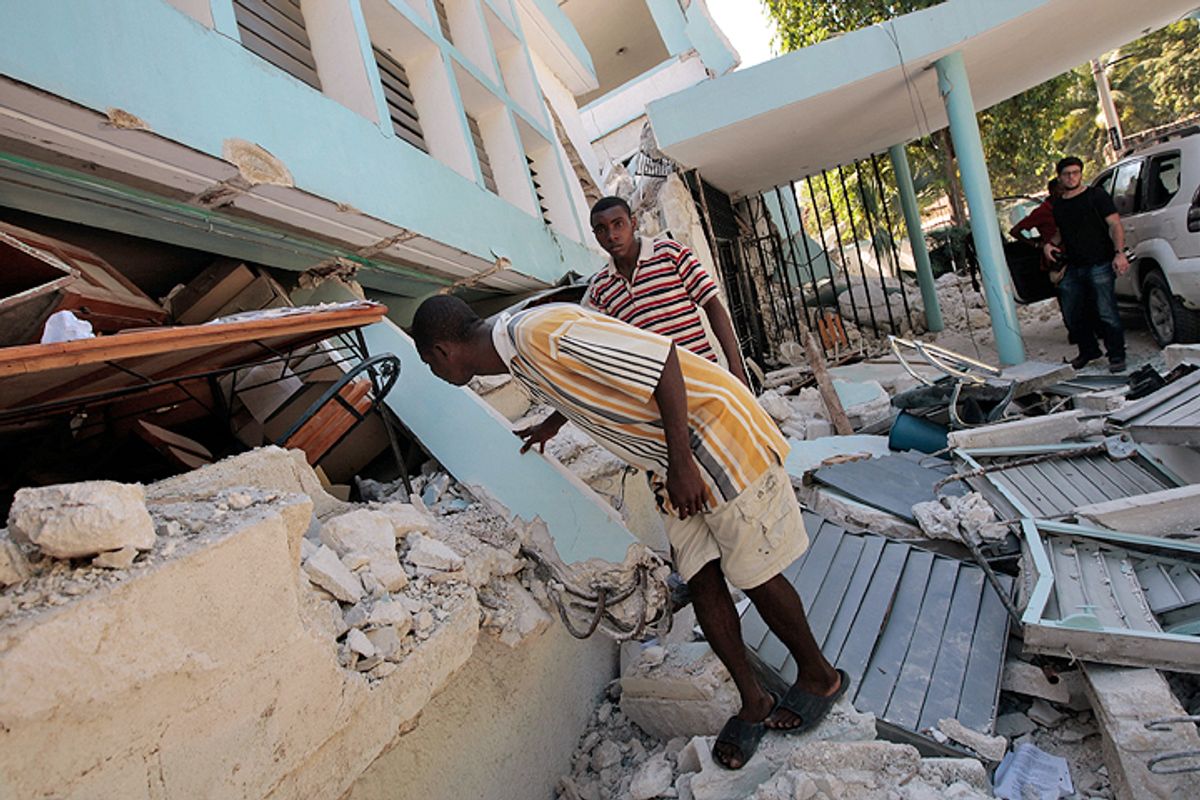 PORT AU PRINCE, HAITI - JANUARY 15: Haitians as they pass by peek into the rubble of the College of St. Pierre that collapsed during the earthquake this week on January 15, 2010 in Port-au-Prince, Haiti. Haiti is trying to recover from a powerful 7.0-strong earthquake that struck and devastated the nation on January 12. (Photo by Chris Hondros/Getty Images) (Chris Hondros)
--

Johnny Fontaine shows me around Cite Soleil. His neighborhood is rough, by Haitian standards. It’s the largest slum in the Americas, with over 350,000 people. It’s also a Red Zone -- a place deemed so dangerous, it’s OK for aid workers to ignore.

We pass a soccer field that survivors turned into a refugee camp after the Jan. 12 earthquake rocked Port-au-Prince to the ground. Pointing to makeshift tents, Fontaine jokes, “Everyone is an architect.” I smell an open sewer around the bend. Islands of plastic, scrap metal and feces float downstream. Pigs wade in it. Kids skip along the sewer banks, flying kites made of tattered garbage bags and splints of wood. One takes a time out, his big toe bright red with a fresh cut. A half-naked boy, shy in the presence of foreigners, pulls his T-shirt over his penis. “You’re just seeing the nice parts,” Fontaine says in earnest.

He’s a rarity here. His parents are together. Though Dad is out of work, Mom sells fruit juice at Croix des Bossales (the former slave market). The baby of the family, he’s the first to go to college. He got a scholarship to attend the State University of Haiti.

Education was more than his ticket out of poverty. It was a way to understand home. “I’m lucky to be alive,” the 26-year-old says. He’s not just talking about the earthquake. In 2005, Fontaine survived the standoff between U.N. forces and gangs that left civilians maimed and killed. An avid soccer player, he quit the game and hit the books because “people need to be trained to solve problems with knowledge, not with guns or machetes.”

Fontaine is one semester shy of a bachelor’s degree. The radio announces that class resumes in April. Only a fool would believe it. At least 28 universities crumbled and up to 15 percent of the university population was crushed to death during the earthquake, according to a report by the Interuniversity Institute for Research and Development. It’s the first to tally casualties in higher education. Easily among the hardest hit, the sector is nowhere in the rebuilding plan.

At a mega-conference in New York on March 31, nations will parse out Haiti’s long-term recovery. They stand to pledge more than $17 billion -- well over the nation’s GDP. Slammed with pleas for aid, donors are missing the fact that college kids could be the way to create a long-overdue middle class. No one at the gathering is focused on rebuilding the best universities, or even making a contingency plan to get core classes going.

Dr. Louis Marcelin, INURED director and a University of Miami professor, argued before the quake that his country needs professional training to pull itself into the 21st century. “I’ve never seen a modern society coming out of high school.” With the world watching Haiti, checkbooks in hand, he urges, “Higher education is an investment, not a handout.”

Ironically, the learned people appraising Haiti haven’t contemplated the fate of its university students. “I’m not blowing off higher education," says Dr. Carleene Dei, who heads the USAID mission here. "It’s just that everything is urgent.” The U.S. puts $12 million annually into Haitian schools, mostly primary. She doesn’t expect that figure to change. In a country where children can’t read, college grads seem like a luxury. “No one donor is responsible here,” Dei explains.

Fontaine’s university is the oldest and largest in the country. Yet its chief officer hasn’t gotten face time with any major donor or his own nation’s education ministry. Dr. Jean-Vernet Henry says, “They mailed my invite to the wrong address. If I’d known, I would have gone without a doubt.” His expectations are low. Today he’s scavenging for big tents to shelter a few classes.

To Michele Pierre-Louis, the country’s former prime minister, it’s not deliberate omission so much as historic neglect. "We’re operating with a colonial framework. Elite and masses only,” she says. Higher education has never been international donors’ priority because, according to her, “it hasn’t been our government’s priority.” Before entering politics, she was a professor. Every semester she asked her class, “If you were to get a visa, would you leave the country?” Every student answered yes.

Brazil just committed to bring 500 university students over on scholarships. It’s encouraging other countries to follow suit. The stopgap measure is valiant, though it could promote the same brain drain that’s long crippled Haiti. When talented youth don’t see a future at home, why come back?

Haitian schools were once the best in the Caribbean. Under the Duvalier dictatorship, they fell into disarray. “It’s a competition in mediocrity,” says Marcelin. Management is poor across the board. The government’s failure to regulate has brought down the floor. Only 10 of the 145 private universities are accredited. Of the remainder (often religiously based), 67 percent don’t have permission to operate.

Marcelin has spent decades studying Haiti’s problems with violence, at home and in the diaspora. To him, higher education is a missing link in the development chain. Without college grads, there’s no one to teach young kids how to read. “Without graduate programs,” he says, “smart Haitians can’t be the next generation of development professionals and innovators.” If donors decided to invest, building universities outside of Port-au-Prince could be a humane way to decentralize the country.

Back in overcrowded Cite Soleil, 20 students -- all the first in their family to go to college -- huddle in a concrete room that looks like a jail cell. The blackboard, tiny benches, and chipped pink paint give away that it’s a kindergarten. Marcelin, the only professor in their lives for now, wanted the meeting to brainstorm how they can support each other in these tough times. Everyone lost friends during the quake. Schools are cemeteries.

His prize pupil Fontaine stands at the head of the class, calling on raised hands and scribbling ideas. I ask him if, afterward, we can take pictures in front of his home in the shantytown. He stares at me blankly without saying a word. Marcelin gently answers, “He’s already aware that his misery is a commodity. He wants hope to be.”