Being broke drove me back to the dreaded food service industry ... and scored me the recipe of an NFL great 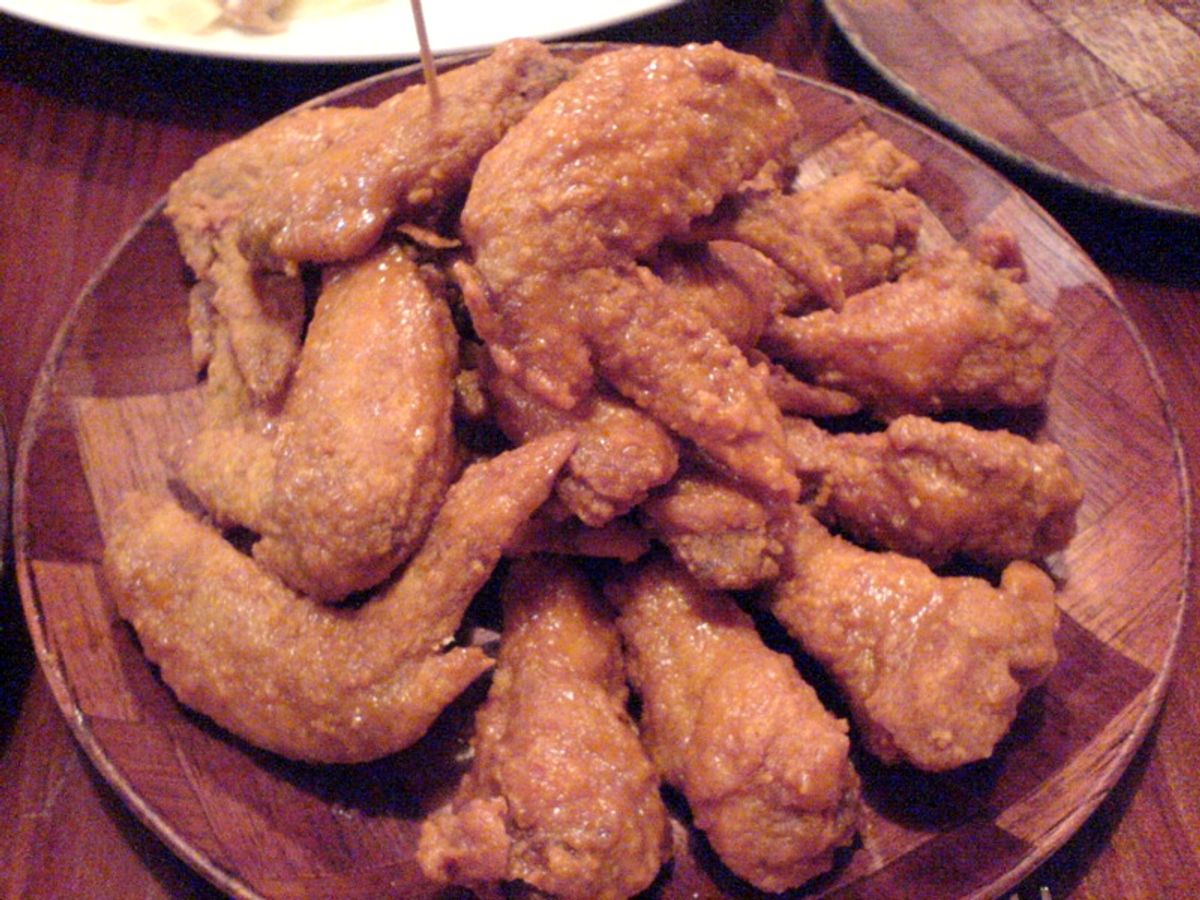 This winning entry for the Salon Kitchen Challenge -- in which we asked readers to come up with their best chicken wing recipes and stories -- comes to us courtesy of Stephen Easley. (It's presented in edited form here; for the full version, go to his blog.) Check out this week's Challenge here.

In high school I worked as a busboy at an Elk's Lodge until a seriously drunken Elk offered to throw me through a large plate glass window. I graduated college a semester early in 1973 because the draft had ended, so to support myself I worked a stint at a restaurant called Lum's, where I cooked and pulled about a million pitchers of beer. I hated that job for two reasons: 1) While I was in the back slopping around, all of the college kids who were smart enough not to graduate early were out front eating and playing drinking games; and 2) every night I had to filter the boiling hot fryer oil, which left me one move away from third-degree burns and perpetually smelling of bad French fries. Naturally, I vowed to myself that no matter how desperate I may be, I would never work in food service again. Ever.

But in the summer of 1975, my wife, Sue, quit her punk insurance job to go back to school and I hit the streets in search of "summer employment" with the economy in a shambles. Turns out no one was looking for a first-year graduate student in biological anthropology with a B.A. in Spanish language and literature to boot, even if this was all done at reputable universities. That realization, and a rumpled want ad, led me to Jackie's Place.

Jackie's Place was an upscale sports bar-restaurant in an upscale suburb of St. Louis. The owner and namesake, Jackie Smith, was a legend and a hero in St. Louis -- he played tight end for the St. Louis Cardinals from 1963 to 1977, was the offensive team co-captain, went to the Pro Bowl for five straight years, and set several team and NFL records that stood for years. Sadly, I was largely unaware of most of this at the time as I was not into sports.

The want ad called for a cook. I detested the idea of working as a cook again, but a job is a job and money is money. On Monday morning, I met Rita, the general manager. She looked at my paperwork, we chatted for about 10 minutes, and then she said, "Can you cook?"

She said, "Go in the kitchen and cook lunch. The cook didn't come in today."

It was insane. I quickly went through everything in the kitchen looking for food, plates, pans, utensils, whatever I might need. I grabbed a menu and made a quick dash down the list of offerings and fired up the stove as high as it would go. Then the waitresses started bringing in the orders from the lunch rush. It was furious: I was slapping out burgers and sandwiches and fries and rings and chicken and shrimp and just making it all up as I went, as quickly as I could dish it out. It was like being on a reality TV show, except that nobody had ever heard of reality TV in 1975.

Finally the lunch rush was over and everybody got fed and nobody complained, at least to me (I had sharp knives). Rita strolled in casually and said, "Come back tomorrow." It occurred to me then that I wasn't getting paid for today. Good times.

When I came back the next morning, Rita said, "I have another idea. I want you to be the manager of Jackie's Place. We'll get another cook. Marty the Bartender is the manager now, but he is an alcoholic who drinks from the bar and steals from the till, so you have three days to get him to teach you everything he knows, then we will fire him." I protested that I knew nothing about being a bartender or managing a restaurant. She said, "Hmmm," and left.

For three days Marty taught me everything he knew, which fell primarily into two categories: 1) how to drink all day at the bar without getting caught; and 2) how to skim the till without getting caught. He seemed like a pretty nice guy, but considering what I knew about his fate I didn't feel inclined to follow any of his advice. I think he knew he was going to get fired, but he did not really seem to care. However, the waitresses cared, for they all loved Marty (probably for the free drinks he made them) and they hated me for stealing Marty's job. Waitresses who hate you when you are new can really make your life unpleasant.

I spent the rest of the summer working 14-hour days, six days a week and hating every minute of it -- managing, taking care of the money, ordering food and supplies, listening to the waitresses bitch about nearly everything. I tended bar and listened to the endlessly tedious stories of the drunken salesmen who fritter away their expense account-fueled days in places like that. I discovered that for drunken daytime salesmen, you don't have to have many bar skills. Put whiskey or gin or vodka in a glass with some ice and there you are. Just keep 'em comin'.

From time to time Jackie Smith liked to come into the bar and hang out. He was, not surprisingly, a big man, with light-colored eyes, reddish-blond hair, pinkish-white skin, a zillion freckles, and forearms like country hams. He was born in Mississippi but lived and went to college in northern Louisiana. I think you get the picture. He was softly spoken and had a lovely blond wife and several little kids. His wife taught me to make authentic Louisiana gumbo.

I think Jackie liked me -- maybe because I worked hard, maybe because I was not all that taken by his football stardom. In any case, one day I was tending bar and probably looking a little bedraggled, and he said to me, "Come into the kitchen, kid, I want to teach you something." And he proceeded to teach me to make Jackie Smith's Louisiana Hot Wings. It is a simple recipe, really, just a few ingredients. He was adamant that you have to eat them fresh, as hot out of the fryer as you can stand them. I don't think that Jackie knew how to cook anything else, but this one thing was enough. He whipped up a batch and we ate them on the spot and angels wept.

As he left the kitchen, I said, "So, Jackie, are these Louisiana Hot Wings?" And he said, "Son, screw those son-of-a-guns from Buffalo."

Serves one person if you are a teenage boy, more if you are normal people