Militia planned attack on police as beginning of battle against Antichrist 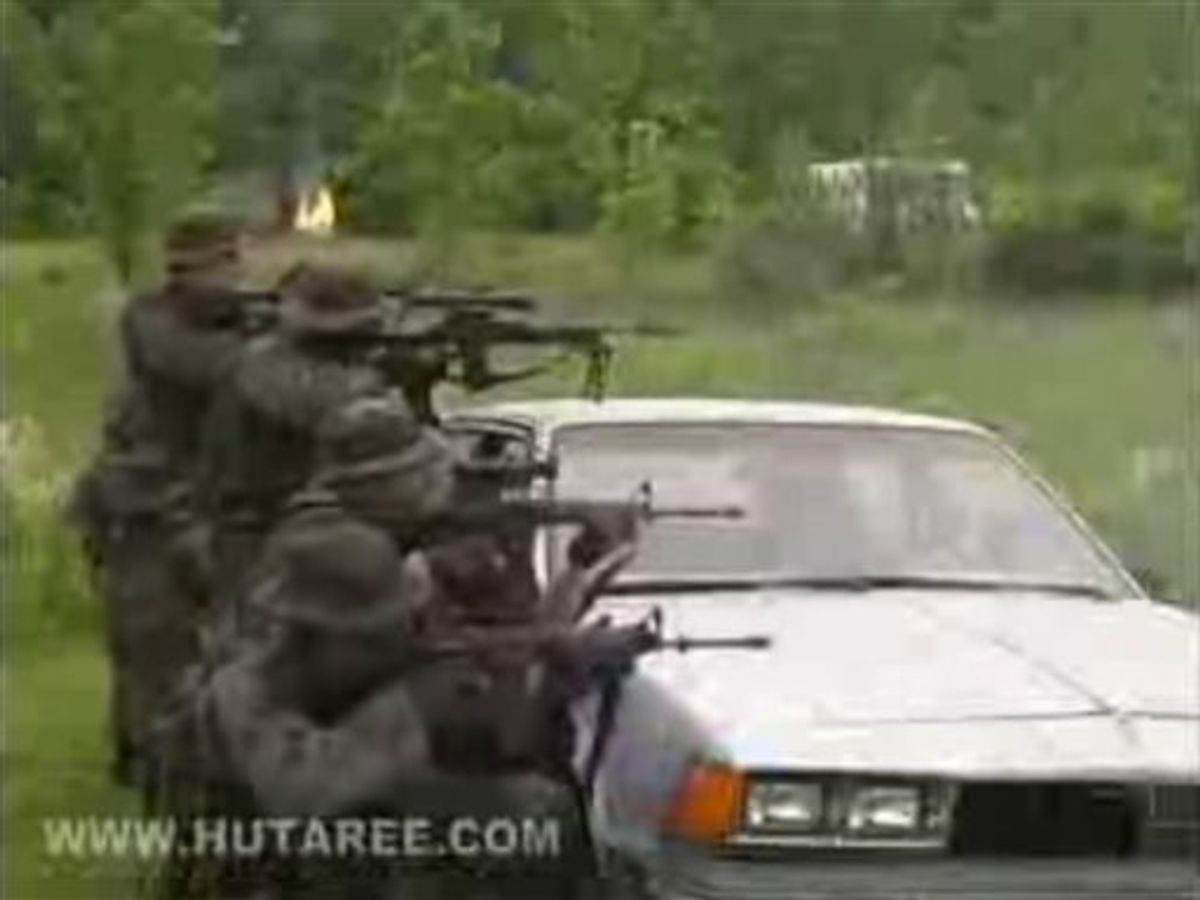 This screen grab made Monday March 29, 2010 from the Christian militia group Hutaree's site allegedly shows training videos. Nine suspects tied to a Christian militia that was preparing for the Antichrist were charged with conspiring to kill police officers, then kill scores more by attacking a funeral using homemade bombs, federal prosecutors said Monday. The Michigan-based group, called Hutaree, planned to use the attack on police as a catalyst for a larger uprising against the government, according to newly unsealed court papers. (AP Photo/Hutaree.com) NO SALES (AP)
--

A ninth suspected member of a Christian militia group that prosecutors say was preparing for battle against the Antichrist and the U.S. government is to be arraigned Tuesday in federal court, the U.S. Attorney's Office said.

Joshua Matthew Stone surrendered without a fight Monday night after the FBI played messages over loudspeakers from family and friends urging the 21-year-old from Clayton, Mich., to give himself up. He had been hiding inside a home in Hillsdale County's Wheatland Township along with five other adults and a child.

Stone's father and seven others believed to be part of the Michigan-based Hutaree militia group appeared in court earlier Monday on charges that they had plotted to kill a police officer then slaughter scores more by bombing the officer's funeral -- all in hopes of touching off an uprising against the government.

Stone was the only suspect not arrested during FBI raids in Michigan, Indiana and Ohio at the weekend.

Prosecutors said Hutaree members were planning an attack sometime in April. FBI agents seized guns but would not say whether they found explosives.

The arrests dealt "a severe blow to a dangerous organization that today stands accused of conspiring to levy war against the United States," Attorney General Eric Holder said.

In an indictment, prosecutors said the group began military-style training in the Michigan woods in 2008, learning how to shoot guns and make and set off bombs.

The indictment identified 44-year-old David Brian Stone of Clayton as the group's ringleader, and said he had appointed his son Joshua as an operational unit leader. Stone, known as "Captain Hutaree," organized the group in paramilitary fashion, prosecutors said. Ranks ranged from "radoks" to "gunners," according to the group's Web site.

"It started out as a Christian thing," Stone's ex-wife, Donna Stone, told The Associated Press. "You go to church. You pray. You take care of your family. I think David started to take it a little too far."

After Joshua Stone's surrender, other adults at the home were taken into custody, and a determination about whether they will face charges will be made later, according to Andrew Arena, head of the FBI's field office in Detroit. The child was 1 or 2 years old, he said.

Other details, including whether those in the house were affiliated with Hutaree, weren't immediately released. Joshua Stone and his family were familiar with the area and may have done some training there, though not necessarily at the site where he was apprehended, Arena said.

Prosecutors said the elder David Stone had identified certain law enforcement officers near his home as potential Hutaree targets. He and other members discussed setting off bombs at a police funeral, using a fake 911 call to lure an officer to his death, killing an officer after a traffic stop, or attacking the family of an officer, according to the indictment.

After such attacks, the group allegedly planned to retreat to "rally points" protected by trip-wired explosives for a violent standoff with the law.

"It is believed by the Hutaree that this engagement would then serve as a catalyst for a more widespread uprising against the government," the indictment said.

The charges against the nine suspects include seditious conspiracy -- plotting to levy war against the U.S. -- possessing a firearm during a crime of violence, teaching the use of explosives, and attempting to use a weapon of mass destruction -- homemade bombs.

Hutaree says on its Web site its name means "Christian warrior." The group quotes several Bible passages and declares: "We believe that one day, as prophecy says, there will be an Anti-Christ. ... Jesus wanted us to be ready to defend ourselves using the sword and stay alive using equipment."

The Web site does not list specific grievances against law enforcement and the government.

The site features a picture of 17 men in camouflage, all holding large guns, and includes videos of armed men running through the woods. Each wears a shoulder patch that bears a cross and two red spears.

"Their Christian apocalyptic vision is quite different from most other militias," Beirich said. "Most don't put their religion first -- they're more concerned with out-of-control federal government."

The wife of one of the defendants described Hutaree as a small group of patriotic, Christian buddies engaged in survival training.

"It consisted of a dad and two of his sons and I think just a couple other close friends of theirs," said Kelly Sickles, whose husband, Kristopher, was among those charged. "It was supposed to be a Christian group. Christ-like, right, so why would you think that's something wrong with that, right?"

Sickles said agents seized the guns her 27-year-old husband collected as a hobby and searched for bomb-making materials at her home near Sandusky, Ohio, but added: "He doesn't even know how to make a bomb."

One defendant expressed anti-tax views during his Monday court hearing. Thomas W. Piatek, a truck driver from Whiting, Ind., told a federal judge he could not afford an attorney because he was "getting raped on property taxes."

The mother of another defendant, 33-year-old Jacob Ward, told police in Huron, Ohio, last summer that family members took away his two guns -- an AK-47 rifle and a semiautomatic pistol -- because she thought he needed mental health treatment.