The U.S. is stuck in the Cold War

America is following security and trade policies that made sense just after World War II, but are disastrous now 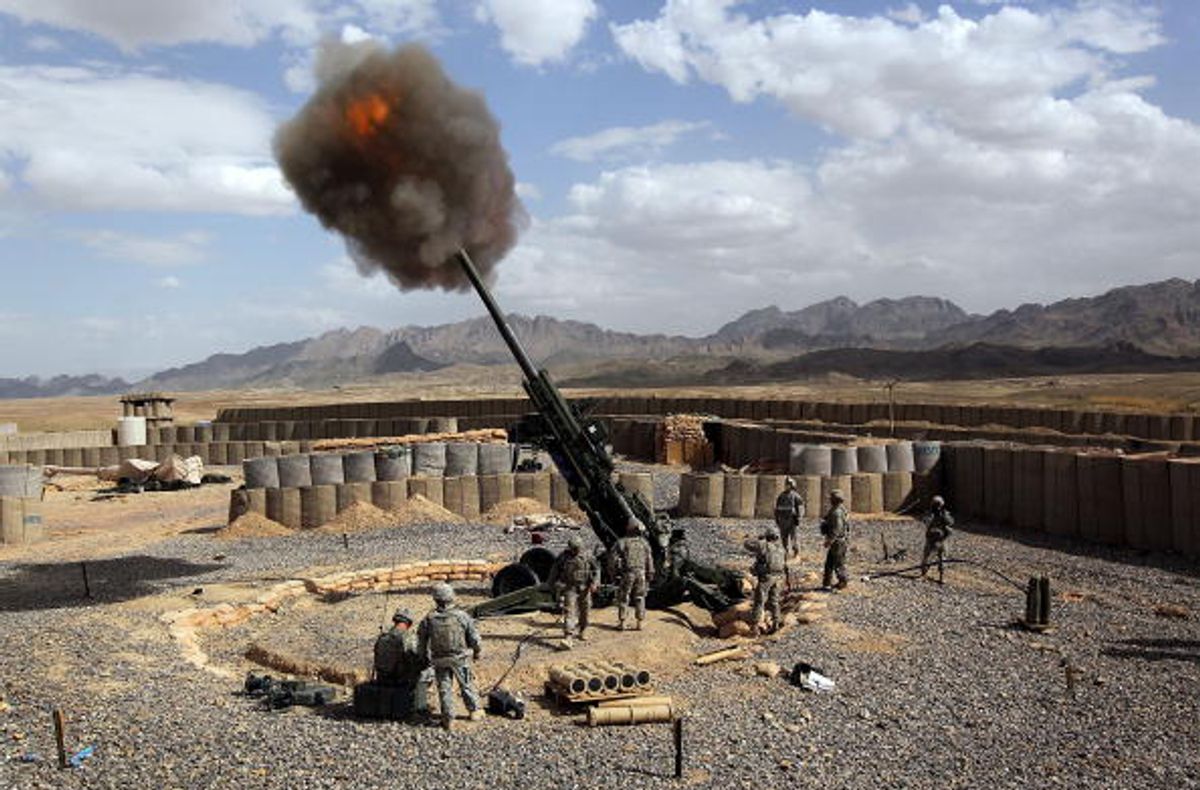 FORWARD OPERATING BASE FRONTENAC, AFGHANISTAN - MARCH 05: U.S. Army soldiers from the 3-17 Field Artillery fire a 155mm Howlitzer at a Taliban observation point on March 5, 2010 from Forward Operating Base Frontenac in Kandahar province in southern Afghanistan. The U.S. military is expected to launch a major offensive against Taliban insurgents in Kandahar in upcoming months following its recent operation in Marja, in neighboring Helmand province. (Photo by John Moore/Getty Images) (John Moore)
--

What does America's deepening war in Afghanistan have to do with the American trade deficit? Answer: Both are the results of Cold War policies that made sense at one time but are now harmful to the United States.

During World War II, the Roosevelt administration planned for a postwar world in which the wartime cooperation of the Big Three -- the United States, Britain and the Soviet Union -- would continue indefinitely. The Bretton Woods system was designed to allow countries to pursue domestic policies of full employment and to avert the kind of trade wars and beggar-thy-neighbor currency revaluations that had wrecked the global economy in the interwar years.

But the Cold War divided much of the world between rival blocs, symbolized by the division of four countries -- Germany, China, Korea and Vietnam -- into communist and non-communist states.

During and after the Korean War, the U.S. rebuilt its military and stationed troops along "tripwires" from Central Europe to East Asia. The U.S. encouraged the formation of the European Common Market (now the European Union) in part to provide the West Germans with markets. In Asia, Mao Zedong's victory in China cut off Japan's China market, so the U.S. offered the American market to Japanese exporters, which initially were not considered a threat to American businesses.

Thus began the Grand Bargain at the heart of U.S. Cold War strategy toward West Germany and Japan, the "markets-for-bases" swap. In return for giving up an independent foreign policy to their protector, the United States, the West Germans and Japanese would be granted access to American markets (and, in the case of the Germans, access to Western European markets).

By the 1970s, it was clear that the markets-for-bases swap was a better deal for West Germany and Japan than for the U.S. They recovered from the devastation of World War II and won growing shares of global markets in automobiles and, in the case of Japan, consumer electronics.

Japan did so by boldly unfair "mercantilist" measures, like non-tariff barriers that kept U.S. imports out of Japan, and interlocking corporate ownership patterns that froze American and other foreign investors out of Japanese multinationals. When American manufacturers complained about this double standard, however, the Pentagon and State Department warned that to crack down on unfair Japanese trade practices would endanger the markets-for-bases swap at the heart of Cold War strategy.

The markets-for-bases deal should have been scrapped when the Cold War ended and there was no longer any need to favor American allies with one-way trade privileges in return for their support of U.S. military objectives in their regions. Unfortunately, the Cold War lasted long enough for two completely separate American foreign policy establishments -- the security establishment and the economic establishment -- to develop and take separate paths.

The American security establishment, dominating both parties, wanted the U.S. to expand its overseas commitments after the Cold War, not reduce them. Under both Clinton and Bush the U.S. expanded NATO to the borders of the Soviet Union, consolidated America's position as the hegemon of the Persian Gulf, maintained America's bases in Japan and South Korea, and encircled China and Russia with new bases in Central Asia, whose strategic usefulness was not limited to the war against a small number of jihadists.

Meanwhile, in a different part of the building, the economic establishment was living in a fantasy world, ignoring the markets-for-bases swap and pretending that every country in the world believed in Chicago School free-market fundamentalism. A version of the markets-for-bases deal was extended to China, which, it was hoped, would acquiesce in U.S. military hegemony in its own neighborhood, in return for unlimited access to American consumers.

George W. Bush made the deal explicit in his 2002 West Point address: "America has, and intends to keep, military strengths beyond challenge -- thereby making the destabilizing arms races of other eras pointless and limiting rivalries to trade other pursuits of peace." U.S. to other great powers: We make wars, you make cars.

China, like West Germany (now Germany) and Japan before it, took the U.S. up on the offer. In seeking to persuade multinationals to close down production in the U.S. and make things in China, the Chinese government cheated in various ways, confident perhaps that the U.S. foreign policy establishment, invoking diplomatic and national-security considerations, would intervene on its behalf against American manufacturers and workers. Like postwar Japan and Germany, China has accepted the terms of the bargain America's elites offered, focusing on economic growth while the U.S. wasted blood and treasure on wars in Iraq and Afghanistan.

But now the markets-for-bases deal has broken down, because American consumers are tapped out. The bargain nearly broke down in the 1990s, when a Japanese-American trade war was averted only by the economic collapse of Japan.

In the 2000s, debt-fueled consumption in the U.S. kept the system going for a while. China kept its currency low by using its huge dollar surpluses to buy U.S. federal debt, thereby keeping interest rates low and allowing Americans to borrow to pay for Chinese imports. But like all Ponzi schemes, this collapsed, leaving China with overbuilt export capacity and not enough customers either in the U.S. or at home, where the consumption of the Chinese people has been ruthlessly suppressed.

For half a century America's economic establishment, turning a blind eye to Asia's crude and Germany's subtle mercantilism, pretended that American protectionism was the greatest threat to the world economy. It is gradually dawning even on former free-trade fundamentalists that you cannot have a liberal global trading system in which three of the four largest industrial capitalist countries -- China, Japan and Germany -- pursue policies that permit them to enjoy perpetual trade surpluses, which require perpetual trade deficits by the U.S. and other countries.

Meanwhile, the security half of America's global strategy is headed for a crash as well. Since the end of the Cold War, the U.S. has mindlessly sought to fill every power vacuum from the Balkans to the Persian Gulf to Central Asia, while spending far less on the military than it did in the Cold War. The U.S. has gone into debt to finance the Iraq and Afghan wars. You don't have to be a grand strategist to figure out that extending territorial commitments without commensurately expanding funding and troop levels is a formula for strategic and perhaps national bankruptcy.

By declaring that the new deficit commission would not consider any cuts in military spending, only in entitlement spending, President Obama reflected the preferences of America's policy elite. Its members would gladly cut Social Security and Medicare in order to pay for bases and "nation-building" abroad. In the same way, for half a century, America's foreign-policy elite tolerated the targeted deindustrialization of America by Asian mercantilist states, as long as those countries did not challenge America's global military hegemony.

There are signs, however, that the American people and their representatives in Congress, if not the White House, are ready to reject a Cold War system under which the U.S. gives away its industries while wasting taxes and the lives of its soldiers on quixotic crusades in the lands of the former British empire.

Members of Congress are threatening to use tariffs to punish China for its unfair currency manipulation policies if the Obama administration does not name China as a currency manipulator on April 15. And while the public has acquiesced in escalation of the war in Afghanistan, if the choice comes down to balancing the budget by slashing the Pentagon or slashing Social Security, it is not clear that the Pentagon will win. After all, massive post-Cold War cuts in Pentagon spending, along with tax revenues raised by the tech stock bubble, permitted the budget to be balanced under Clinton.

For the time being, however, America's out-of-touch foreign policy establishment continues to favor the policy of expanding America's geopolitical frontiers while allowing our self-interested industrial rivals to hollow out the American economy. Policies that made sense in the early years of the Cold War emergency continue to be followed out of inertia, when their original strategic rationale has long since vanished. In the words of the philosopher George Santayana, "Fanaticism consists in redoubling your effort when you have forgotten your aim."