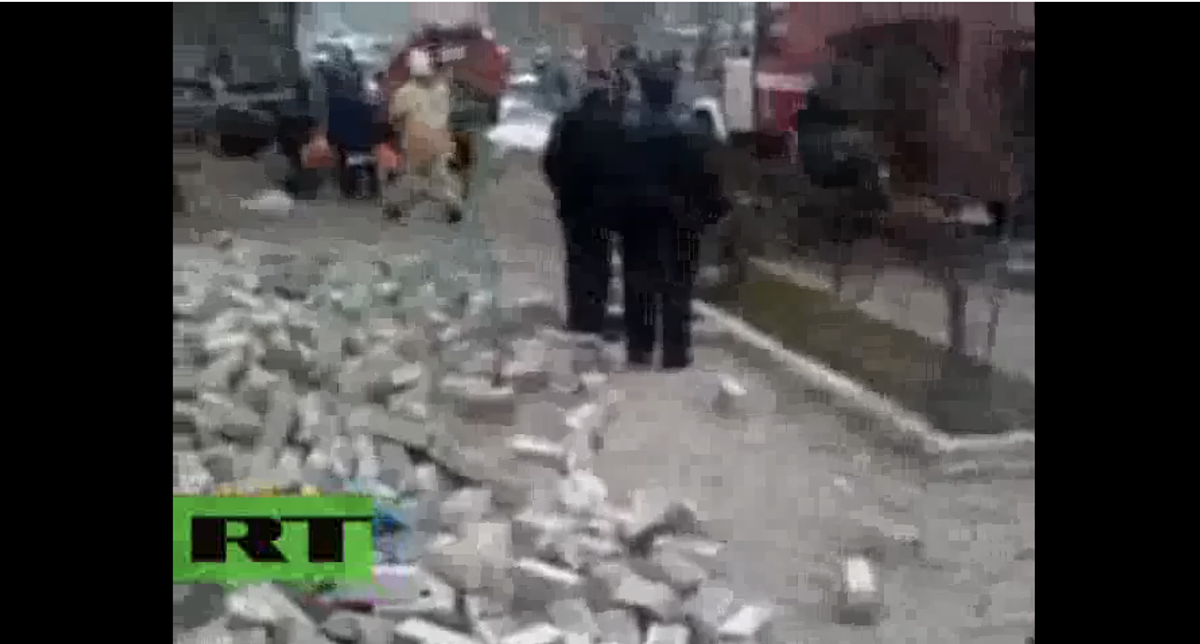 Two suicide bombers targeted authorities in southern Russia on Wednesday, killing 12 people, including nine police officers. Prime Minister Vladimir Putin said the blasts may have been organized by the same militants who attacked the Moscow subway.

The attacks Wednesday came after the powerful former president had vowed to "drag out of the sewer" the terrorists who plotted Monday's twin subway bombings, which killed 39 people and injured scores of commuters during rush hour.

Wednesday's blasts struck in Dagestan, one of the provinces in Russia's volatile North Caucasus that have been destabilized by near-daily bombings and other raids by Islamic militants.

"I don't rule out that this is one and the same gang," Putin said at a televised Cabinet meeting. President Dmitry Medvedev later called the attacks "links of the same chain."

No one has claimed responsibility for either of the attacks.

The subway bombings in Moscow were first suicide attacks in the Russian capital in six years and shocked a country that had grown accustomed to having such violence confined to its restive southern corner. They followed a warning from an Islamic militant leader that the militants would bring their struggle to the heart of Russia.

Moscow police have been on high alert since the subway attacks, beefing up roadblocks on highways leading into the city. The agency's chief said Wednesday that thousands of officers have been sent to patrol the subway, check on migrants from southern provinces and inspect warehouses that could hold arms caches.

Families and friends mourned subway victims at funerals around Moscow on Wednesday, sobbing especially for young people like Maxim Mareyev, a 20-year-old student.

In Wednesday's attack, a suicide bomber in a car detonated explosives when police tried to stop the car in the town of Kizlyar near Dagestan's border with Chechnya, Interior Minister Rashid Nurgaliyev said.

"Traffic police followed the car and almost caught up -- at that time the blast hit," Nurgaliyev said.

As investigators and residents gathered around the scene of the blast, a second bomber wearing a police uniform approached and set off explosives, killing the town's police chief among others, Nurgaliyev said.

In addition to the dead, at least 23 other people were injured, authorities said. Windows were blown out and bricks tumbled down at a school and a police station nearby.

Grainy cell phone video footage posted on the life.ru news portal showed the moment of the second blast, with officials wandering past a destroyed building before a loud clap rings out and smoke rises in the distance. Television pictures later showed a few gutted cars, damaged buildings and a 2-meter (six-foot) deep crater in the road.

Police and security services are a frequent target because they represent the Kremlin -- the militants' ideological enemy -- but also because of their heavy-handed tactics. Police have been accused of involvement in many killings, kidnappings and beatings in the North Caucasus, angering residents and swelling the ranks of Islamic militants.

A report by the Center for Strategic and International Studies said 916 people died in the North Caucasus in 2009 in violence related to the clashes, up from 586 in 2008. Another monitoring group, the Caucasian Knot, reported the region suffered 172 terrorist attacks last year, killing 280 people in Chechnya, 319 in Ingushetia and 263 in Dagestan.

In January in Makhachkala, Dagestan's capital, a suicide bomber blew up a car at a police station, killing six officers. In August, 24 people died and more than 200 were injured when a man crashed a bomb-laden van into the police station in Nazran, Ingushetia.

The bloodshed has continued despite Kremlin efforts to stem it. Medvedev, who claims the militants have spread through the North Caucasus "like a cancerous tumor," this year appointed a deputy prime minister to oversee the troubled region and address the root causes of terrorism, including dire poverty and corruption.

Monday's subway bombings, carried out by two women, were the first terrorist attacks in Moscow since 2004.

The first blast struck the Lubyanka station in central Moscow, beneath the headquarters of the Federal Security Service or FSB, the KGB's main successor agency. The FSB is a symbol of power under Putin, a former KGB officer who headed the agency before his election as president in 2000.

About 45 minutes later, a second blast hit the Park Kultury station on the same subway line, which is near the renowned Gorky Park. In both cases, the bombs were detonated as the trains pulled into the stations and the doors were opening.

Associated Press writers David Nowak in Moscow and Sergei Venyavsky in Rostov-on-Don contributed to this report.