Who needs sandbags when you've got unpublished manuscripts to sop up the water? 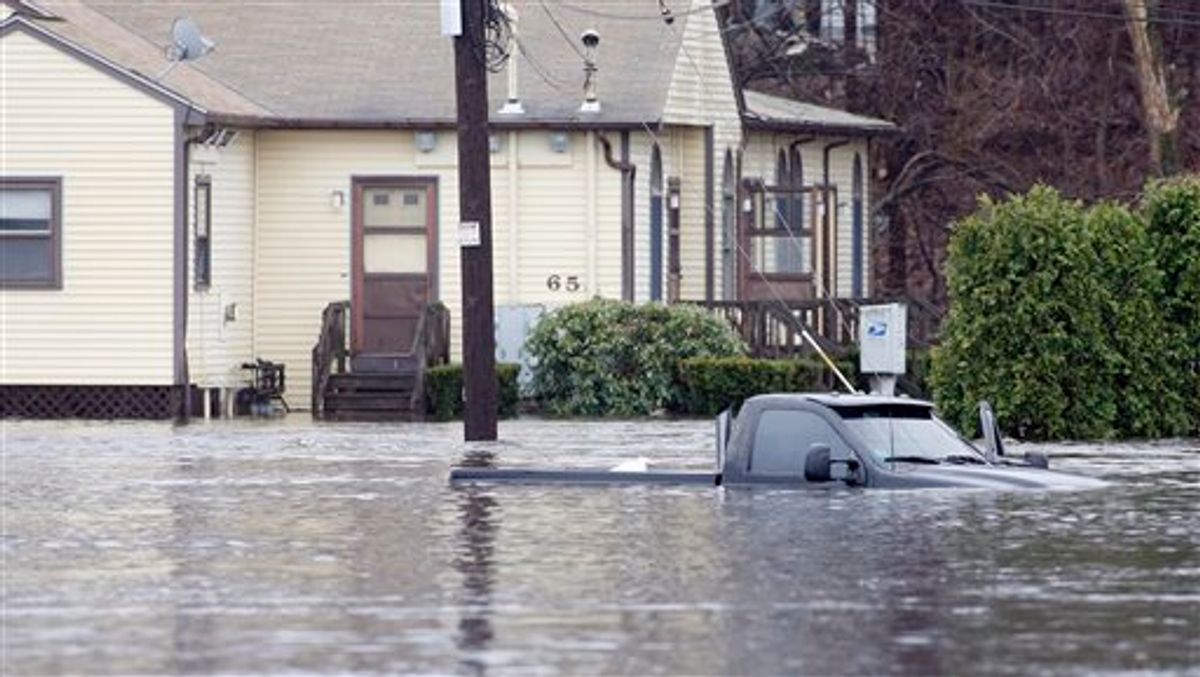 SEEKONK, Mass. When Armand St. Stephen, a recent graduate of Tulane University, heard that New England had been inundated with unprecedented spring rains, the New Orleans native who survived Hurricane Katrina decided to do something about it. "It's not enough to do a heckuva job," he says, recalling former President Bush's premature praise of FEMA Director Michael D. Brown. "You've got to do a helluva heckuva job."

Brown:  "We can appease the weather gods if we give them Baton Rouge."

So St. Stephen, who earned his degree in creative writing, called up the Army Corps of Engineers and suggested a new and unlikely source of raw material: unpublished manuscripts by writers across America.

"When you mix a 400-page coming-of-age novel with a little flour, water and glue, you get a substance that makes a pretty darn good flood prevention device," said Chief Engineer Warren Lamont. "Of course, it looks like an elementary school science project, such as 'How a Volcano Works' or 'When Dinosaurs Walked the Earth', but we're not in the landscape gardening business here."

The idea of linking unpublished writers with reconstruction efforts has a Keynesian "multiplier" effect, according to David Simon, an economist at the University of Massachusetts-Seekonk. "If we can get underemployed writers -- and believe me, they're all underemployed -- to crank out a short story collection at prevailing wages, then use it to fuel a waste-to-energy plant, we will ease unemployment and cut our dependence on foreign oil."

Faulkner:  "Thanks to my Nobel Prize winnings, I can afford to maintain my savage tan."

St. Stephen is currently working on a three-volume family saga in the manner of William Faulkner's Yoknapatawpha County novels. "It's a stream of consciousness novel told through the voice of Darrell Suggins, the feeble-minded product of inbreeding between the offspring of a morganatic marriage between a scion of the old Southern dynasty and a syphilitic prostitute," he says. St. Stephens provided this reporter with a sample dependent clause from a sentence of his work-in-progress:

. . . and it was not the knowingness or the beingness between the two who were the issue or the effluvium of their polar opposite forebears who yet shared the sameness and the oneness of the South yes the South with its crape myrtle and Yoo-Hoo Chocolate Soda and lightning bugs even though the drinking fountain yes the drinking fountain at Sonny Tufts Park in Atlanta had been shared yes shared by them illicitly and implictly even though serially and even though one was white and one black.

St. Stephen has been unable to find a publisher for the tome, and will ship his manuscript in three semi-trailer trucks to a processing plant in Shirley, Mass., where it will be mixed with uneaten fish sticks from the cafeteria at Bernie Carbo Junior High School to give it more substance.

Other writers with specialized literary talents are excited about the program, and eager to participate. Dorothy Danville, an author of romantic novels disparagingly referred to as "bodice rippers" in the industry, has donated a 500-page draft of "Love's Conquering Climax" to the cause, after trying for several years to sell it to Harlequin Books. "Ms. Danville's works are very viscous, if I may use a 50-cent word," said Dick Martin, Director of Public Works for New Bedford, Mass. "People are using them for caulking, tuckpointing brick structures and roof tar."

Con Chapman, a Midwestern transplant to Boston, donated an unsold humor collection to Portland, Maine, which rejected the shipment when it failed to pass inspection. "Up here we like our humor dry," said City Manager Floyd Oehrke. "Bounty, the Quicker Picker-upper, is more absorbent and frankly funnier than what this guy puts out."

Chapman was undeterred, and said he would send a container-load of material from the Massport Marine Terminal in South Boston as soon as a ship large enough to carry it arrived in port. "And that," he noted proudly, "will be just my rejection letters."