In Kentucky, Rand Paul might kill GOP consensus on terrorism

The tea-partying isolationist looks likely to win his Senate race, jeopardizing the Republican message on terrorism 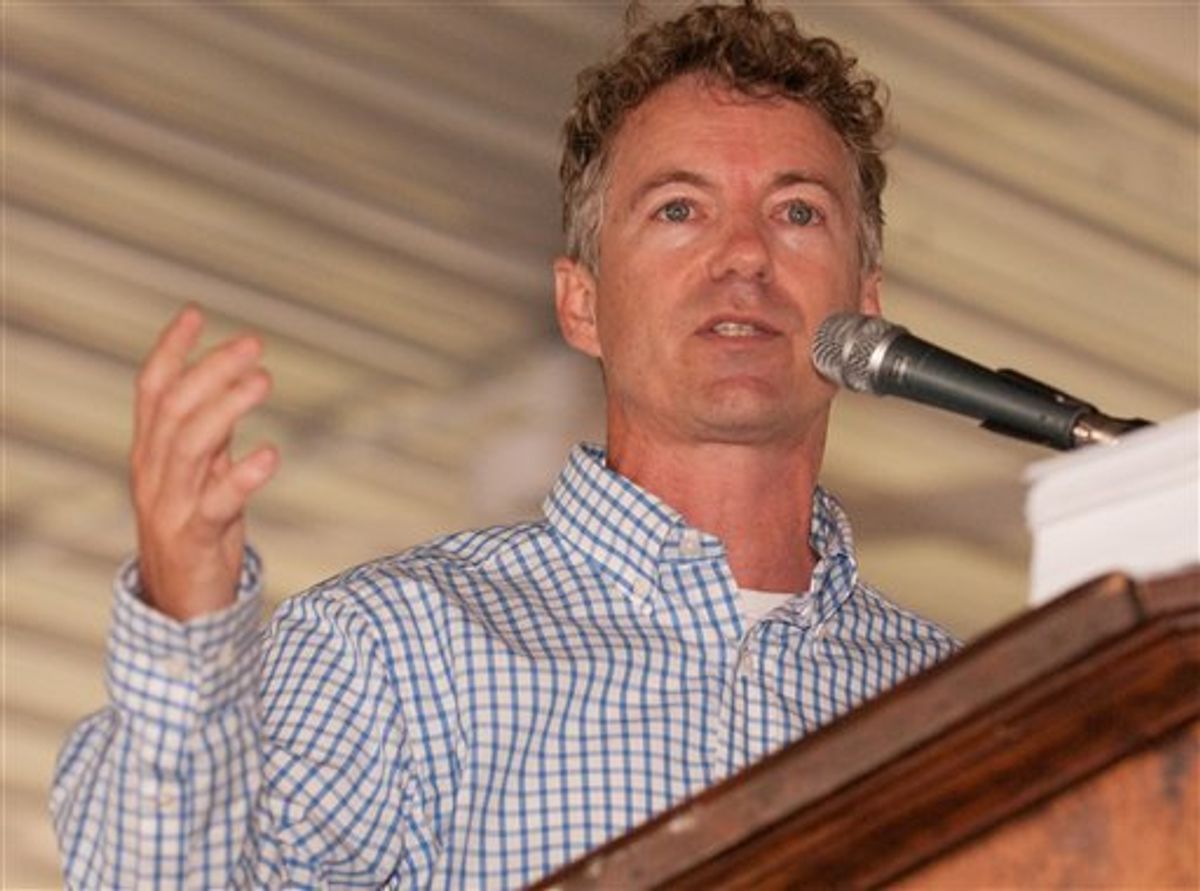 Here’s something odd: we're now well into an election year, and we aren't yet constantly talking about it. Probably because an ambitious president and his agenda have dominated political coverage so far, surprisingly little media attention has dripped down to fights for Senate seats and governorships and so on.

One race that's worth a new look is the contest for the seat of retiring Sen. Jim Bunning, R-Ky. GOP leaders pushed Bunning out last year in favor of the candidate they’d lined up, Kentucky Secretary of State Trey Grayson. The Democrats have a couple of strong possible nominees, but it's a pretty solidly conservative state, and Grayson is an orthodox, if uninteresting, conservative choice. In other words, if it's July 2009, you’re betting on Grayson.

It’s a measure of the weird turn of American politics, then, that Grayson is now waging a desperate-seeming comeback effort for his party’s nomination, against Dr. Rand Paul, an ophthalmologist and the son of former presidential candidate Rep. Ron Paul, R-Tex. A savvy campaign by Paul seems to have tapped into the populist anti-government sentiment growing on the right. In catching up with and passing Grayson, he’s landed a Sarah Palin endorsement and piled up "moneybomb" donations like his dad did in 2007. It now seems pretty clear that Paul is the favorite for the May 18 primary.

After trailing Paul for months in the polls, Grayson is now going after him in what seems like it should be his softest spot: like his father, Rand Paul isn’t that interested in conservative orthodoxy about terrorism and national security. He’s echoed his father on the idea that terrorism is not fueled by "who we are," but "what we do."

Grayson has released a web ad that emphasizes the similarity of the Pauls, father and son, showing both saying things like, "We have to understand that there is blowback for our foreign policy." The video then cuts to footage of Rev. Jeremiah Wright in his Chicago church, who is making much the same point.

In case you missed the point, Grayson is airing an ad on Kentucky stations that says, "Paul even wonders whether 9/11 was our fault."

Paul has shot back with a 30-second television spot saying that after September 11, "fighting back was the right thing to do," and accusing Grayson of politicizing the tragedy. Although the response doesn’t emphasize his dissent from the party line, it's pretty clear that Paul will have little in common with other Republican senators on this set of issues, should he be elected. And that, presumably, is why the GOP establishment is determined to kill his candidacy.

It's not the case, as with so many successful primary insurgencies, that Paul is seen as unelectable: the guy polls ahead of both possible Democratic opponents. It's that he's seen as, potentially, the Republicans' Joe Lieberman -- not in that he's a sanctimonious moderate, but in that he'll be an attention-grabbing dissenter.

Since September 11, the GOP has been generally succeeded in maintaining almost universal party discipline on war and terrorism issues. There have been, here and there, some obscure members of Congress who turned against the war, or moments of halfhearted criticism of detention policies from Republicans. But if Paul wins the primary, he won't just become, like Lieberman, a media go-to critic of his own party. He'll also show that terrorism may no longer suffice as the glue that holds together Republican coalition. As with the Cold War, say, 60 years ago, an aggressive, nationalist response to September 11 was one thing around which Republicans had no problem forming a consensus. If Paul wins, does it mean the magic has gone away? Does the GOP base care more about the Federal Reserve than about Afghanistan or Guantanamo?

It should be obvious, then, why former Vice President Dick Cheney decided to intervene in this race on Grayson's side. Cheney definitely cares way more about Afghanistan and Guantanamo than about the Federal Reserve.